Doctor Who S13E03 Review: Once, Upon Time – Wibbly-wobbly, timey-wimey

After the near destruction of the universe by the Flux in “The Halloween Apocalypse” and Sontarans trying to take over Earth throughout history in “War of the Sontarans,” the third episode of Doctor Who‘s Season 13 takes us to a somewhat more exciting adventure. Apparently, Chris Chibnall’s penned this episode by taking all the component narrative elements and putting them into a blender with the “Ice Crush” setting stuck on high. However, once the concoction of seemingly chaotic and disparate elements is finished mixing, the viewers start to realize that the initial mess was by design and that it arranges itself into a coherent story as it spreads on the imaginary surface.

The episode introduces a new character to the story, Bel, portrayed by Thaddea Graham. She’s packing her stuff in a rush while recording a message for an undisclosed someone, reporting on the devastating effects of the Flux and their aftermath. A company of coppery Daleks appears, informing us, through Bel’s message, that Sontarans aren’t the only ones making last-minute power plays, conquering the bits of Flux-ravaged universe. Daleks are on the warpath, too, making last-minute grabs to rule over, if nothing else, the dust that remains. But Daleks aren’t Bel’s only concern – a mysterious swirling cloud of blue mites feasts upon two humans who managed to survive the Flux. 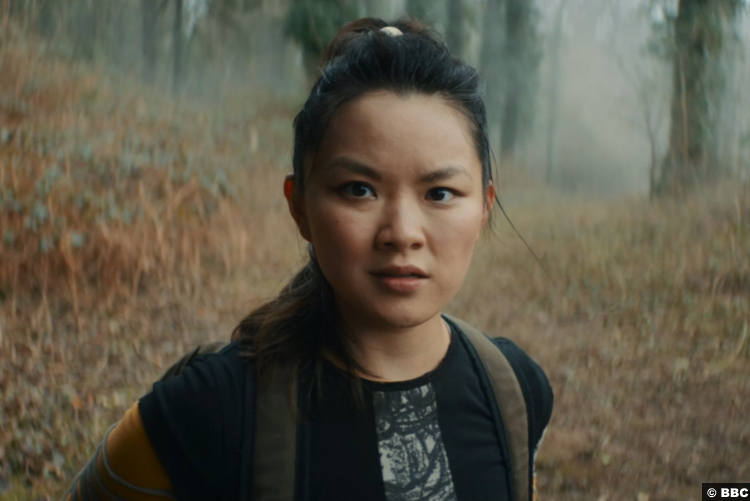 Meanwhile, at the Temple of Atropos, the Doctor’s (Jodie Whittaker) mind is going into overdrive, as Swarm is about to snap his fingers and dose Yaz (Mandip Gill) and Vinder (Jacob Anderson) with the unrestrained flow of Time. Needless to say, such exposure would kill both of them. So, thinking on her feet, the Doctor and Dan take the places of the missing Mouri, and the Doctor uses her sonic screwdriver to put them in the heart of the time storm, with the ultimate plans to hide her friends in their respective timestreams.

In the timestream, at least from the Doctor’s perspective, the trio disappears into their own timestreams, while a Weeping Angel appears in their stead, surprising the Doctor. Seconds later, she’s standing outside the Temple of Atropos with Vinder, Yaz, and Dan, donned in strange uniforms, which only further confuses the Doctor, which the trio immediately dismisses as something called “temporal haze.” However, she quickly snaps out of her confusion and orders the group to end the Ravagers’ siege on the Temple, rescue the hostages, and reset Time so that the universe can function again.

Dan ends up in Liverpool drinking coffee and walking with Diane (Nadia Albina) as they keep inexplicably blipping through several locations in the city. He spots the very same blue mites Bel saw while escaping Daleks. We do learn some bits of his personal information, like that he was engaged to be married 15 years ago, but his fiancée ended the engagement a few days before their wedding. At one point, Dan starts questioning his reality, wondering “When” he is, before spotting the Passenger from the previous episode. 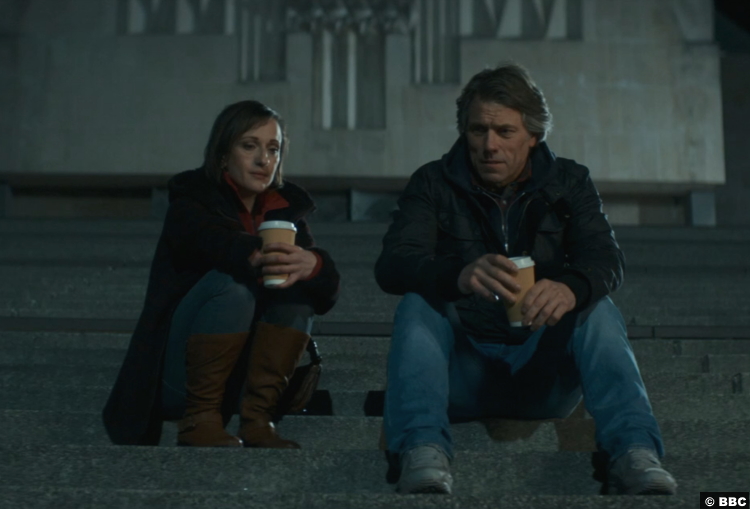 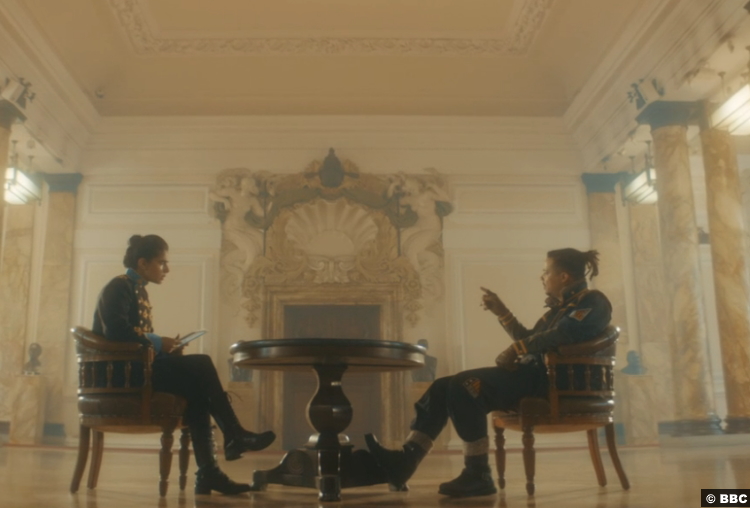 On the other hand, Yaz is sitting in a police car dressed in her police uniform. She spots a Weeping Angel in her side and rear-view mirrors while the Doctor phases between Yaz’s partner and herself. In the next scene, Yaz, all dressed up in military uniform, is interviewing Vinder, who realizes that he’s reliving memories, but with Yaz in the role of his commanding officer. He’s being interviewed for the position of the Guardian of the Grand Serpent. The Doctor pops in as a hologram, explaining that she’s trying to navigate several timestreams at once.

Meanwhile, the Doctor, Yaz, Dan, and Vinder enter the Temple of Atropos to confront the Ravagers of Time. Back in the time storm, the Mouri inform the Doctor that the pressure of the Time Storm will inevitably overpower her. While inside the Temple, the Doctor threatens the Ravagers, who are revealed as Swarm and Azure, to stand down. She recovers the memories of her past Fugitive Doctor incarnation, during the reclamation of Atropos, which happened in the Doctor’s past. Then we see Dan, the real Dan, bump into Williamson, the displaced Victorian who foresaw this or a calamity coming, from the 1820s,  shooting a futuristic gun. 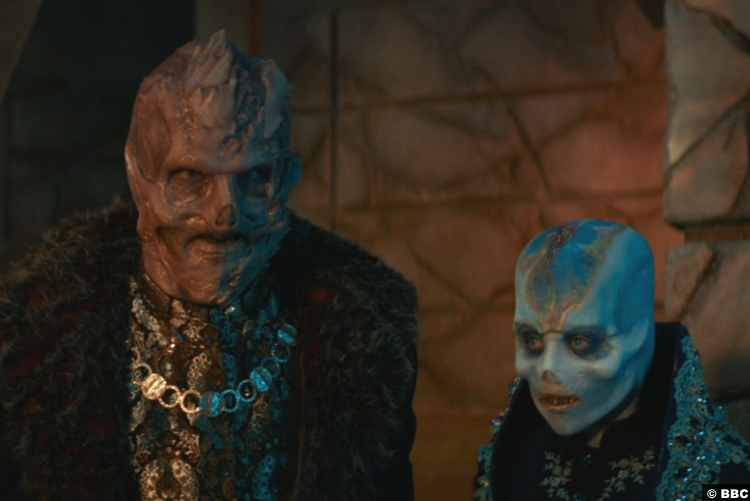 Bel, who managed to find the ship, arrives in the “Cyber Zone”, observing a march of an entire horde of Cybermen, a cyborg race who are among the most persistent enemies of the Doctor. She returns on her ship, continuing her journey. Vinder, on the other hand, meets with The Grand Serpent, who he’s supposed to guard, while Yaz plays video games with her sister, who morphs into the Doctor and back to herself.

The Doctor informs Yaz that she’s working with the Mouri to hide her, Dan, and Vinder in their respective memories, past, present, and future explaining that their best hiding spots are in their lives. Suddenly, a Weeping Angel appears in Yaz’s game, moving into the living room. But before it could displace her in Time, Yaz destroyed the video game console, getting rid of the Angel.

Back at the Temple of Atropos, the Doctor confronts Swarm and Azure in the past, informing them of their options: banishment or execution. Swarm informs the Doctor of the Passengers’ nature and tries to leverage them against the Doctor. However, the Doctor summoned the Mouri, who were locked in one of the Passengers, while Yaz, Vinder, and Dan, who is in the role of Karvanista, imprison Swarm and Azure in stasis fields. But in the Time Storm, the “present-day” Doctor implores the Mouri to repeat the same strategy as before and send four Mouri to the present to save their friends. 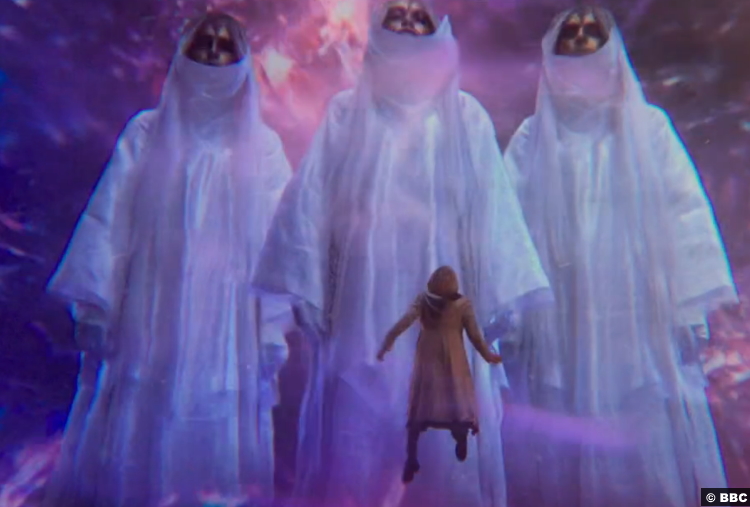 Bel leaves the Cyber Zone, and in the process, incapacitates a Cyberman for interrogation, revealing her mission is “love” right before killing the cyborg. Meanwhile, the Grand Serpent negotiates with his potential allies and poses certain conditions that require Vinder to stop recording the meeting. He then asks his new allies to assassinate someone. Vinder then recounts the situation with his superior officer, once again presented as Yaz, wanting to see the Grand Serpent accountable for his actions. Finally, he submits his report against the Grand Serpent, for which he got demoted to an outpost at the edge of space, where we first met him in “The Halloween Apocalypse.” He recorded a message to a special someone, stating that he would be at the outpost for a long time. 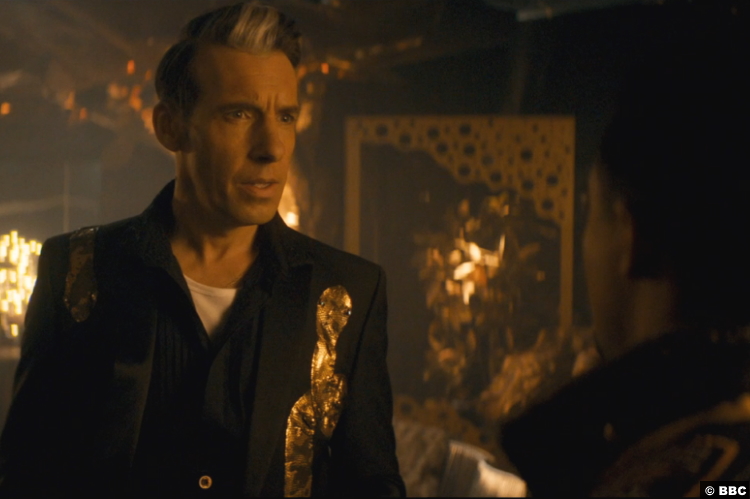 The Mouri in the Time Storm inform the Doctor that they sent four of their kind to the present, to save her friends. However, the Doc is pulled into another mysterious location and greeted by a mysterious woman (Awsok), who accuses the Doctor of meddling with too many timestreams, claiming that the Flux was purposefully created because of the Doctor’s actions. 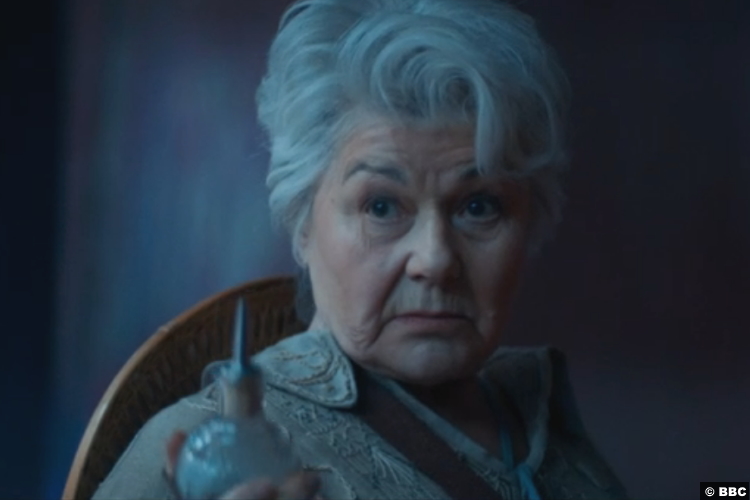 When the Doc returned to the present, we see Yaz, Dan, and Vinder are safe and the Mouri at their respective places within the Temple. Swarm and Azure reappear and reveal that they orchestrated everything that had transpired and that, as the Flux disrupts space, they disrupt Time. Right before vanishing, the formidable duo also reveals that Dan’s friend, Diane, is hidden in one of the Passengers. Probably the one Dan saw in his timestream.

Team TARDIS departs the Temple, transporting Vinder to his homeworld decimated by the Flux. The episode reveals that the message he sent from the outpost was meant for Bel, who we see throughout the episode, recording one in return. Back on the TARDIS, a Weeping Angel leaps out of Yaz’s phone, hijacks the TARDIS, and takes control of it. Cut. Roll Credits.

7/10 – “Once, Upon Time” is a cleverly thought-out episode that uses seemingly random events to disclose information about the characters while still pushing the narrative forward. Yaz’s scenes were the weakest by far, but she’s already a well-established character, considering that this is Mandip Gill’s third year as a companion. Dan’s scenes are a bit more revealing, while Vinder’s are most insightful and tie well with the entire episode’s narrative, which is based on what appear to be flashbacks. Even those that could potentially still play out in the Flux season. 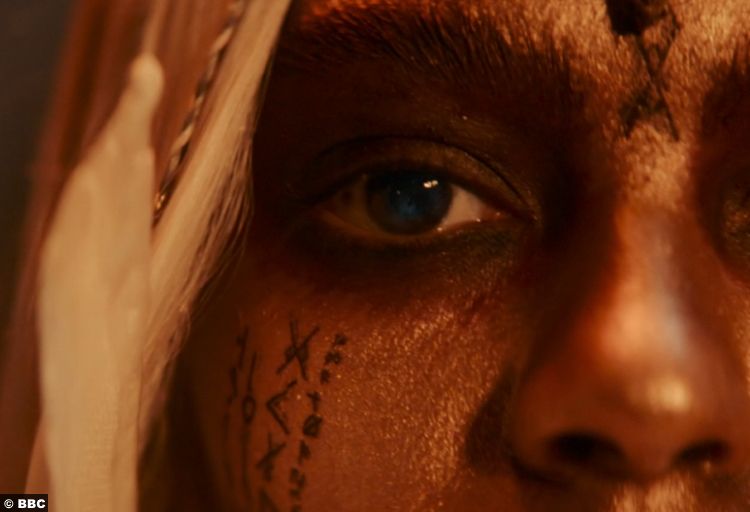