Season 13’s premiere episode of Doctor Who, titled “The Halloween Apocalypse,” left the fandom with a fantastic cliffhanger, with the Earth and TARDIS both being overwhelmed by the Flux – a mysterious entity that brings about the end of the universe. Well, episode two is here to untangle all the plot points laid out before the viewers, in a Chibnall-written episode called “War of Sontarans.”

The very first scene in “War of Sontarans” opens up where the premiere episode concluded, with the Flux impacting the TARDIS and leaving the fate of a Lupari-shielded Earth to speculation. However, after a brief but unsettling vision, experienced by the Thirteenth Doctor, which includes a group of severely twisted houses, the Doctor wakes up on what appears to be Earth although the “when” still remains a mystery. More or less.  Space and time didn’t cease to exist, the Earth is still there, and she and her two companions, Yaz and Dan, are still among the existing.

Everyone seems fine, though they apparently “landed” in the aftermath of a particularly bloody battle, soon to be greeted by Mary Seacole, a British-Jamaican nurse who set up the “British Hotel” behind the lines during the Crimean War in the 1850s. Mary, portrayed by Sara Powell, mistakes the trio for corpse-robbers, while her very presence and the magnitude of the battle clues the Doctor into their new when- and whereabouts – the Siege of Sevastopol in 1854-55, between the British and the Russians. Upon hearing the enemy’s march, the Doctor inquired from Mary about how many Russian troops the British were fighting, only to find out that they were not fighting the Russians at all. Instead, the British, led by the arrogant General Logan, are fighting the Sontarans. And the Sontaran commander even appears on a white horse. 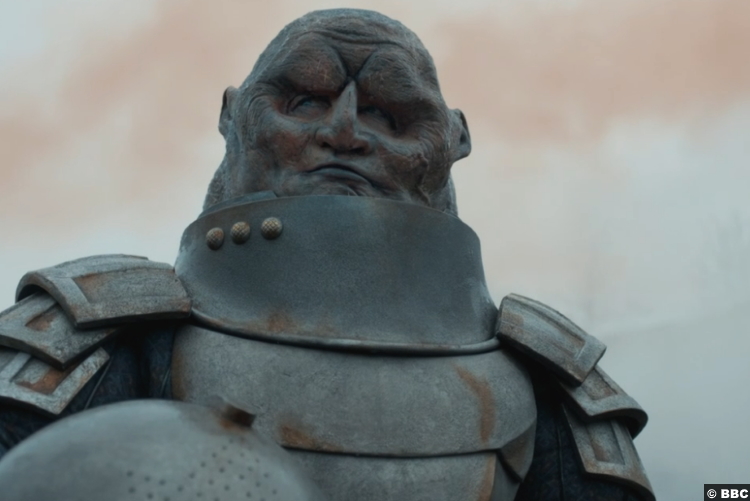 Though their potato-ness may seem odd to the show’s newcomers, die-hard fans of the series are very well acquainted with the Sontarans, a race of belligerent and militaristic clones, and some of the Doctor’s most infamous foes. Despite that fact, they were never depicted as a “season-wide” threat – they were always more of a “monster of the week” type. They do look more grotesque – as a scarred, malformed mass of flesh stuffed into a metal plate armor, clearly opposing the “angry potato in a plastic bag” look they had for themselves during past depictions.

Upon reaching the “hotel”, Dan starts to disappear, and so does Yaz, for no apparent reason except the “timey wimey-ness” that has already made itself commonplace in this season.  Perhaps it was the collision between the Flux and Vortex energy as posited by the Doctor. However, how she knew this remains a mystery to the viewership when just an episode ago she had no idea what the Flux even was. Regardless, this tiny plot twist transports our heroes where they’re needed the most but does absolutely nothing to explain how the trio found themselves in Crimea in the first place.

In the meantime, Vinder, who previously escaped his space outpost in the face of the Flux, wakes up in an alien temple, where he’s approached by a flying inverse-pyramid-shaped robot, demanding that he carries out repairs. Yaz also arrives at the temple soon enough, though she’s greeted by Joseph Williamson, the historical figure from the previous episode, who commissioned the tunneling beneath Liverpool. It’s worth noting that, just like Mary Seacole, Williamson was an actual historical figure. He was an eccentric English businessman and philanthropist, best known for the Williamson Tunnels construction in the Edge Hill area of Liverpool. This possibly implies that the tunnels he had built are somehow connected to the temple, though this isn’t confirmed in “War of Sontarans.”

After exchanging a few words with Mr. Williamson, Yaz was greeted by the second pyramid-shaped robot who took her to join Vinder in the repair effort. But the thing they’re supposed to repair is perhaps beyond the scope of their abilities – quantum-locked humanoids called the Mouri, whose job description reads something along the lines of Project Managers of Time. Apparently, two of these apparitions/time-locked beings have been damaged by the Flux passing through, and it’s up to Yaz and Vinder to fix them. 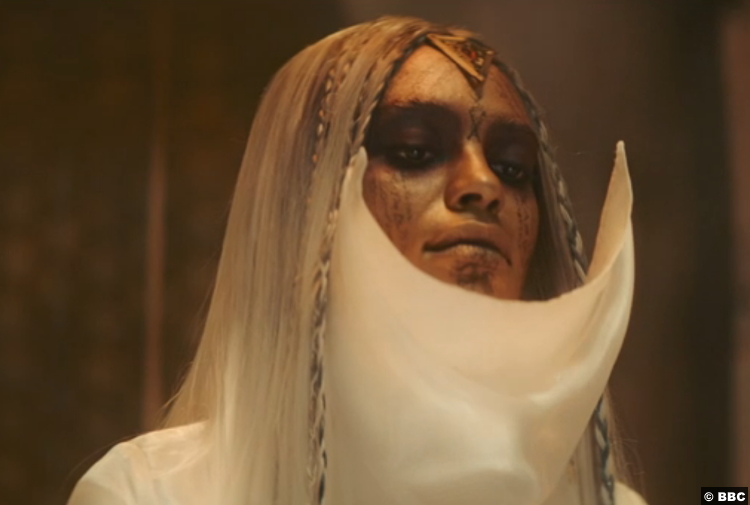 Dan, on the other hand, shows up in 21st century Liverpool, which is now under the direct control of the Sontarans, who are ruling the Earth with an iron fist. Through a series of events, Dan discovers the truth behind the Sontarans’ appearing at different points in history. The aliens managed to slip through the Lupari’s shield before it was complete, right before the Flux consumed it (as per the previous episode). They’re now occupying Liverpool and constructing a fleet of time-traveling ships to conquer the Earth at various points throughout its history, converting it into an outpost.

Through a series of events, both the Doctor and Dan find themselves aboard a Sontaran spaceship, allowing them to communicate through the ship’s systems, despite being 200 years apart. Sneaking aboard an enemy spaceship is a bit much for a new coming modern earth companion such as Dan, who barely even scratched the surface of what the Doctor is capable of, but yet again, Dan is under the protection of Karvanista – his very own humanoid canine, who followed him aboard the ship, to protect his “pet.” He and Karvanista then commandeer one of the ships and ram it into the shipyard, creating a temporal shockwave, which in turn creates an implosion, and erases Sontarans from Earth. At least at that timeline. It sounds like a boring conclusion to their adventure, to be honest. 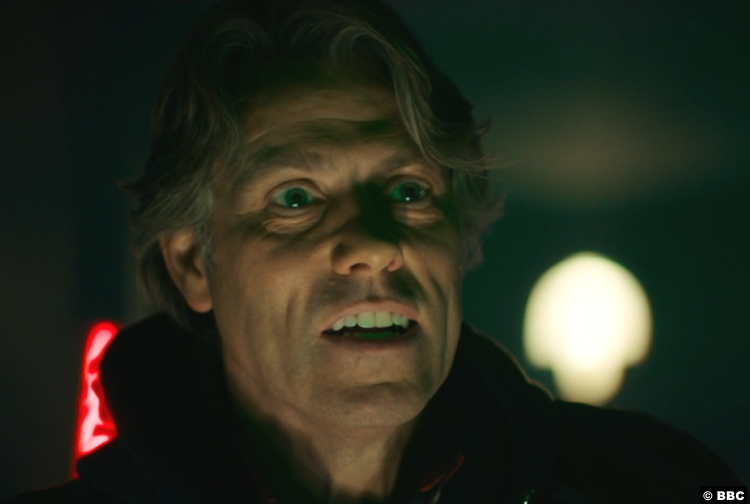 The Doctor’s side of the plan is also a bit “commonplace” in its own right, after learning from Mary that Sontarans enter a rest cycle every 27 hours, she concocts a plan along with the surviving troops to sabotage the process and force the Sontarans to either retreat or suffer defeat and suffocation on Earth. It would seem that those bulky suits aren’t just oversized potato bakers that serve as armor, but they also serve as a filtration system. It appears that Sontarans’ weakness, besides the probic vent on the back of their necks, is a weakness to Earth’s bacteria and microbes filling our planet’s atmosphere, ala War of the Worlds. Who knew? 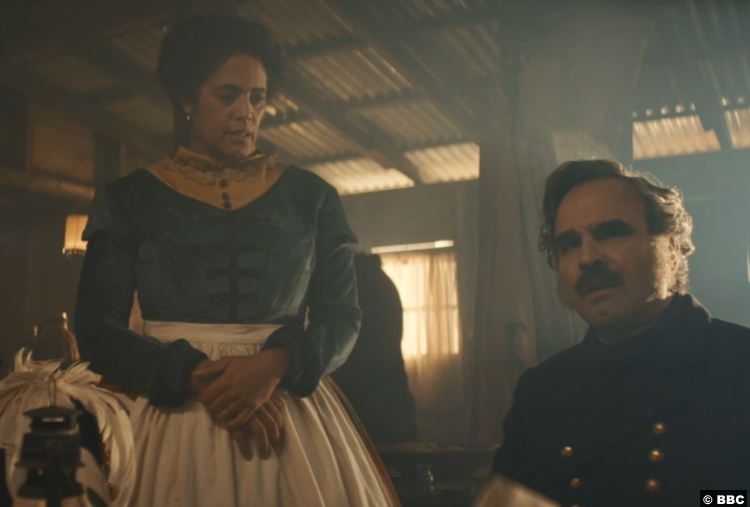 The warmongering aliens chose to “strategically withdraw,” but their withdrawal was cut short by General Logan, who planted enough explosives to demolish the entire Sontaran fleet. The Doctor, angry at Logan, retreats to the TARDIS and teleports to meet Dan in the 21st century. After reuniting with Dan, the Doctor assesses that something’s corrupting the TARDIS right before it entirely hijacks the Police Box and brings it to the Temple of Atropos – located on the planet Time.

This is presumably done by Swarm and his Sister Azure, with help from a new friend called the Passenger. The villainous trio appeared at the temple halfway through the episode and cruelly toyed a bit with  Yaz and Vinder (although Joseph Williamson, our time-displaced Victorian, is nowhere to be seen) before forcing them to take the places of previously damaged Mouri. The Swarm explained to the recently arrived Doctor that the temple was broken and that the Mouri were failing. Knowing that the power of unleashing time will kill Yaz, who is by no means equipped to handle such power, the Doctor begs Swarm not to activate the temple. But the episode ends with the snap of Swarm’s finger as he activates the Temple of Atropos. 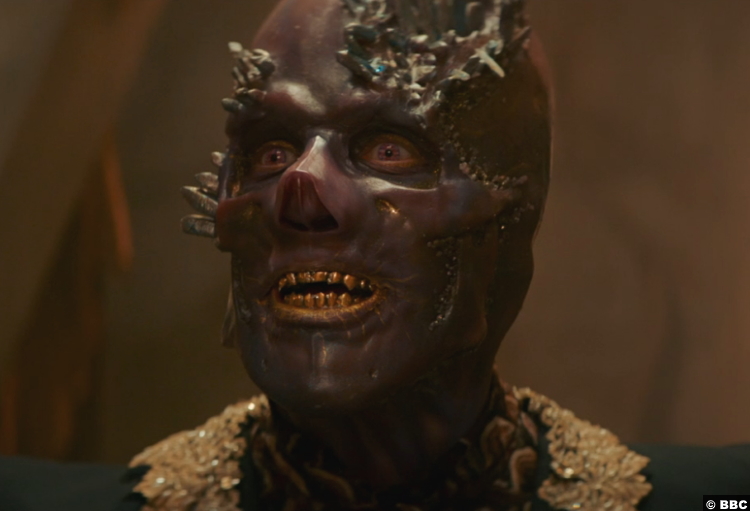 7/10 – “The War of Sontarans” untangles one of the knots tied by the original episode by tying another one elsewhere along the line. Placing Sontarans as the episode’s main antagonists is a clever nod to earlier Doctor Who narratives, though the conflict between the two falls a bit flat. As if the writing is trying to stall the underlying narrative instead of teasing the great crescendo of the Season’s finale. A bit bland, but 7 out of 10 for Whittaker’s performance and overall feel of the episode, which isn’t bombarding the viewership with overwhelming information the way “The Halloween Apocalypse” did. 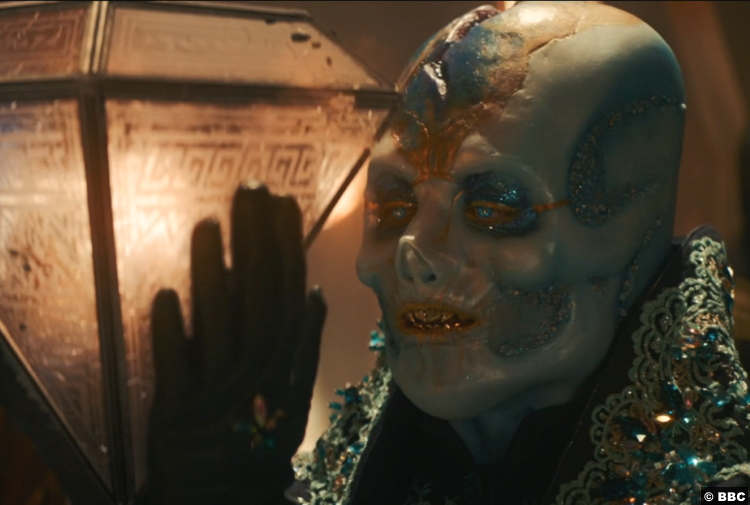