Many years ago, I flirted with John Barrowman at a Comicon in Portland, but that’s a story for another day.

We start with a scene of the Doctor and the Fam melting the heck out of a Dalek that is at GCHQ.

367 minutes later, the melted Dalek is going to be transferred to “Depository 23.”  Our hapless courier stops for a cuppa on the way and is summarily poisoned by the barista, who takes the Dalek…somewhere. 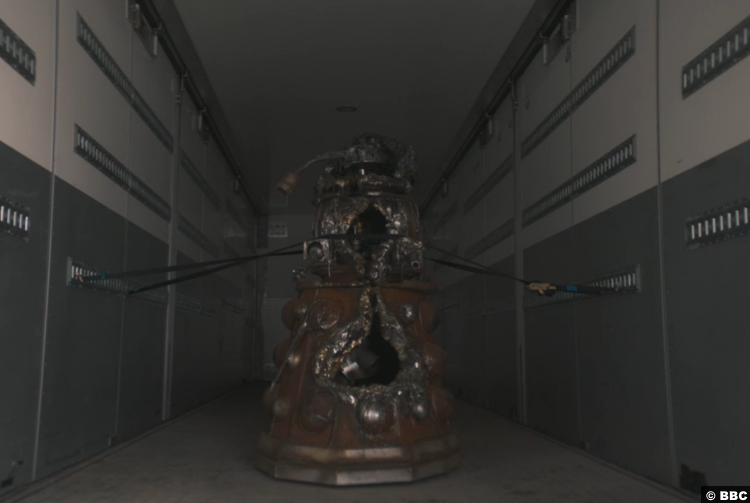 Really? He picked the one burger van on the way that had the poisoner working there?

Steven Moffat was known for creating plots that make no sense and making them seem plausible and emotionally affecting, but Chris Chibnall just seems to like going “and then THIS happens” without thinking too much beyond that.

Case in point: Later in the episode, a cloned Dalek takes control of Leo, our over-eager and very naïve scientist, and forces him to…somehow get to Osaka, Japan.  How did he get there?  Did he get on a plane? With a nasty Cthulian monster hugging him from the back? 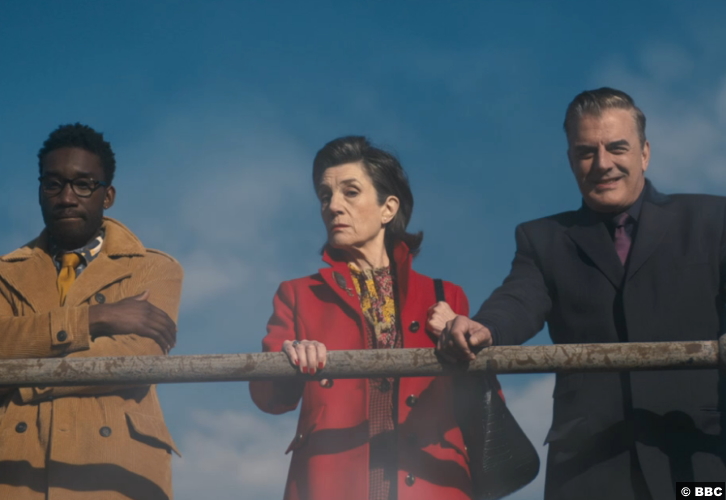 Back to the plot of the episode.  It’s a pretty standard plot: Government wants to deal with civil unrest; friendly megalomaniac proposes arming the government with advanced technology that nobody really understands; opportunistic politician eats it up with a spoon in an effort to become party leader and therefore PM, and…it all goes wrong.  That’s it, really.  Except that, because this is Doctor Who, the advanced tech is Dalek shells controlled by AI, and it all goes wrong because the eager young scientist in charge decides to say “hmm what’s all this organic matter coating the inside of the melted Dalek shell? I’d better clone it,” and…Davros is your uncle.  The cloned Dalek gets into the system, somehow convinces an unknown set of humans to build it a cloning facility in Osaka, and then liquifies said humans to be used for food.

Why Osaka?  I need to stop trying to pick apart this plot…

Oh, what about the Doctor?

She’s in Judoon jail, which looks pretty cool, actually – there are callbacks to the Weeping Angels, the Ood, the Silence, and even the Pting, the little dude that eats everything.  It’s clear the Doctor has been here for quite a while because the show uses the “marks on the prison wall” method of counting time. 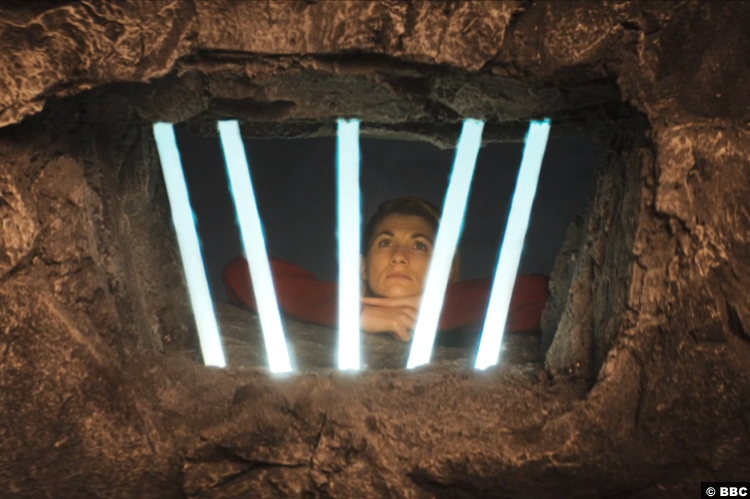 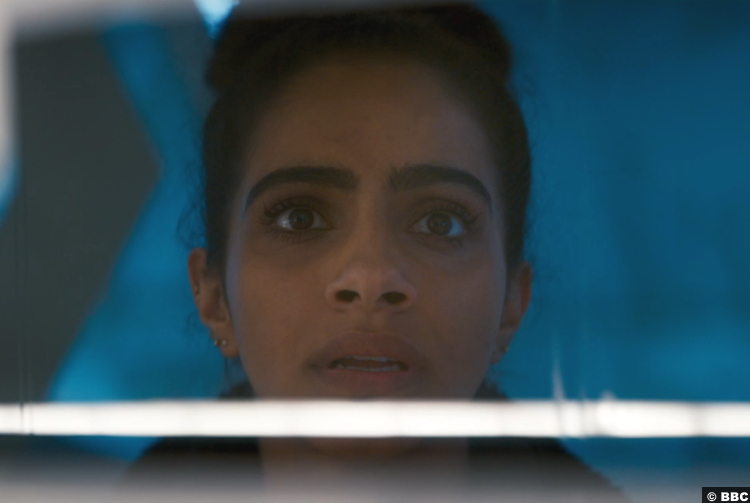 Back on Earth, the Fam, particularly Yaz, are trying to figure out where she went, and if they can find her, and how. They haven’t seen her in 10 months, and they’re debating getting back to their lives.  It’s a good scene between the three – there’s a tension between Yaz’s desperate search and Ryan just kind of being over it…until Graham finds footage of a Dalek.  The three go into Action Mode, and try to figure out how to save the day without the Doctor and her shiny toys.  Their first thought is to go yell at Mr. Big…sorry, Jack Robertson, the Trumpian megalomaniac we last saw in “Arachnids in the UK” (arachnophobe shudder), who is the genius behind the AI-controlled Dalek shells.  Well, the Fam yells at Robertson, and he has his security tell them to go away.  Nicely done.

But hey, the Doctor needs to escape.  Enter Captain Jack Harkness, who has…wibbly wobbly timey wimeyed himself into the jail, and has a magic ball that can help them escape, which they do.  The Doctor returns and there’s an awkward reunion with the Fam (including Jack flirting with Graham, which is adorable).  Apparently, the TARDIS has screwed up again and it’s 10 months since they’ve seen the Doctor instead of being right after they separated.  Silly TARDIS.  This is the first indication we get that the Fam, or at least some of them, might be thinking about saying goodbye to the Doctor, as there’s a definite tension here – especially with Ryan. 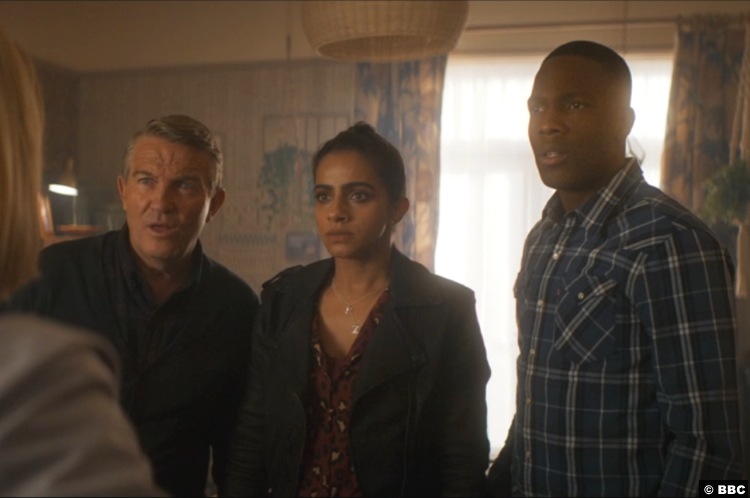 Meanwhile, Leo, our clever scientist, has cloned a Dalek squid, and well, that was stupid.  He shows it to Jack Robertson, who reacts in horror and tells Leo to incinerate the monster.  Leo tries to do that, but the Dalek squid is like nah, escapes, and takes control of Leo’s body.  Leo…gets to Osaka somehow…and sees the cloning facility that the squid has…somehow managed to have built. 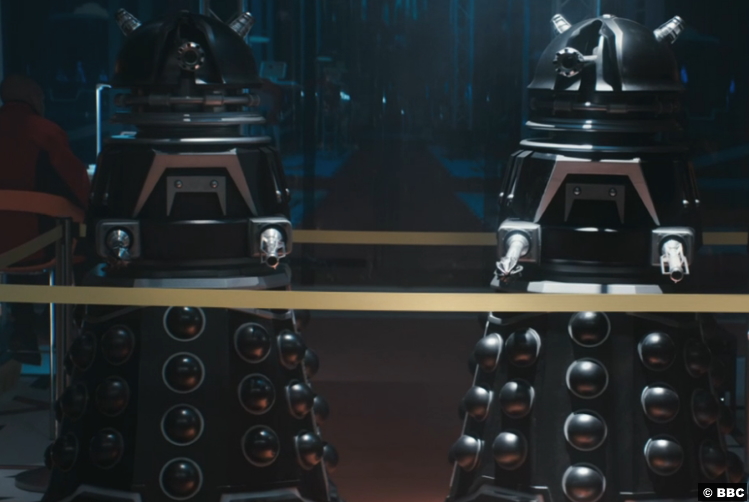 Cue the opportunistic politician, who is now Prime Minister, making a very scary speech about “security” that sounds very police state-y, and then unveiling her AI-controlled Dalek shells.  Surely, nothing could possibly go wrong.

Yaz and Captain Jack break into the Dalek cloning facility.  Jack expects Yaz to be impressed with the “square hole” gun he uses to make a square hole in a wall for them to get through.  Yaz’s reaction is classic and absolutely hilarious – taking Jack’s ego down a notch in a dry and witty comeback that just deflates him.  It’s fantastic.  The two of them get into the Dalek cloning facility and try to “blow ’em up, kid,” but one of them facehuggers itself onto Jack’s face, and another attacks Yaz.  Jack escapes his own Dalek and then uses his “square hole” gun to turn the other Dalek into a square hole.

The Doctor, Graham, and Ryan fly the TARDIS to Osaka, which takes just enough time for the Doctor and Ryan to have a heartfelt chat about how long she’s been gone, what she dealt with in prison, and what it all means – especially in light of the major revelations about the Doctor’s origins, the hidden “other Doctors” that she learned about, and the whole mystery of who the Doctor actually is.  Ryan’s insights here are good – she has to deal with her past, mesh it with her present and figure out what it all means.

The TARDIS arrives in Osaka, with Jack Robertson just completely unable to even.  Cue the original Dalek clone attached to Leo, who Bond villains his whole absurdly implausible plan to the Doctor and then murders Leo. 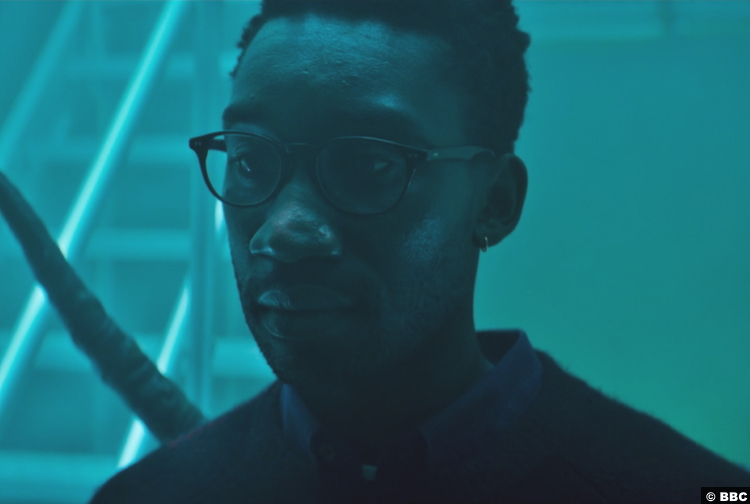 Then, something happens to the light in the room – it turns purple, which…is bad, because ultraviolet light allows the Dalek squids in the cloning facility to um…teleport into the Dalek AI shells and become real Daleks.  Sure.

Ok, so now we have our climactic conflict.  The AI Daleks are now just Daleks, and they start exterminating people, including the hapless Prime Minister.  The Earth is lost.

Except that, of course, the Doctor has a brilliant half of a plan.  She’s going to call in some other Daleks (let’s call them “Space Daleks”) whose commitment to “purity” will mean that they have to murder the Cloned Daleks.  And then…profit?

This is where I think the difference between Chibnall’s slapdash plotting and Moffat’s emotionally potent gibberish is clearest. Chibnall’s solution to this problem is that the Doctor’s plot works beautifully – the Space Daleks kill all of the Cloned Daleks, despite Jack Robertson’s craven capitulation to them, and…all is well.  The Fam and Jack Harkness blow up the Space Daleks’ ship, and the Doctor lures the Space Daleks into another TARDIS that she then implodes (but not before a hologram of the Doctor explains to the Space Daleks exactly what she’s doing for some reason).  Bing bang boom, done.  Yawn, kind of.  Maybe a Moffat plot wouldn’t have made more sense, but I think I would have cared about it more. 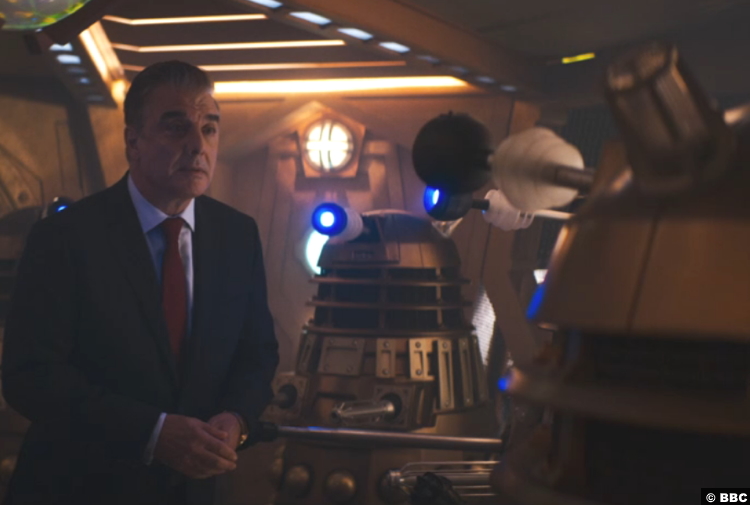 The end of the episode is about catharsis and resolution.  Will the Fam continue to follow the Doctor?  Nope.  Ryan needs to tend to his own stuff, and Graham needs to tend to Ryan.  Yaz is the only one who’s gung ho to keep traveling with the Doctor, so there’s a tearful goodbye and the Fam is no more.  This scene works because it pays off a lot of stuff that has been building with the characters all along, and it makes perfect sense that Ryan and Graham need to move on. 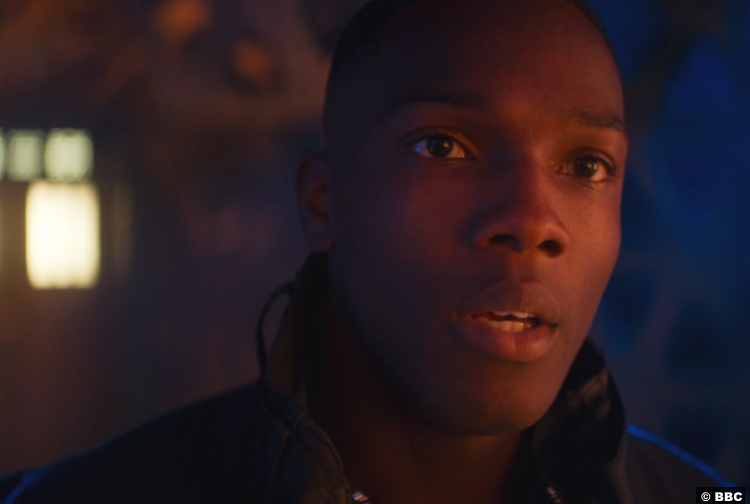 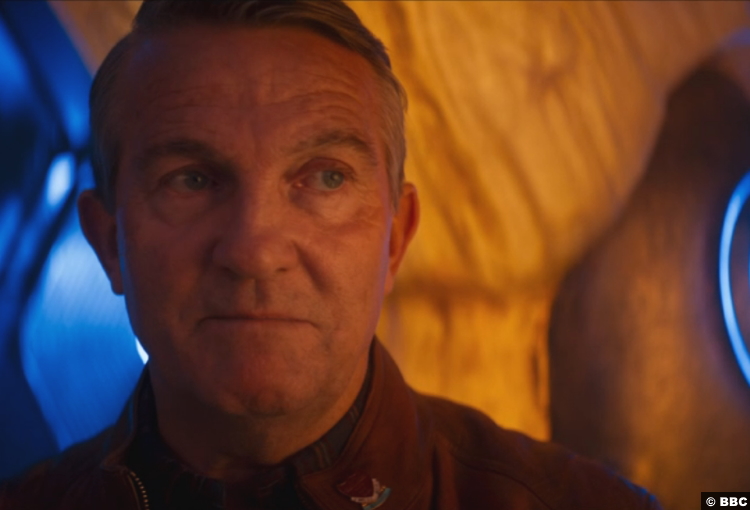 There’s a weird off-camera conversation between the Doctor and Jack Harkness whose only purpose is to explain that Jack is leaving.  It’s very odd, and I think it’s a post-hoc edit shoehorned into the episode.

And in the end, Jack Robertson is hailed as a “hero” who saved the Earth from the Daleks.  What?

6/10 –  It’s a fun Doctor Who episode that isn’t nearly as good as it should be given how long it’s been since we had new Doctor Who.  Jodie Whittaker is radiant as usual, and the Fam are too, and any episode with Captain Jack in it makes me grin in ways that aren’t entirely appropriate.