Last time on SO OF COURSE, it was OCTOBER!

Yes, the WWE decided to shake up their PPV calendar by bumping Hell in a Cell up a few months to the summer. Things are back to normal now and with only a month to go before SummerSlam the company has one last big show to host. You’re not going to want to miss this, and I don’t mean because it’s sure to be a good show; I mean because it’s on Peacock so if you miss it, good luck trying to navigate that horrid menu system without a Rosetta Stone handy to try and replay it.

Also yeah, it might just be a good show. It’s hard for this one to suck, but man is WWE ever good about surprising me by sucking at things they should be good at. Let’s get down to it, yeah? THIS is your SO OF COURSE preview of WWE MONEY IN THE POCKETS OF AEW AFTER MALAKI BLACK BECOMES EVERYTHING HE COULD HAVE BEEN IN WWE, MY GOSH VINCE WHAT ARE YOU EVEN DOING? 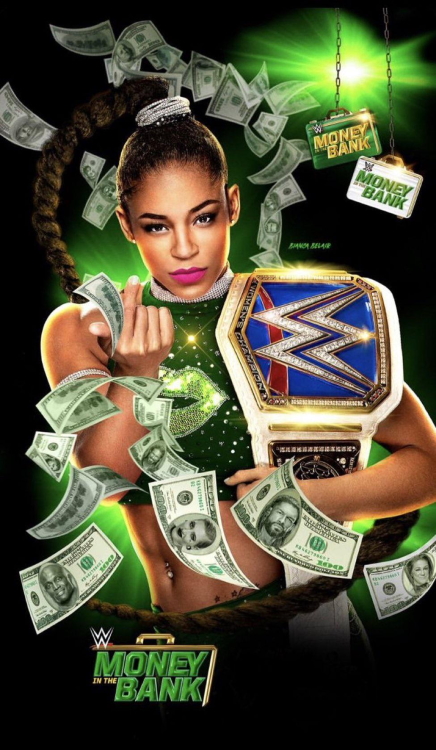 What it be? It be a transitional opportunity to move AJ Styles toward some real competition for SummerSlam. I mean, come on, does anyone think, at will be the biggest SummerSlam in years, that AJ Styles will be wrestling the show as Tag Champ? I suppose it’s possible that Vince cares so little about the tag titles that he could simply keep the belt on AJ and just have him work a singles match anyway, but I think the easier play is for the Raiders to win and transition the title to someone else.

Do I care? Omos is fun to look at, but not watch, if that makes sense. Styles is still Styles, but he’s alone out there. This one gets a no from me.

Who should win? I pretty much made my case for what should happen, so I’ll just add that, were I booking it, I would get the belts off the champs, create some friction between Omos and Styles, that continues through SummerSlam, when Styles takes on…I dunno, some big singles star not doing anything, ultimately exploding in a break-up at Survivor Series, setting up a series of run-ins between November and the Rumble, then an elimination in the Rumble sets up a match vs Omos at Mania. But that’s an old-school WWF, long-term, slow-burn booking idea, so I have no expectations of that happening. Instead, I’m sure the team will explode here and have their match at SummerSlam.

What it be? It be a ladder match with a solid but not electrifying assembly of ladies, with one name still TBA as of this writing. I see the potential for some sick spots if they go all out, but other than Naomi, there’s not a name on the list of competitors (Asuka, Alexa Bliss, Nikki Ash, Live Morgan, Zelina Vega, Natalya) that intrigues me as a briefcase holder.

Do I care? Will Sasha Banks be the 8th competitor? If so, then my interest skyrockets. Her holding the case for a few months would be delightful. If Banks returns my answer is a hard yes. If not, it’s an apathetic shrug.

Who should win? Will Sasha Banks be the 8th competitor? If not, then Naomi needs another run in the sun. It’s slim pickings after that.

What it be? *deep breath*

Who should win? *gestures vaguely to the meme below…

What it be? It be about two years too late, if you ask me. Kofi has cooled off and there’s not an inch of hope in me that says he’s winning. This match should be a bigger deal than it is, and would be had the company not dropped the ball with Kingston after he carried the title for months a couple of years back.

Do I care? Bobby is strong enough to throw Kofi around, and Kofi is talented enough to look good either taking or giving offense. The match should be serviceable assuming Lashley can keep pace with the quicker challenger. I’ll give this one a “sure.”

Who should win? Bobby, but only because Kofi has been so mismanaged it would be a waste to just take the title off a well-established champ and put it on someone that hasn’t been built up. Then again, Jinder Mahal held the belt for months on end, so what do I know…

What it be? It be a ladder match with a bunch of spot-monkeys (an old wrestling term I’m less comfortable using every passing year), so it’ll be a lot of car crash action and hopefully some good near-finishes, leading to a surprising, but exciting finish.

Do I care? It’s pretty hard to do this wrong, and usually, the only complaints come from the winner, so everything up until the final thirty seconds should be great. It’s a yes.

Who should win? As has been the case for a few years now, the group of guys competing basically boils down to three camps; there are the guys with no shot of winning (Ricochet, John Morrison). There are the guys who, based on booking history, are easily believable but overall boring winners (Nakamura, Seth Rollins, Drew McIntryre), and there are the guys who, by winning, would signal a potential new main-eventer is ready to emerge (Riddle, Big E). Of those, I would be most excited to see Riddle win because it would be the most fun, but I think Big E would be the biggest “this is the future” move they could make. I would give it to E and see what he can do by announcing a cash-in vs Lashley @ SummerSlam.

What it be? It be another victory for Reigns and one step closer to a potential match vs Cena at SummerSlam.

Do I care? It’s always nice to see Edge, but my interest in this is fairly low due to it feeling like a placeholder. I’m more excited to see how everything shakes out with Roman next month, where we could see a match vs Cena, some post-match stuff with Lesnar, etc. Right now we’re in a holding pattern, so put me down as a “nah,” despite the match probably ending up very good.

Who should win? The question doesn’t need answering.