Last time on SO OF COURSE, it was THE GREAT RESET!

Backlash has come and gone and in the meantime, there have been a ton of shocking releases because the billion-dollar company that somehow continues to sucker people into giving them more and more cash is apparently in the midst of a “cost-cutting” period, despite somehow being able to sell out half a football stadium for SummerSlam without a single match yet announced and with only the hopes of the fans that the show won’t be a crippling disappointment, despite that almost always being the case.

And now with Halloween falling on a Sunday this year, fans are eagerly hoping for the return of Halloween Havoc (you’ll get Great Balls of Fire 2 and like it!). A hint that it might be coming is the PPV this Sunday, as WWE has bumped up their regular October show to June.

With that out of the way, let’s get into it. THIS is your SO OF COURSE preview of WWE HELL IN A HANDBASKET VINCE CAN YOU PLEASE JUST TAKE AN AMBIEN AND STOP HELTER SKELTERING YOUR BOOKING FOR A CHANGE I MEAN MY GOSH! 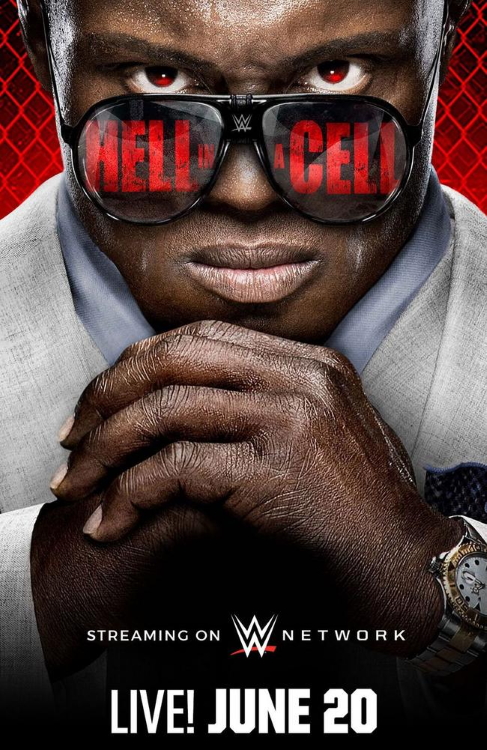 What it is? It’s the kind of match I really love and the kind of match that is tailor-made for a cage match of some sort. So of course (!) it’s just a regular match. Still, I love matches where the tiny heel plays a nagging nuisance to a monster, and then, when they finally meet, the monster gets his (or her in this case) payback. Remember Kane vs X-Pac in a cage match at Armageddon 1999? No? I remember it. Holy crap that was over twenty-one years ago. What am I even doing with my life? Anyway, it’s like that, but with far less fan engagement.

Who should win? Shayna because there’s no good reason for Alexa not to get squashed like a bug other than this being WWE and the fact that the next words I type will be…

What it is? It’s the only match I care about on this show full of reruns.

Who should win? These two have dynamite chemistry so I look forward to the second match in their feud. Their first one last month was solid but this one needs to end much like that one did, with the champ retaining and continuing to solidify herself as the next (current) big thing in the division.

What it is? It’s…painfully obvious that Roman Reigns needs fresh challengers. Smackdown is really hurting for talent. If only the company hadn’t just fired half the roster.

Who should win? I’m not even going to respond to this. I mean half the feud isn’t even about the challenger but about the ongoing Reigns family drama. And that’s fine and all, but when the title matches are taking a backseat to the drama, that’s a sign that something’s not working. Remember when the Austin title run was built around Austin vs McMahon (again, you probably don’t; it was nearly a quarter-century ago)? That’s an example of having strong title matches woven throughout the drama (Austin vs Undertaker, Austin vs Dude Love, Austin vs Rock, etc). Reigns needs better players around him or his title run is going to sputter right when it should be peaking.

What it is? It’s the Charlotte Flair show. Look I don’t want to make a thing of this but look at the Wikipedia article summarizing the match and count how many times Flair is referenced vs. Ripley…

At WrestleMania Backlash, Rhea Ripley defeated Charlotte Flair and Asuka to retain the Raw Women’s Championship. The following night on Raw, Flair confronted WWE officials Adam Pearce and Sonya Deville, demanding another opportunity at Ripley for the championship as Flair did not take the pin in the triple threat match. Pearce and Deville stated that if Flair won her match against Asuka, they would consider it. However, Flair lost the match thanks to a distraction from Ripley. The following week, however, Flair defeated Asuka. A match between Ripley and Flair for the title was then scheduled for Hell in a Cell.

You’d think Flair was the champ and Rhea was the one-off feud, but no; she’s booked like John Cena who, even when he didn’t have the title, still had the focus of the storyline. He had the “being John Cena” championship, just as Charlotte has the “being Charlotte Flair” championship, despite not really doing anything to justify so much booking protection.

Who should win? Rhea for all the same reasons Bianca should win her match.

What it is? It’s this match. Again. At least WWE has the self-awareness to call it a “last chance” match, even though no one really believes them.

Who should win? I’ve been flipping coins for three months now when it comes to this match. I can make as many arguments for McIntyre to reclaim the title as I can for Lashley to retain it. My heart says Drew earned the right last year to be the champ in front of crowds, but my head says Bobby Lashley vs Brock Lesnar is on deck for SummerSlam, so Bobby should retain and keep the momentum going.