Your SO OF COURSE preview of WWE WRESTLEMANIA 2021!

Last time on SO OF COURSE, it was…WWE Fastlane 2021

The one no one cares about because it’s “the one before Mania.”

Now it’s here. The big one. The show of shows. The granddaddy. The showcase of the immortals. A show so big it’s become a two-night affair for the second year in a row. THIS is your SO OF COURSE preview of WWE WRESTLE-ING ONLY ON THE NBC (PEA)COCK NETWORK,  NOW AVAILABLE WITHOUT ALL THE FUSSY, TROUBLESOME FEATURES OF THE OLD WWE NETWORK, LIKE PAUSING AND REWINDING 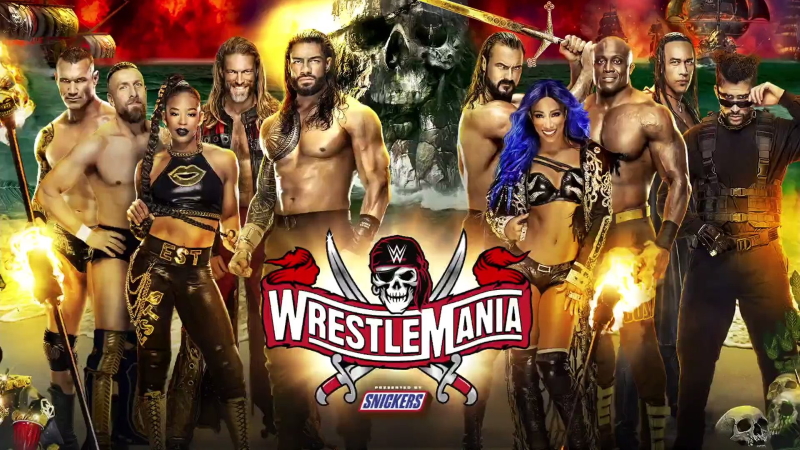 It’s a loaded card so let’s get right to it, and keep it snappy, shall we? 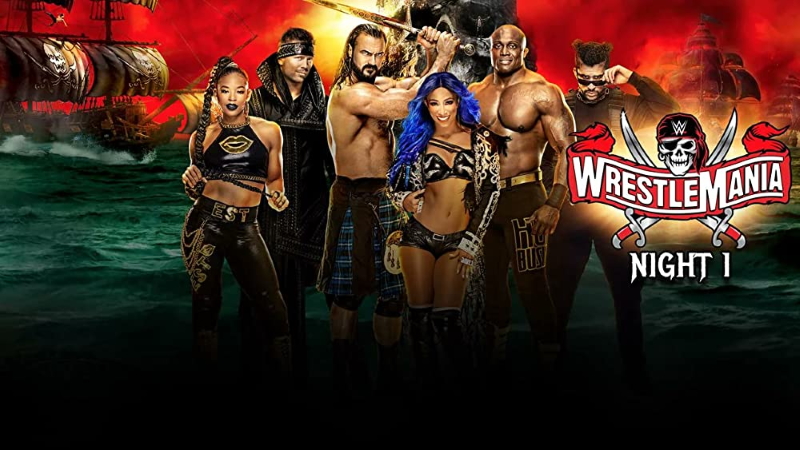 THE NEW DAY vs AJ STYLES/OMOS

What it is: The most popular tag team of the past decade, one of the most gifted sports entertainers of his generation, and…Omos.

Interest Level out of 14: #8 as it’ll probably be fun enough but ultimately forgettable. I’ve got it pegged as the curtain jerker because who better to start (or close) a WrestleMania than New Day? Other than that, and seeing AJ’s hair swaying in the wind, there’s not much that excites me here.

Who should win? AJ needs the win more, if only to keep his status-level as a contender high, and New Day are basically untaintable so they can absorb the loss with ease.

Interest Level out of 14: #3 despite there being no stakes on the line. This is just going to be about two excellent wrestlers going at it on the big stage. This is Jericho vs Benoit. Angle vs Michaels. If this is given more than 12 minutes, we’ll be talking about this one for years to come.

Who should win? In matches like this, I always prefer to see the babyface go over. Rollins’ status as a top guy is tenuous at best, but I think he can absorb a loss here better than Cesaro, whose placement on the card is even shakier. A win here could propel him to a “Daniel Bryan, Spring 2012″-esque run.

What it is: It’s WrestleMania’s annual celebrity feature, this time featuring a singer-songwriter. Miz was WWE champion a month ago, did you know that? Don’t worry, no one else remembers, either.

Interest Level out of 14: #11 because what’s there to be interested in? These matches are as formulaic as they can be with the ending as foregone as anything on the show.

Who should win? Who cares? But if you want a prediction: Bad Bunny does some kind of a top-rope maneuver and defeats The Miz, erstwhile WWE Champion.

What it is: An excuse for Shane to fall off of something very tall…probably the Tampa Bay Bucs’ pirate ship.

Interest Level out of 14: #9 and not lower only because Shane falling off the pirate ship will be bananas.

Who should win? Braun, because how do you let Shane win a match after falling off a pirate ship?

What it is: It’s the WWE Title Match, featuring a pair of guys you never would have dreamed would be in a WWE Title Match at WrestleMania just five years ago.

Interest Level out of 14: #6 as it promises some hard-hitting action. I can’t rate it any higher than that, though, as I remain unenthused about Lashley’s in-ring style, and Drew’s cooled off a bit over the past couple of months, too.

Who should win? This is a really hard one, honestly. I think I’d like to see Bobby Lashley hold on to it because the potential feuds he might have this summer interest me more with him carrying the strap than Drew, though if Drew were to win the title back I wouldn’t complain; he has done great helping to carry the show during the pandemic era.

What it is: Hopefully, it’s the main event of night one. These ladies deserve such a spotlight.

Interest Level out of 14: #2 and I’m tempted to put it at the top. Assuming Belair wins the title, that’ll be the moment of the event (other than Shane falling off a pirate ship).

Who should win? Belair. She’s the Rumble winner. Sasha has had a lengthy (for her) run with the title. She’s the vet now and this is a great torch-passing opportunity. Don’t overthink this one. 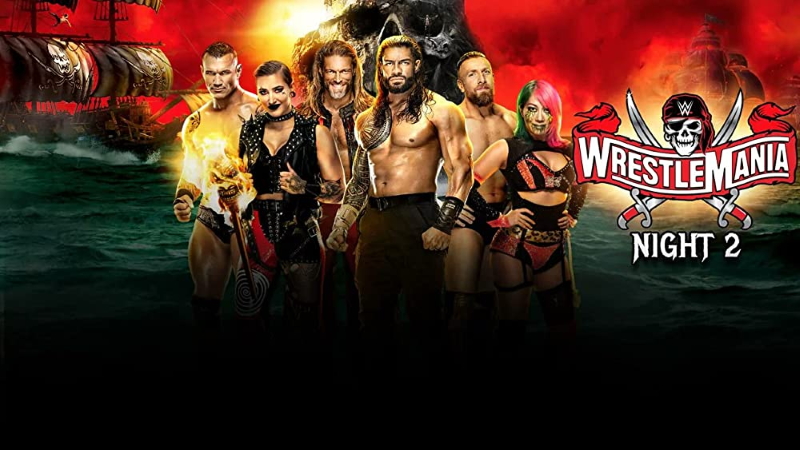 What it is: It’s a clash of styles that probably won’t be nearly as entertaining as it would have been if Riddle was facing, say, 2012-era Sheamus.

Interest Level out of 14: #12 I’m sorry to say. Sheamus today is just too worn out to do more than some basic brawling moves. Riddle can wrestle circles around him, but due to the nature of the competition, I suspect he’ll mostly be selling throughout the match, at least until the end.

Who should win? Riddle, and it should be treated as a signature win over a multi-time champion. Sheamus is low-key one of the most decorated superstars of the past decade and if the company was better-run, with talent that wasn’t overexposed and TV shows that weren’t multi-hour slogs, multiple times every week, this match could be akin to Bret Hart vs Roddy Piper at Mania 8. Instead, it’ll be forgotten by the end of the night, doing nothing for either man.

What it is: It’s a desperate attempt to keep the women’s tag division relevant despite there being a scarcity of interesting teams.

Interest Level out of 14: #13 with the (uncommented on) play-in match on night one scoring the #14 spot, as the only thing worse than a match featuring Nia Jax is one featuring Tamina Snuka.

Who should win? Assuming Tamina Snuka isn’t competing then anyone not named Nia Jax.

What it is: It’s a “Nigeran Drum Fight” which I’m sure won’t be super cringy, awkward and low-key racist, depending on if Lawler does a guest spot on commentary. Don’t put it past Vince to put Lawler on commentary just so he can say corny and mildly offensive jokes during this one.

Interest Level out of 14: #7 – Right in the middle because, though the gimmick intrigues me none at all, the athleticism and strength of these two men is more than enough to get me interested in their match. This will be Big E’s biggest match at WrestleMania as a solo performer, which isn’t saying much at all since his last solo outing saw him be eliminated in the Andre Battle Royal by Fandango.

Who should win? Big E as, between the two of them, he’s most ready for a spring-time main-event push.

What it is: Two frienemies, destined to do this forever, clashing one on one on the biggest stage.

Interest Level out of 14: #4 – More for the history than the actual build-up to this particular fight. It’s hard for me to separate the long history of this feud, spanning multiple promotions, from the actual WWE storyline that is being played out here. Actually, I think I’d prefer just to pretend this is a big indie-wrestling exhibition match and that none of the WWE nonsense is in any way involved here.

THE FIEND vs RANDY ORTON

What it is: This again.

Interest Level out of 14: #10 because we’ve already seen this so many times, I can’t even “fake it till you make it” my way into caring. I don’t think I’ve cared about a Bray Wyatt WrestleMania match (not counting last year’s masterful cinematic thing with Cena) since the Undertaker fight at Mania 31.

Who should win? I will always say The Fiend because it’s an easy layup to the “so of course” joke. We all know he’s destined to lose big matches forever.

What it is: A killer women’s match and no Charlotte Flair to speak of.

Interest Level out of 14: #5 but only because of the match, not what I expect to be a jumbled mess of a finish. These two have great chemistry and could, if given time, tear the house down. I worry about it being overbooked, however.

Who should win? Rhea and it pains me to say that as a fan of Asuka, but Rhea is the future and she needs this big statement win.

What it is: It’s the main event of night two, with three of the most important (in various ways) superstars of the past fifteen years.

Interest Level out of 14: #1 as it’s hard to top a triple-threat WrestleMania main event. They don’t happen often but when they do there are usually fireworks.

Who should win? Well let’s see: Edge has the advantage of being the Rumble winner and the big returning superstar. Daniel Bryan is the ultimate underdog at the tail-end of his career. I can’t tell you what a treat it is for him to get another Mania main-event under his belt. Roman Reigns has been the renaissance man ever since his big heel turn. All three have legit arguments for why they should come out the champ. Reigns is the champ, and a heel at that; Mania’s not usually the show for the villain to retain the title. So the question becomes which is more “feel good” — Edge winning or Daniel Bryan? I think Edge gets the nod, justifying his return and giving him a nice little run (a couple of months) as he prepares to leave under better circumstances than his forced retirement a decade ago.

Here’s to the weekend!