The Falcon and the Winter Soldier S01E02-04 Review: A strong second act

It’s been a few weeks since the last review but rest assured, I’ve been watching and following closely all the happenings on Falcon and the Winter Soldier. I had a sense even before the first episode aired that it would much more serialized than WandaVision, and with only six episodes, I figured three articles would be sufficient, one introducing the show, one reviewing the middle, and one for the conclusion. After watching episodes two through four, and with only two left to go, I have thoughts about the show so far.

In the last review, I said this…

Who is worthy to be the next Captain America? Bucky doesn’t think he is because he’s racked by guilt. Sam doesn’t think he is because he feels inadequate to stand in Steve’s shadow (the government’s disrespect of him only feeds those feelings, as well). We don’t yet know about John Walker. He’s the kind of character that is either going to be a raging b-hole or someone we expect to be a raging b-hole who is, in fact, a nice guy forced into an awkward situation. Time will tell.

Now that we’ve gone through the second act of the show’s three-act structure, I think we can definitively say, not only is John Walker a raging b-hole, but one of the most effectively written b-holes I’ve had the pleasure of TV-hating in quite some time. 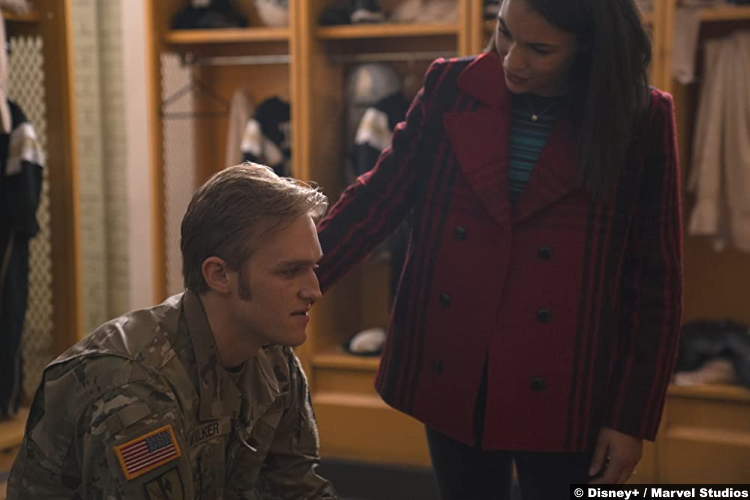 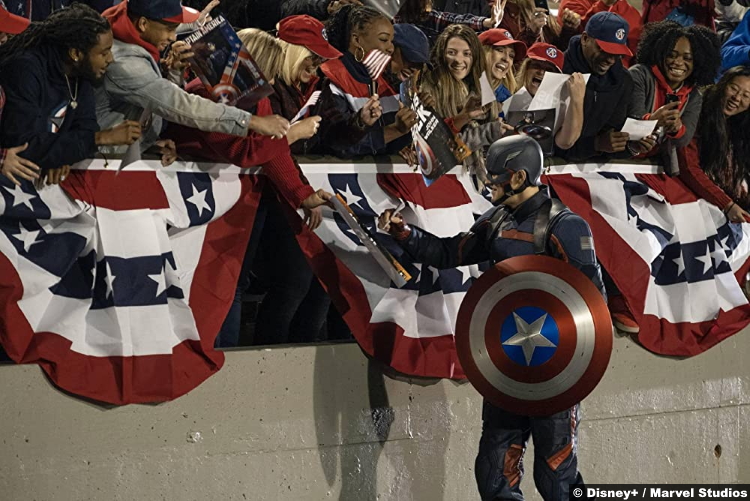 In episode two we are given our first proper introduction to the “new Captain America” and right off the bat, I hate everything about it (without yet having a reason to hate the man in uniform). It’s such a classic corporate America move to take something that became what it did organically (not to mention with a man, Steve Rogers, who is flat out unduplicable) and try to manufacture a second iteration. We see this all the time in Hollywood and it never ever works. You can’t “make” something go viral.

Fans don’t like being pandered to, patronized, or force-fed something they don’t want. So it’s quite the meta-commentary to see John Walker’s Captain America, a hero that is, on the surface, the MCU/Disney’s replacement for Chris Evans’ Captain America, but under the surface is obviously, knowingly, a guy being force-fed to the viewers as a replacement for a hero we took ten years to love and aren’t ready to just swap out for a younger model.

In the universe of the show, the response from the people who knew Steve Rogers is equally as frustrated, and the more they try to shove the new guy down our throats the more they show all the ways John Walker isn’t Steve Rogers. Leave it to corporate America and the US Government to completely fail to grasp what made Steve so special, thinking all they needed is a guy with an “All-American service record, who punches stuff and salutes a lot.” He’s like Hodges (the big goober that General Tommy Lee Jones wanted to get the serum in the first Cap movie).

The most telling line is when Bucky asked if John ever jumped on a live grenade and he quickly answers yes, bragging about the durability of modern helmets. That’s all well and good, but when Steve Rogers jumped on a grenade (that he thought was live) he was ninety-seven pounds and didn’t have a fancy helmet…

The new Cap looks the part but he lacks the heart. Steve Rogers was worthy to lift Mjölnir for crying out loud, and he didn’t get that from a magic vial.

John Walker’s not filling those shoes.

Episode three is all about muddying the waters with self-justified compromises in morality.

We naturally side with and root for Bucky and Sam, so we make excuses when they break Zemo out of prison. Sure, it was mostly Bucky who helped in that regard, but Sam barely did more than frown at it. Nevertheless, Zemo is a mass murderer, responsible for the death of the King of Wakanda, among many others, and almost single-handedly broke the Avengers in half. He’s a bad, bad dude…

But he dances and wears a flashy coat so it’s cool? I guess?

Meanwhile, there’s Sharon Carter, last seen in Civil War, and while everyone else who was on the “legal” wrong side in that conflict got a pardon, it seems Sharon either turned it down or was completely left out of the charity. As a result, she’s done what she’s had to in order to survive, even if that means compromising the morals she once espoused. 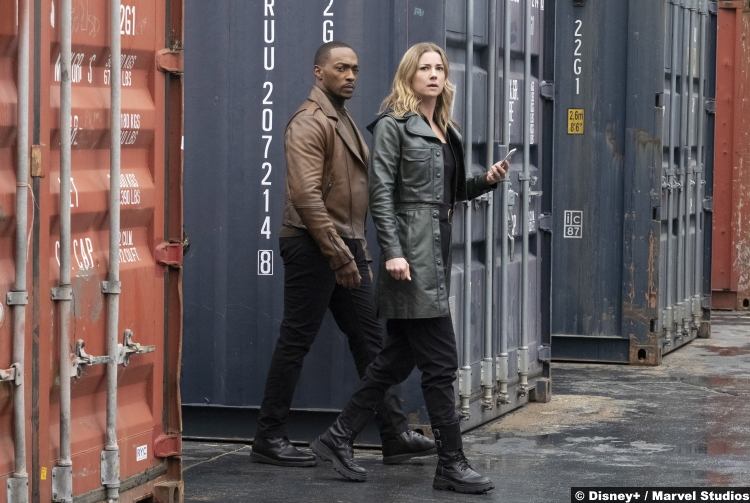 In the years since Civil War Sharon has made a life for herself in Madripoor, slinging fine art and talking in bitter tones about the injustices of the world. If you didn’t know her you’d think she was “villain monologuing.” Even after knowing her, I feel like she was “villain monologuing.” I’m not saying she is the infamous Power Broker, but she very well might be working with him/her. I’ve watched enough TV to know when a character gets on the phone and says to an unseen other person “we have a problem” that character is not a hero.

I would say each episode of the show thus far—despite how serialized it’s been—has had a strong theme to define it. Episode one is about legacy (which Sam and Bucky both struggle with, regarding Steve and filling his shoes). Episode two is about identity (with John Walker struggling to mark his own path as the new Cap, while Sam learns about Isaiah Bradley). Episode three is about compromise (the heroes break Zemo out; Sharon is working in a world of grey in Madripoor).

Episode four is all about temptation. I can’t be the only one who thought of The Lion, The Witch, and the Wardrobe as Zemo offered the children Turkish Delight. 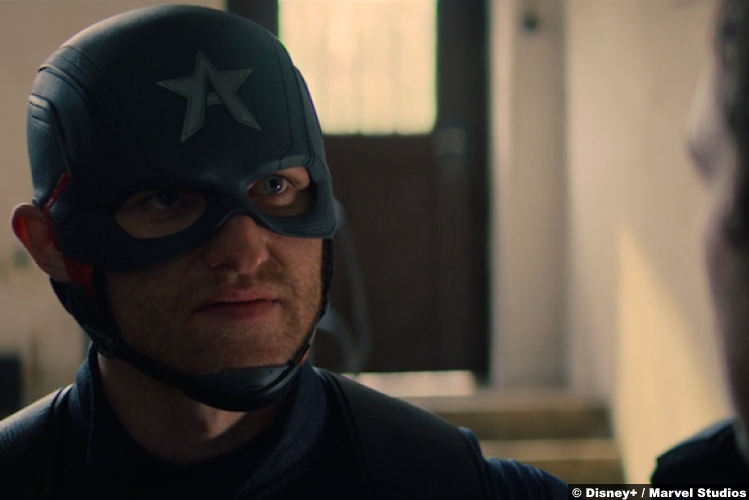 The theme was best represented by John Walker’s descent into villainy. I don’t know if I’m happy or sad that the new Cap proved his haters right, but that’s just how it goes sometimes. Some people can rise above negative stereotypes and first impressions, and some end up being perfectly pegged the first time you meet them. John Walker is an unstable, insecure, entitled person. He had a chance to grow into the worthiness of that shield as he lifted it over the body of a rando subordinate, working for the person who killed his partner. He could have stepped back and arrested him. Instead, he brought the hammer down and killed him. It was almost the moment at the climax of Civil War, as Steve defeated Tony in battle, raised his shield and could have taken off his head, but instead went for the incapacitating blow, ending the fight and walking away (handing over the shield too, by the way). John had his Civil War moment, his chance to lay the first stone in the monument of his legacy…

and he chose murder.

He was tempted with the forbidden fruit and he ate from the tree, almost certainly losing paradise in the process. We’ll see next week what the official consequences are, but one thing’s for sure, in the mind of the people who matter in the MCU, there’s no going back from what Walker did. Sam and Bucky were already cold toward him; there’s no winning them over now. I wouldn’t be surprised if old man Steve Rogers himself cameos next week to offer a sage and somber end to the troubled soldier’s career.

Episode ratings, if that matters to you: 9/10, 9/10, 10/10 – The final twenty minutes of episode four were an absolute tour de force, setting the stage for what will definitely be an emotionally charged, action-packed final two episodes.