Your SO OF COURSE preview of WWE TLC 2020

the December PPV. Five bucks says you can’t remember the main event. I’ll give you ten if you can name even a single match. I got nothing.

None of that matters now though because it’s Royal Rumble time! It’s time again for the three-month stretch where things happen and things matter! Who will main-event WrestleMania?! Who will walk into the show of shows with the WWE and Universal Championships?! How will Vince McMahon screw up the best single-match of the year this year?! Let’s find out! 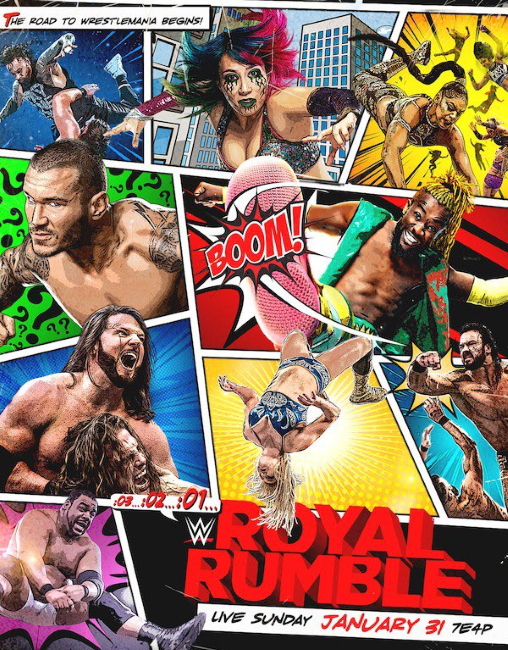 What even is this? It’s most wrestling fans’ favorite single match-type of the year. When done right, it’s hard to top a Royal Rumble. You get a great mix of current feuds, future feuds teased, nostalgia acts, debuts, returns, finishes that either shock or feel earned; it’s a great match.

The women’s event isn’t as hyped as it has been in years past, but the winner feels like a wide-open field this year so that’s always exciting. The trick to a good Rumble is to weave mini-stories throughout the match, culminating in little climaxes every ten minutes or so. Prior women’s matches haven’t really done this, maybe because the roster hasn’t been big enough or had enough history to make that work, but maybe both problems will be remedied this year.

My only concern is Charlotte. I do not want to have to write another installment in the “let’s talk about Charlotte’s Flair’s push” annual series. If there’s a single lady this year about whom people are saying “she’s winning,” it’s her. Hopefully, WWE will catch on to that and use Charlotte as the decoy for the true winner.

Does anyone care? 10/10. The novelty of the match is enough to make it a must-see.

What even is this? It’s Drew McIntyre vs Goldberg. Nobody knows why. Look, WWE just signed yet another literal-billion dollar deal, this time selling the rights to the WWE Network to NBC, to integrate it into their Peacock streaming service that no one wants. So far be it from me to tell this company how to run their business. I’m just saying, if they can be this terrible at storytelling and still fall bass-ackwards into a billion dollars, who knows what kind of cheddar they could make if they actually, ya know, tried? Anyway, Drew takes on what’s left of Goldberg.

Does anyone care? 1/10 – There is a 1% chance that Drew just straight up murks the old fart, beats him in two minutes with a claymore and retires him for reals then and there. Of the remaining 99%, I would put 70% on some kind of a non-finish, both to keep the belt off Goldberg, while also preventing Goldberg from eating a loss for some reason. It’s very important that Goldberg remains protected in this, the year of our Lord, two thousand and twenty-one. The last 29% is the “Vince had a wild idea that begins with Goldberg actually winning the WWE Championship…” I don’t want to go down that route.

What even is this? It’s Asuka and Charlotte vs. Nia Jax and Shayna Baszler, and I know I already expressed my angst over Charlotte winning the women’s rumble and if she was going to win it then this match would almost certainly have to come first. Since there’s no other reason why the PPV should start with any other match but the women’s rumble, if it doesn’t and if the tag match comes before it, you’ll know this is why. You notice I’ve written a whole paragraph and haven’t said a word about this match. There’s a reason.

Does anyone care? 0/10 – Asuka is neutered. Charlotte is tired. Nia Jax is a reckless joke. Shayna Baszler is mismanaged. What part of this match is supposed to make me care?

What even is this? It’s a match that promises to be a lot of fun, a lot of brutality, and sadly very likely Kevin Owens’ last crack at a top title for a while. Roman Reigns is defending and with him in the middle of an epic run, there is no reason even to think about a title change so close to WrestleMania. Roman Reigns vs the Rumble winner is the obvious choice to headline the big dance, so I expect this to be a slobberknocker that ends with Owens losing 1-2-3.

Does anyone care? 9/10 – If hardcore brawling is your thing, you’re going to get a lot of it here. I expect something like a PG-version of the Cactus Jack vs Triple H match at the 2000 Royal Rumble that helped solidify Triple H as the top heel champ of the company.

What even is this? It’s most wrestling fans’ favorite single match of the year…in theory. It can be done well and has been in the past, but more often than not WWE overthinks it and screws it up. When done wrong, a bad Royal Rumble is meandering, boring, predictable, and frustrating. We’ve had too many of those in recent years. When done well, it’s a variety show mixture of nostalgia, comedy, drama, thrills, and momentous victory. The Rumble is one of those matches that the hero should win by default. Every now and then there’s a good reason to give it to a heel, but usually, this is the match that launches a babyface onto the road to glory at WrestleMania.

Does anyone care? 10/10 – This is 1A along with the WrestleMania main-event when it comes to “if you only watch one match a year…” Yeah, everyone cares. As for who wins, I’ve got money down on DBry to start his path to retirement. It’s always possible we get a shocking Lesnar return, setting up Reigns v Lesnar with Heyman in the middle. That’s certainly worthy of Mania. I might even prefer that to Bryan vs Reigns, as long as it meant keeping Bryan around for another year. So long as some random turd doesn’t win it, or someone that becomes super obvious from like the first five minutes in, thus ruining the suspense for the next 55 minutes, I’ll probably be happy.