In talking about people receiving messages from Mother Abagail and the other voice last week, I might have made it seem too binary. Because it’s not that you hear from one or the other. You can receive messages from both, and it’s up to you how you proceed. 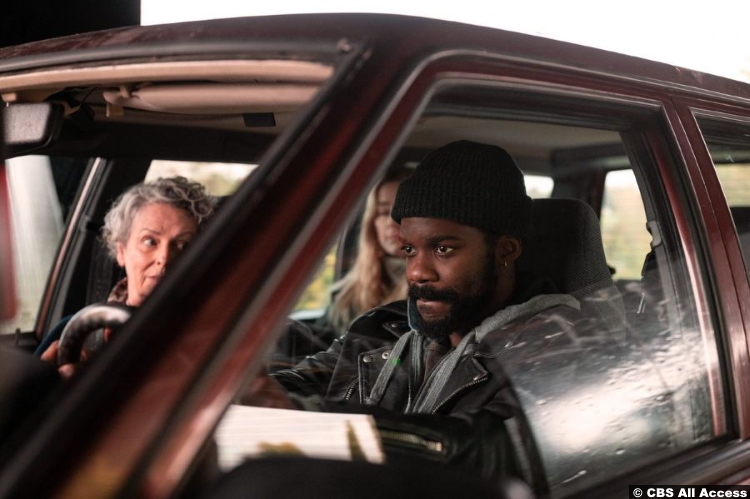 We have that point illustrated this week by Larry Underwood (Jovan Adepo). He’s a man at a crossroads, like a lot of people in the wake of Captain Trips, but that was true of him before the great plague, too. That was when he was an up-and-coming musician. Unfortunately for his career, his big break came at about the same time the world was shattering.

In flashbacks, we see that and we see that he wasn’t the nicest guy to begin with. He wasn’t evil, mind you–maybe only by the strictest measure–but he was certainly opportunistic. He has no qualms about, say, stealing a song. Or robbing one of the plague dead.

But at the same time, he loved his mama and he tries to do right by her when she gets sick. It’s not enough, though, and that’s something that clearly continues to haunt him. We see it literally when he’s temporarily separated from his first traveling companion, Rita Blakemoor (Heather Graham). Down in a sewer, he thinks he sees his mother’s body floating. And it talks to him.

As for why Larry is in a sewer in the first place, it’s because some people won’t have to make the choice between Mother Abagail and something else. Some people see the end of the world as an opportunity to shed the roles and ignore the rules they never really believed in to begin with. 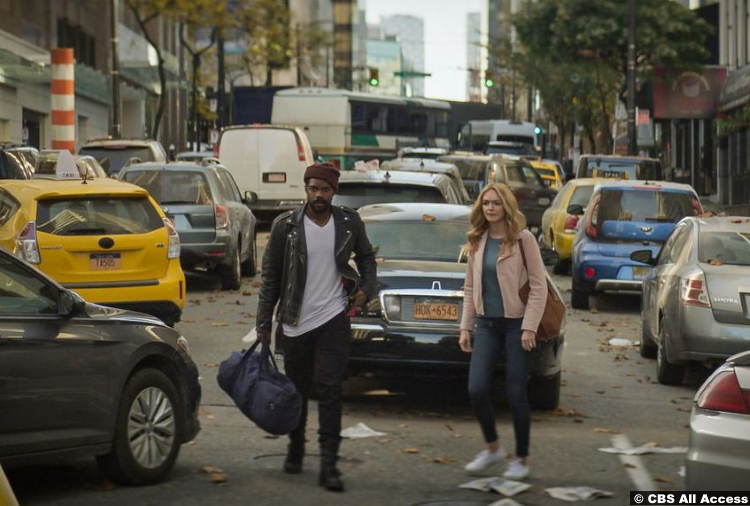 To wit, Larry and Rita are having as pleasant a walk as you can have when you’re post-coital and strolling through a city of corpses. A man, a stranger, approaches them and offers Larry a million dollars if he can “borrow” Rita. First of all, what the heck–sorry for the strong language–is Larry gon’ do with a million dollars in an apocalypse? I guess he could burn it for warmth. Second of all, yuck. Anyway, he and Rita try to ditch the guy (and his pals) by diving into the sewer. It’s very gross–it’s a sewer–and Rita can’t take it. Larry can take it only so far as hallucinations of his dead mom, but somehow Rita is right there when he crawls out of a manhole, finally outside the city.

And then she kills herself. I mean not at that exact moment, but it might as well be. If there is a big weakness in the series so far, then it’s the flimsy characterization of the women in the story. For instance, we also meet Larry’s second traveling companion, Nadine Cross (Amber Heard). We know she was maybe a teacher and she’s traveling with a silent boy she calls Joe, but that’s about it*. The bulk of the rest of the episode is devoted instead to Lloyd Henreid (Nat Wolff).

Lloyd is much more clearly marked as a bad boy, but still, you can’t help but sympathize with his predicament, post-plague. We see in flashbacks that while he was playing at being an outlaw, he didn’t really seem to have it in him to be the violent type**. But still, he’s made bad choices, particularly in his selection of friends, and so now he’s in prison. That’s never fun at the best of times, but it’s a living death now. He’s trapped in a cell as everyone and everything dies around him. He’s starving with little to eat but that which is almost too horrific to contemplate. 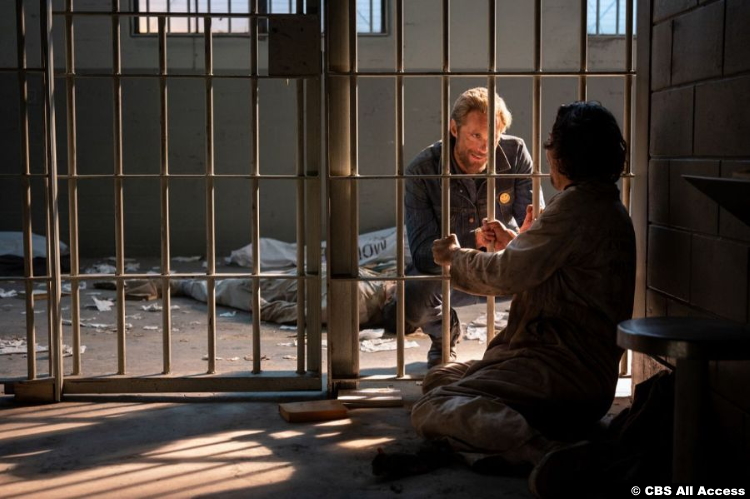 And then a savior appears. Randall Flagg (Alexander Skarsgård) materializes outside Lloyd’s cell door. He’s the other voice in the darkness–what you hear when you stop listening for Mother Abagail. And for some people, he’d probably have to have a big sales pitch. But to a guy who’s trapped in a cell, with nothing but the dead to eat, all Flagg has to do is describe what actually sounds like a delicious meal. Lloyd can have that and more, and all he has to do is make a promise. Promise his loyalty to Flagg and freedom is his.

In his case, the choice is understandable, although it does come with dread. Lloyd might not be the violent type now, but I have a feeling that’s all about to change.

7/10 – As I said, I don’t love that the ladies are getting such short shrift here. We’ve had two episodes so far and gotten four men’s stories. Meanwhile, the womenfolk in those episodes have largely been afterthoughts. In addition, while the scattered time storytelling was fun last week, it does rob the story of a lot of its suspense. We didn’t have to worry about Larry during his flashbacks, for example, because we already know he makes it to Boulder.

*We also know she has a stone like the one Lloyd gets.

**I know Lloyd’s past in the book, but with the show, I’m just going to go with the stories they introduce.