Book Review: We Promised You a Great Main Event

By Matthew Martin
Wrestling Book Reviews
This page contains affiliate links. At no additional cost to you, we may earn a commission if you click through and make a purchase. Learn more

The world of the WWF/E is a two-sided one. On the surface there is the finely polished, PR-approved image of the publicly traded company; the one that sends custom title belts to sports teams, heavily invests in “partnerships” with charities, and rubs elbows with hall of fame actors, entertainers, and Presidents of the United States. That’s the WWE that Vince McMahon wants you to see. That’s the WWE that Vince McMahon wants you to read about when you google the letters “WWE.” And yet, despite how hard the company has worked to create and cultivate that image, the fact is anyone who has ever given WWE a moment’s contemplation knows that the public image of the company is a mirage, and the more they insist otherwise, the more obvious the mirage is.

Behind the façade is the same sleazy, trashy, carny, “pro wrestling” company that Vince McMahon bought from his father and expanded (i.e. swallowed up the competition) into the defacto “brand” of the whole sub-genre of entertainment. Today there is TNA, AEW, ROH, and other western-hemisphere-based “pro wrestling” companies, but their footprint pales in comparison to that of WWE. Vince’s sports entertainment empire is Kleenex. It is Velcro. It is synonymous with itself.

And how they got to that point involves enough horror stories, backstabbings, and other shady dealings to fill a book. In addition, there are enough rags to riches, American grit, intrigue, and sheer dumb luck stories to fill an entirely separate book. Just recently it was announced that Netflix was set to produce a documentary about the life of Vince McMahon. WWE is listed as a co-producer so you can be sure it will be biased.

If you’re looking for something more even-handed, Bill Hanstock (writer, producer, blogger, Emmy winner) has a new book out, entitled: “We Promised You a Great Main Event – An Unauthorized WWE History.” Just from the subtitle you can set your expectations high enough to assume the work will present the history of how Vince McMahon Sr.’s New England-based wrestling kingdom became a global sports entertainment empire in a way that is fair and balanced. As a matter of fact, it does just that. 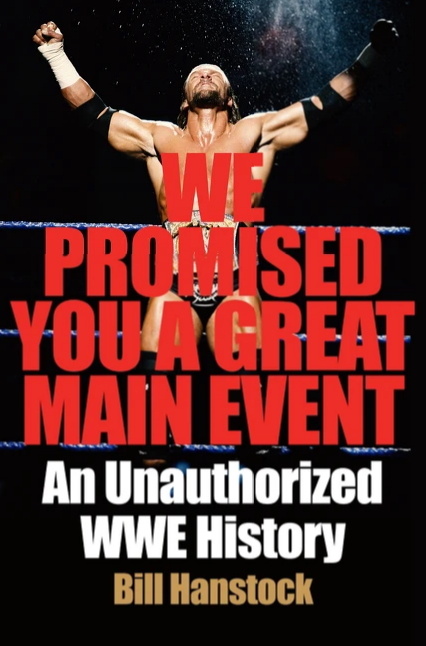 It doesn’t go too deep into any one particular issue. There’s simply too much to cover in only 400 pages for any history beyond the surface-level. There’s also very little that a so-called “hardcore” WWE fan doesn’t already know. That’s okay; the hardcore fan isn’t the audience here; it’s the casual fan, or the curious outsider that he’s trying to win over. In that case, it’s important to point out that the book is neither a fluff piece nor a hit piece, and that’s a tightrope few can walk when writing about the WWE empire. Most relish the opportunity to focus only on the flaws, while others covet the access and interviews that only the most flattering works can provide.

Hanstock plays it down the middle, writing as a proper historian, allowing the readers to make up their own minds about the company’s actions, whether it’s about the swallowing up of rival territories, the steroid scandal, the death of Owen Hart, or the company’s (read: Vince McMahon’s) insistence on the show never stopping, under the guise of “entertaining people” or “taking people’s minds off other troubles” when really it’s a naked and stubborn unwillingness to give up on box office revenue…but there I go being negative. The book addresses those issues but leaves it to me—the reader—to draw my own conclusions.

Sometimes I wish the writer would have taken a stance: The Owen Hart death, for example, is discussed in terms of how preventable the death was and how Vince insisted “the show must go on.” Most fans latch onto the latter detail and miss the more egregious point: Owen’s “accident” was the result of willful negligence, purely because Vince and the WWF cared more about the “presentation” than they did the health and safety of the performer. Nevertheless, Hanstock plays it on the level, and leaves it to me—the reader—to shake my head and curse, not only Vince McMahon, but myself for continuing to pay for his product.

As a result, Hanstock’s book fits into a rare segment of the WWE News category. It is neither kayfabe nor discriminatory. There are very few books out there on this subject matter that treat its history with so much “respect.” There’s no reverence here, mind you; there’s respect. Pro Wrestling is, in many ways, the most maligned, mocked, and misrepresented form of mainstream entertainment. It draws millions of viewers multiple times a week, draws (pre-pandemic) thousands of fans to multiple venues across the globe, and has produced some of the most famous entertainers in pop culture, and yet it remains an entity looked down on by those who don’t care for it.

The old saying is true: If you’re a fan, no explanation is necessary; if you’re not, no explanation will suffice. WWE, however, is not treated like the NBA. If someone doesn’t like pro basketball they simply change the channel when it comes on. When someone doesn’t like pro wrestling, there’s an immediate mockery of anyone who does, and that necessitates an immediate defense by those who do, as well. Understandably then, the first thing one reads in the book is a brief “yes we know it’s fake” dissertation because that’s something we all have to say lest we be scorned by the same people who watch America’s Got Talent with a straight face.

Wrestling needs more writers willing to regard its place in entertainment history. For literal centuries, pro wrestlers have been conning rubes with pretend fights inside circus tents, and dirty, smoke-filled bingo hall. Remarkably, after a series of extraordinary circumstances, despicable practices, and genuine skill, the WWF/E has risen from those dirty origins to be a glistening, sparkling, ubiquitous brand in popular culture and global entertainment. That’s an amazing story with an amazing history behind it.

Bill Hanstock’s book does a fine job of chronicling just how that history came to be.

9/10 – For a casual reader curious to know how a regional pro wrestling group became a global sports-entertainment juggernaut (warts and all), We Promised You a Great Main-Event does its job. Long-time fans will find little new to discover, but for those who don’t know the story, it is told here very ably, indeed.