After a strong showing by AEW, NXT rebounded with a solid month. Was it enough to topple the reigning champ? Let’s see how both brands performed on Wednesday nights in September.

Someone help me understand this thought process. I’m going to lay out a couple of seemingly unrelated things here, to start with…

So, with those two ideas on the table, someone help me understand why WWE has not moved NXT to the Thunderdome? Why, if they want us to think NXT is the “main roster” now, and if they (really) need NXT to compete better against AEW, are they still running NXT shows in a rinky dinky arena with lighting that makes it look like the stage, ramp, and ring are floating in a dark void of nothingness and despair?

AEW, meanwhile, has been running shows in an outdoor venue, with fans relatively distanced but seemingly in more abundance than on NXT. The difference is noticeable, just as it was before COVID hit and AEW was running arena shows with thousands of more fans than what NXT had at Full Sail. Right now there’s no comparison: AEW looks like a major wrestling promotion running top tier shows as best they can during the COVID situation. NXT looks like an indie fed struggling to keep up with the same situation.

To put it simply: NXT is in a rebuilding phase right now. I thought they had their next main-event superstar in Keith Lee, who could carry the title through a year or so worth of storylines. Keith was needed on RAW I guess, so they pulled the title from him almost as soon as they put it on him. It was the kind of hot shotting NXT rarely ever does with any of their belts, but especially their world title. The last time the championship was depreciated like that was probably the dark days of Bobby Roode and Drew McIntyre’s reigns of boredom. At least those guys were still given months with the belt to justify their wins. Lee held the NXT title for a month and a half, and who knows if Karrion Kross was meant to be a long-term champ. I have my doubts, but either way, he lost the title and now Finn Balor has it. Maybe that will pay off next month, I dunno. The title scene was a mess in September, though. 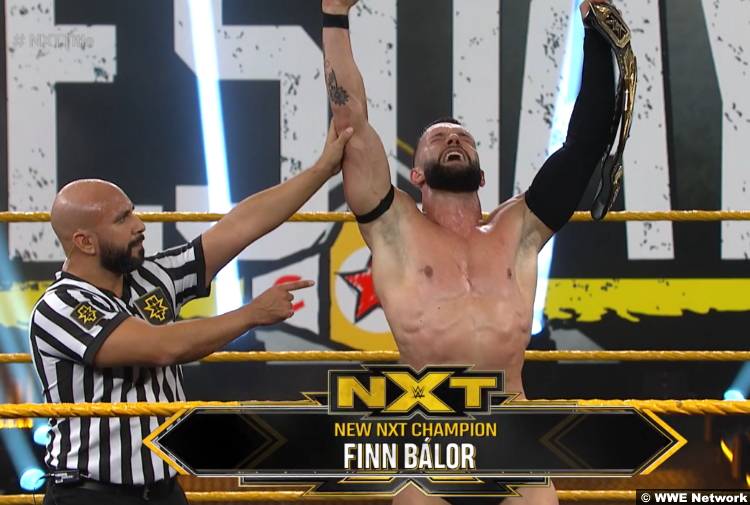 That being said, the first two weeks of the month were rock solid. I’ll go ahead and pretend NXT’s Tuesday night offering happened on Wednesday, in which case the big Super Tuesday show lived up to its billing, especially in the 60-minute main event. The follow-up match between Balor and Cole was equally as great, although I can’t help but lament how, years ago, “old” NXT would have built up to that match over the next three months. Giving it away the very next week was akin to Nitro running Goldberg vs Hogan with a half-week’s notice. The last few weeks of the month seemed like the brand was out of gas, without much of anything standing out.

Over on AEW, the opposite occurred. The month started slow and slowly picked up steam, culminating in an epic parking lot brawl between Best Friends/OC vs Santana/Ortiz. It was as good for their brand as the 60-minute match was for NXT this month. AEW also had a ton of storyline development, particularly between Omega and Page, as well as a ton of excellent one-off matches, like Mox vs Kingston, and Brodie Lee vs Orange Cassidy. The company is hitting its stride and though I’m tempted to give them the win in this category too, I think I’ll call it a draw on the strength of NXT’s solid first half of September.

I can’t call Finn Balor winning the strap a surprise for NXT. I’m sure no one expected him to win it this quickly but once it was clear Kross was out, Balor was everyone’s presumed pick. Over on AEW, the return of Cody Rhodes (with darkened hair) was a surprise, especially since most thought he’d wait until later in the Fall to return. AEW has also been really good about rotating their roster around, as well as bringing in new talent, like the NWA Women’s champ and the aforementioned Eddie Kingston. The surprises aren’t earth-shattering but there’s almost always something eyebrow-raising happening every week on TNT, which make the big shocks even bigger. The nod goes to them, therefore, and with it, the win.

Neither show was perfect this month, but AEW continues to operate as if they’re a major league promotion, while NXT continues feeling minor in comparison. Until that changes, AEW is going to continue winning more often than not. They’ve been at this for a year now; almost all the kinks are worked out. I expect things to get even better as they move into their second season on TNT.