Your SO OF COURSE preview of WWE SUMMERSLAM 2020!

Look I’ma level with everyone:

My level of enthusiasm for WWE programming is so low, the company would have to try their absolute best just to reach “disappointment.” I don’t think the programs have been this stale, this bland, this uninspiring since the first half of 2011,  when the ratings were literally three times as high as they are now, by the way. It makes me think of this promo from 2014…

The Monday Night Raw that featured this promo averaged about 4.5mm viewers. This past Monday night, the show averaged 1.5mm viewers.

A lot of people quit watching.

As for me, I’m still here. I’m a survivor. I’m resilient. I’m…blinking SAVE ME in morse code. I feel like I’m in a hostage situation with Vince McMahon holding the rope. He is the infamous “audience of one” that forces all creative decisions to be filtered through his seventy-year-old sleep-deprived brain. He hires and fires “directors” of Raw and Smackdown the way French Kings disposed of unruly peasants. He has a wallet that’s fat enough to pay out five-year contracts on talent he has no intention of using, all to keep them from becoming hits with his competition, yet never stops to think “if these guys are good enough to make AEW successful, couldn’t I make them successful here?” He’s a myopic, fickle maniac, and nothing is going to get better until he stops running the show.

And I mean that.

You can track the trajectory of the WWF/E with him in charge and, but for a brief spike in the mid-’80s (when pro wrestling was a mainstream fad) and another in the late-90’s (when pro wrestling was a counter-culture fad), Vince’s control over his father’s company has been nothing but a steady decline. He’s masked this by buying out the competition and coasting on brief bursts of genuine popularity, but for the most part, he’s slowly (very slowly, but still) running the company into the ground.

I know, I know. The company has more money now than ever, but how much of their present “success” is sustainable? It feels more like a bubble than a genuine trend. They’re burning viewers faster than any long-running series on TV, well beyond the rate of decline other Cable shows are suffering in the era of streaming media. The biggest chunk of their revenue comes from the rights to their TV shows, but AEW has shown that pro wrestling can score solid ratings for pennies on the dollar compared to the billions Fox and USA are paying for Smackdown and Raw. Do you think those networks will pony up so much the next go-round? House Show revenue was cratering so badly the company has basically used the COVID-19 pandemic as an excuse to quietly end the concept altogether. The WWE Network which, when it was first announced, was supposed to be the long-term moneymaker for the company, has struggled to hold onto the targeted magic number of two million subscribers, and they’re well short of the four million subs they were targeting for within five years of launching (the service began six years ago, right around the time Triple H cut the above promo, basically daring fans to stop tuning in).

Here’s my unscientific breakdown of the WWF/E starting with the 1982 buy-out of the company by Vince McMahon. John Cena’s decade of dominance saw the longest period of stability for the company, but now that it’s over, the company has been falling and falling. Since 2014 or so, it’s been falling like a rock.

The current era of sucking came to a head last Monday night when the recurring villain-stable Retribution had their big coming-out party. During the segment, we were given the names of the players involved; such memorable names as Slapjack, T-Bar, and Mace. These are the names the WWE came up with. This is the best Vince McMahon had.

These are not pro wrestling villains; they’re the names you’d expect to find in a Teenage Mutant Ninja Turtles video game.

And that brings us to Sunday and the Clash of Champions PPV. 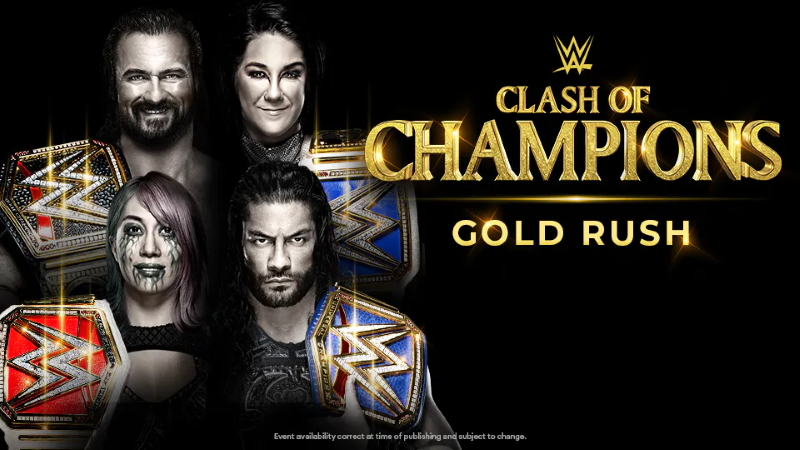 I see one thing: Roman Reigns vs Jey Uso, but even in that case, the finish is a foregone conclusion. There’s some uncertainty about the main event, and the possibility of Randy Orton walking away with the title is there, but I’ve already lost interest in the feud so teasing a Randy Orton title win isn’t going to draw me back. No, other than Roman Reigns (who instantly became the most compelling character in WWE the moment they turned him loose and let him be the natural heel he is), Clash of the champions features a whole lot of nothing.