Your SO OF COURSE preview of WWE TLC 2019

Your SO OF COURSE preview of WWE Survivor Series 2019!

Not a whole lot happened at Survivor Series since, ya know, the whole show was built around non-title exhibition matches. Now comes WWE’s annual December PPV which, for the better part of a decade has been called “TLC” because WWE has lost all ability to build to these sorts of matches organically and instead just creates whole shows around them in the hopes of popping a subscription to their increasingly overpriced streaming service. I mean, come on, Disney+ is only seven dollars. Is the WWE Network really worth ten?

Anyway, THIS is your SO OF COURSE preview of WWE Tables Ladders and is this really how we’re going to kick off the last full week before Christmas, with a half-baked, hastily-booked PPV whose most heavily-promoted match is built around a cuckening 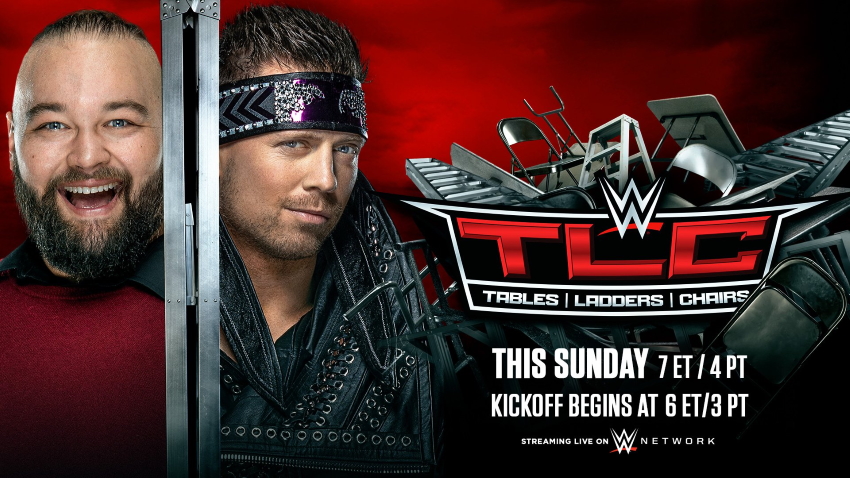 So what’s on the docket for the show? Anything good?

Well, there’s a TLC match between Becky Lynch and Charlotte…teaming up against the Kabuki Warriors. There’s also Roman Reigns vs “King” Corbin, who look to settle their feud that’s been brewing for several weeks now. Oh, and let’s not forget Miz taking on Universal Champion Bray Wyatt in a match that, by all accounts isn’t even for the Universal Championship. And of course, there’s the Cuckening match between Rusev and Bobby Lashley. The rest is…not much.

Should I care? No, because of what I just said I think this match has the potential to be a total stinker.

What’s the best TLC album cover? Crazy Sexy Cool is iconic the way With the Beatles is iconic. It’s got the stark, washed out, orange (tangerine?) color with the highlights of the trio’s faces in high contrast; just classic. Runner up goes to FanMail, which has the most 1999 cover art ever.

NEW DAY vs THE REVIVAL

What is it? Hopefully the last hurrah of The Revival before their contract is up and they can go somewhere where they are really appreciated. Or just go to NXT, whichever. New Day are the champs and this is the rematch. I expect no shenanigans, no funny business, no ballyhoo of any kind apart from the usual New Day antics.

Should I care? Nah. New Day needs new material and the outcome is foregone.

Who is the best TLC member? Saying LeftEye sounds trite considering the circumstances, but even if she was still alive she’d still be tops. Start with I Believe In Me, Rags to Riches, and Block Party and go from there. Dynamite performer, gone too soon.

What is it? It’s a feud that happened because Black spent six months in a broom closet and Buddy had the audacity to do a wellness check.

Should I care? Story-wise? No. In-ring, this has the potential to be the sleeper hit of the night. Both guys can go. If given time, this could be a ton of fun.

What is it? Shut up.

Should I care? By golly why start now?

What’s the most underrated TLC album? 3D came after the group’s popularity had waned to the point of their being a nostalgia act. Nevertheless, they showed they still had what it took to be relevant if only they could get airplay. They never really did get airplay, though, so 3D became a great record that fell through the cracks.

BRAY WYATT vs THE MIZ

What is it? It’s a match…now try to keep up with me here: This match has Bray Wyatt, but not the Fiend. It has The Miz but not as a smarmy “I’m better than you” heel. It has the Universal Champion, but the title’s not on the line. What is it? What is it?! It’s a waste of time, that’s what it is.

Should I care? What’s there to care about? The outcome is inconsequential.  It’ll probably end with a run-in.

What is it? The only match worth watching. With any luck it’ll get dropped to the opening bout so I can watch it and then turn the show off. Charlotte has got a bad case of the mistys, having been hosed in the face by Asuka off and on since Survivor Series. Meanwhile, Becky is channeling her inner Stone Cold, went and fought both Asuka and her tag champ partner Kari Sane in a handicap match. She won but only by DQ and got put through a table for her trouble. That led to the former rivals deciding to team up to put the champs down for good. If they win, they get sweet revenge and, as a pleasant by-product, they get to hold the tag titles like John Cena and HBK, or HBK and Stone Cold, or Stone Cold and Mick Foley, or Mick Foley and The Rock. Paul Heyman’s old school booking fingerprints are all over this one and I’m really excited about it.

Should I care? Yep. The storyline has been simple, clear, and well-told, with strongly-defined characters, motivations, and goals for all parties. There’s great story potential coming out of the match, no matter who wins, and the TLC stipulation should be put to its fullest effect. I can’t wait for this.

What’s the best TLC song? Everyone will say Waterfalls but the correct answer is No Scrubs. Waterfalls is catchy and mellow and pleasant to listen to but No Scrubs is a song you bop to in the car, no matter if it’s 3pm on a Tuesday or 8pm on a Friday. No Scrubs is lit.