November brought a lot of craziness on both AEW Dynamite and NXT on USA. The former show spent much of the month dealing with the fallout of its first post-Dynamite PPV event, Full Gear. The latter show spent the month building up to the big, cross-branded super show, Survivor Series (as well as it’s own special event, War Games III). 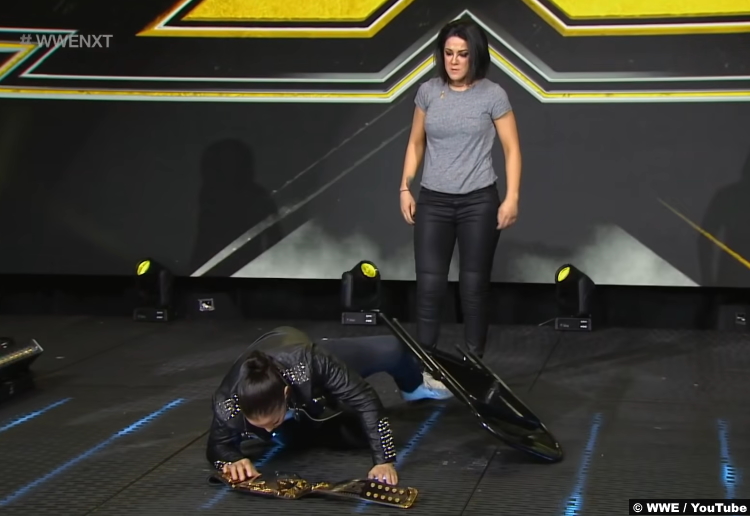 Since AEW only has a few PPV events a year and NXT won’t see the kind of Raw/SmackDown crossover that November enjoyed until the weeks leading up to WrestleMania, November felt a lot like an odd-duck month. It’ll be much more interesting to see how both shows handle December, as neither will have a PPV to build up to, and both will have their own creative ways to deal with Christmas falling on a Wednesday night at the end of the month.

In the meantime, here are the winners and losers for November…

AEW continues to fiddle with the knobs as they try to find the right sweet-spot from an audio-presentation standpoint. It seemed like things were finally figured out but the last show of the month had some major snafus, with crowd noise cutting in and out, and mic audio not being run through the sound board. NXT, being a product of WWE, is always going to be more of a well-oiled machine. On the other hand, being in Full Sail, as opposed to an arena, is always going to be a hindrance to NXT. On the other, other hand, NXT has Mauro Ranallo (though not on the final show of the month), and there’s no better commentator working today. Neither show really jumped out as a superior product in November.

NXT had some hot atmospheres this month, thanks in part to the unpredictable nature of the Survivor Series build. Many shows featured run-ins by Raw and SmackDown talent and the crowd did a great job selling the “anything can happen” feel. Still, though, AEW’s crowd continues to impress. They’re not selling out their arenas but good camera work hides that fact, and the passion of the audiences make up for the handful of empty seats. AEW’s crowd is like an NXT Takeover audience every week, and that’s the highest praise I can give it. Even when Dynamite has some lulls in its cards, the crowd keeps things watchable, and when the show has a hot match, the crowd pushes it to another level.

I don’t know how long NXT can sustain itself running quasi-Takeover shows every week, but for the time being, they’re getting the nod here for the sheer quality of wrestling on display every episode. AEW is no slouch either, but they’re much more willing to spread their big matches out, probably because their roster has fewer major attractions. Moxley vs Allin in particular was another star-building moment for the young sensation, Omega vs Pac II lived up to the hype as well, but NXT takes the cake here because they had two hours of Omega vs Pac-quality cards every week for a month.

There was no way NXT wasn’t winning this category this month, not with the litany of Raw and SmackDown talent that invaded the show on the road to Survivor Series. AEW didn’t really compete here, at least not on Dynamite (MJF finally turning on Cody happened at Full Gear) so NXT was probably looking at a win here this month anyway, but they blew it out the water with everything from Bayley showing up to deck Shayna Bazler, to Becky Lynch kicking off one episode with a homecoming that brought her character full circle.

There was a clear winner this month, built on the foundation of some incredible wrestling matches and enough of an “anything can happen” feel to keep you engaged from the first episode to last…

AEW lost the ratings battle for the first time last week. It’ll be interesting to see how they bounce back, in part because Survivor Series is now behind us, and also because the show will now have a reason to try some new things to win back the viewers who were there in the beginning and have since moved on.

As with last month, the real winner here is you. Wrestling fans have two tremendous shows, each with distinctive rosters and production styles, to choose from every week. You can now get your fill of major-league American wrestling—four hours of it every week—without having to watch a second of Raw or SmackDown.

If that’s not a win for the fans, what is?