Your SO OF COURSE preview of WWE SummerSlam 2019

and with Football back and next month’s big roster shakeup and SmackDown move, WWE has slipped into a bit of a holding pattern. There are a lot of storylines happening, though, and I think that’s the influence of Paul Heyman and whoever is running SmackDown, but there’s still a bit of staleness to everything that’s probably not going away anytime soon.

In all honesty, I am maybe 4% excited about this show, and though I’m sure a few of the matches will be good, there’s nothing that’s really grabbing my attention and not letting go, especially since the King of the Ring finals have been moved to this coming RAW. Since I won’t get to predict that here, let me just say my heart says Chad Gable but my jaded, cynical head says

So here we are. September whatever. Ready for the next WWE PPV event that will feel overstuffed and underbaked all at once. Without further ado, THIS is your SO OF COURSE preview of WWE CLASH OF THE OH CRAP AEW LAUNCHES ON TNT IN A MONTH AND WE HAVEN’T BEEN THIS THREATENED SINCE THE LAUNCH OF MONDAY NITRO QUICK PUSH A BUNCH OF GUYS FANS ACTUALLY LIKE FOR A CHANGE BEFORE THEY LEAVE US FOR GOOD 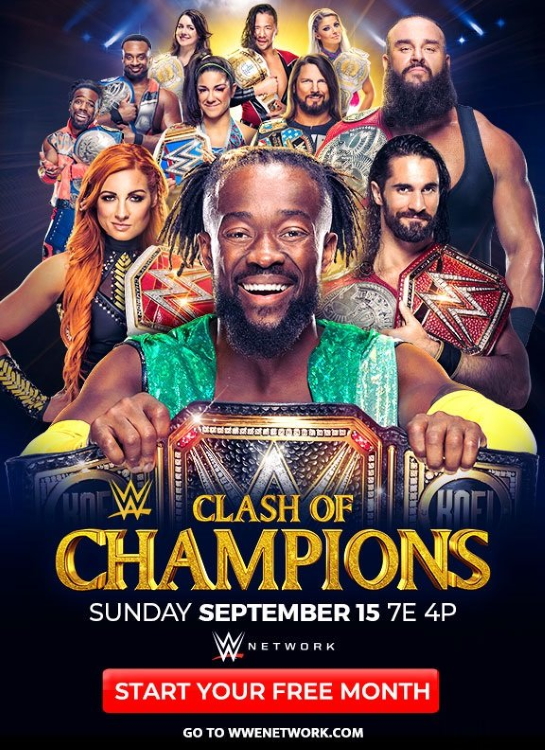 We’re going to keep this super short because it’s late-thirty and, as mentioned, my enthusiasm right now is preeeeety low. Let’s just ask ourselves what we’d like to see, and then send in the clowns to tell us how disappointed we’re going to be (and why)…

What should happen? Since the outcome here will certainly play a role in determining the finish to the Universal Title Match later, I’m to go with Rollins and Strowman retaining the titles, though I suspect they will drop them on RAW in two weeks.

What should happen? Well, of course, Bayley should win. She’s only just beginning her heel run and having a belt is the best way to solidify that turn as “a big deal.” Taking the title away from her now not only undercuts her as a champ but it undercuts the whole heel turn.

THE NEW DAY vs THE REVIVAL

What should happen? Fast, furious action, some clever team-work, inventive spots, big finishers, fun false-finishes, and the Revival winning the gold even though I’d rather they just jump ship to AEW.

SHINSUKE NAKAMURA vs THE MIZ

What should happen? Nak has barely done anything with the Intercontinental Championship. Maybe if the company invested a little more into him as champ, gave him a few more feuds, he could bring the belt back to legitimacy. Anything would better than hot-shotting the title to someone with no story or plan.

What should happen? The feud has centered entirely around calling Nikki Cross ugly. Not psychotic, not unstable, not unpredictable; those are all attributes that can be applied to male or female wrestlers and can get someone over as a loose cannon kind of star. No, let’s call her ugly, like the most uninspired sort of cheap heat you can give a female wrestler. I don’t even know who to cheer for. I want to see Shayna Bazler and Ronda Rousey make a surprise appearance, wreck everyone in the ring, and claim the tag titles for themselves.

What should happen? Twenty minutes of uninterrupted wrestling with a clean finish and even a handshake, I don’t care if AJ is a heel.

What should happen? Erick Rowan gets hit by a car driven by Rikishi. Daniel Bryan wrestles in his stead. I’m sure that’s the endgame to this terrible feud but I’d prefer not sitting through Roman vs Rowan to get there.

What should happen? A dumbed-down version of Seth Rollins vs Brock Lesnar, only with The Fiend interrupting things, setting up a triple-threat match that he inevitably wins.

What should happen? They should just redo their NXT Takeover match that is still my favorite women’s match of all time. Only this time the champ loses. Sadly that means Becky loses, and while I think it’s too early for the top star of the show to drop the title, I don’t see anyway Sasha can come back like she did and not walk out with the belt. Just book it the way you would a Stone Cold title change; shenanigans everywhere and end with the match-loser looking for revenge.