Your SO OF COURSE preview of WWE Elimination Chamber 2019

Your SO OF COURSE preview of WWE Royal Rumble 2019!

Seth Rollins won the men’s Rumble, punching his ticket to WrestleMania to face Brock Lesnar. It’s a match that, in a normal wrestling show, would play off the tremendous history those two men have, what with Seth Rollins literally crashing the WM31 main-event and stealing the WWE Title, then playing cat and mouse with Lesnar for most of the year that followed. But this is WWE so there will be no mention of any of that, I’m sure. But it’s fine. It’ll be fine.

It’s not fine but it’ll be fine. Sit tight, we have a whole article coming to discuss it.

Now it’s time for the first of two regularly scheduled bathroom break shows that fall in between the Rumble and Mania. These are the shows that will put all the rest of the pieces in place, wrap up any last minute title changes and name whatever remaining number one contenders need to be named before the big dance.

You know, the kind of stuff that could be done on any of the ten or saw RAWs between the Rumble and Mania but instead happen on the WWE Network and not on the show that is hemorrhaging worse than a 1980’s Terry Funk vs Ric Flair NWA Title fight.

But I digress, THIS is your SO OF COURSE preview of WWE ELIMINAT(E) THE THIRD HOUR OF RAW PLEASE! REPLACE IT WITH SOMETHING ELSE IF YOU MUST. ANYTHING ELSE. MAKE IT NXT AND MOVE THE UK SHOW TO WEDNESDAYS. MAKE IT A WOMEN’S ONLY SHOW. JUST DO SOMETHING TO GET “RAW” BACK TO TWO HOURS. THE SHOW IS DYING! DYING! 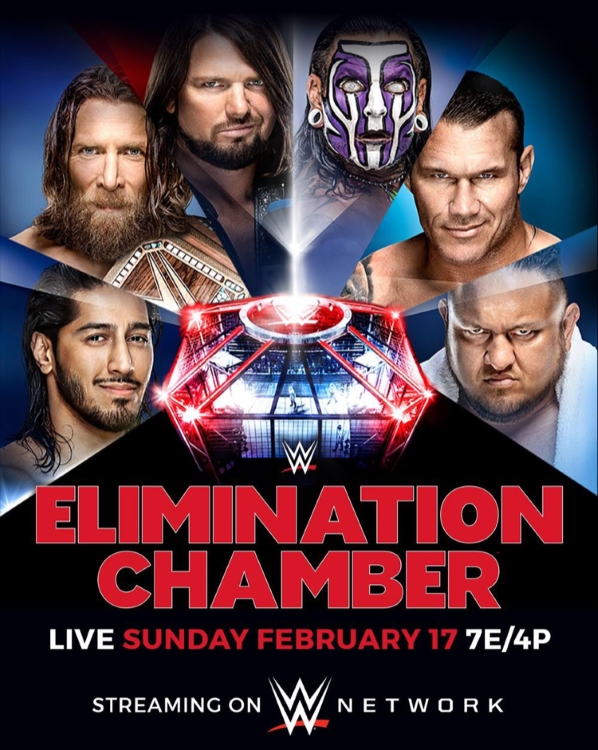 What it be: It be an exhibition match between a superstar who, once upon a time, way way back in last year, was the most popular male superstar on the roster but was fed to Roman Reigns and Brock Lesnar one too many times and now whoops we need him to be over again but he isn’t, he’s just sort of hanging on and getting by. Take a good look Elias, this is you in about three months. VERSUS…a guy who has maybe the worst popularity-to-TV segment ratio of any WWE Superstar since King Mabel. I can’t for the life of me understand the infatuation with Baron Corbin. He is a black hole. There is nothing he offers. He can’t wrestle. He’s not great on the mic. He doesn’t have a great look. He’s just a tremendous waste of creative power.

What it could be: Braun Strowman vs Aleister Black, in one of those “match ends with the ring collapsing” mega hoss fights that set up a Falls Count Anywhere rematch at Mania. I dunno. It could be anything that doesn’t feature Baron Corbin and I’d consider it a better use of my eleven minutes and thirteen seconds of bell to bell action.

What it be: It be the crowning of the company’s first women’s tag team champions. It’s a match (and subsequent championship) shared between both brands but I don’t know how exactly that’s going to work and I’m positive Vince doesn’t either. Even if he did he’s probably changed his mind ten times since then. The company had a shared WWE Champion for a few months at the start of the original brand split but it was quickly deemed a bad move and a second world title was commissioned. In this case, there’s simply not enough tag teams across both women’s divisions to have two tag titles so keeping the teams together is the only thing you can do. Personally, I think you should move all the women to Raw and devote the first hour to them. Have a world title, a midcard title of some kind, and a tag title. I would hate to lose their contribution to Smackdown because they—like everything else—are better written on the blue show, but sacrifices must be made. Until then the company will have one championship team and two brands of challengers.

What it could be: The easy call is Bayley and Sasha Banks but I’d much rather see them win it at Mania. In the meantime, I’d love to see the IIconics carry the straps until then. They’ve been one of the most entertaining acts in the company and, unlike almost everyone else in the match, they’re an actual tag team. These girls,

give them the gold.

THE MIZ & SHANE McMAHON vs THE USOS

What it be: It be Shane and the Miz, an unlikely tag team so unlikely the only thing more unlikely is the fact that (A) Miz hasn’t turned heel yet and (B) the act has actually grown on me. I don’t know if the Usos as champs again is anything I need to see, but then again they’re great and are rumored to be talking with AEW so…yeah they’re probably going to get a Revival-like run with the straps.

What it could be: Miz is most definitely turning on Shane and getting a WrestleMania match with him, which has sort of become the new “WrestleMania match with Vince” special attraction thing. Whether that happens here or soon after I dunno.  I would pull the trigger here and then spend the next six weeks letting Miz sink back into the role he was born to play: A villain with righteous indignation and a massive chip on his shoulder.

What it be: It be a Ronda Rousey squash, done only because you’d be stupid not to have Ronda wrestling someone on every PPV, TV Show, and House Show you have. She’s a natural and is only going to get better but she needs all the experience she can get leading up to Mania. That being said…

What it could be: It could be this:

If Ronda is taking a break after WrestleMania I really want to see her win one of those ten-second squashes that made her such a famous fighter in UFC. I hate it for Ruby Riott but she’s as good a victim as any. A quick, shocking win would reestablish Ronda, who has been knocked down a few pegs in her feud with Becky. Her mic work needs the most work and Ronda clearly struggled with the crowd turning on her. A win like in the gif above would go over big with the crowd and solidify her as the tweener/lean babyface in the upcoming triple threat match at Mania.

What it be: It be the main-event. That’s a big deal considering this is the Smackdown world title here and that belt hasn’t closed the show since…

Fastlane 2018! Oh wait, that was a Smackdown-exclusive event. The blue show has yet to have a main-event since the brands combined PPV events. It’s a shame Mustafa Ali was forced out of the match; hopefully he’s back in time for a WrestleMania payday and match with Randy Orton. In the meantime, Kofi Kingston went from random replacement #3619 to “next world champ, please” in the span of one sixty-minute match. Every instinct I have says Daniel Bryan will carry the title until at least WrestleMania (he just got his own custom belt; that’s almost always a guarantee for a long reign) but…

What it could be: … Kofi’s performance was a jolting reminder that one of the most talented and beloved vets in the company has yet to win the big one. A steal here and a feel-good reign to WrestleMania would be lots of fun. New Day as co-champs would be awesome. Where the belt goes from there, after Mania, can be settled later. Giving Kofi a win like Eddie had in February of 2004 feels right.

As for my entrance predictions…