The Elimination Chamber, 16 tons of steel and glass and 2 miles of thick heavy chain, a structure designed for one purpose and one purpose only – to cause harm to the human body. Since it’s debut in 2002 (a debut that was brilliantly teased in the weeks leading to Survivor Series), the Elimination Chamber has had an aura, a certain mystique, that lasts to this day. Unlike Hell in a Cell, which has become diluted through illogical use in the last two years, the Chamber still fires the imagination and rarely fails to live up to expectations.

There have been eleven Elimination Chamber Matches, with the bout becoming exclusive to the February PPV since 2008 (going so far as to have the event changed from No Way Out to it’s current titular form – except in Germany, where Elimination Chamber has an entirely different and sinister connotation), and this collection is an anthology of them all in their entirety.

Strap yourself in and get ready for the most brutal ride WWE has to offer. 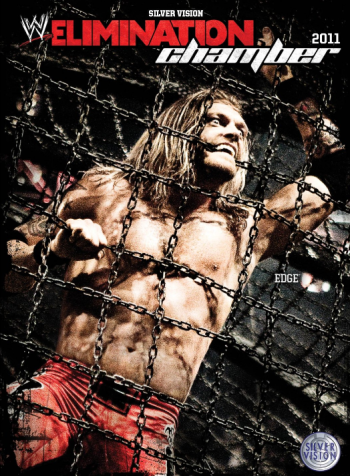 For the first time since it became a February exclusive, the Elimination Chambers would be for different prizes as the RAW bout would be for a shot at the WWE Championship at WrestleMania XXVII while the Smackdown  match would be for the World Championship itself.

Before we get to the demonic structure, Alberto Del Rio (the #1 Contender to the World Heavyweight Championship at WrestleMania) goes one-on-one with Kofi Kingston… and it’s a fantastic match; the perfect way to get 11,500 people amped up for the rest of the show. For just over 10mins, both guys shine with great moves, counters and near-falls. The finishing sequence itself was pretty sweet too and the time meant it didn’t overstay its welcome for an opener.

Following on from that, the Smackdown crew are up for their turn in the Elimination Chamber as Edge defends the title against Drew McIntyre, Big Show (who was a surprise entrant on the night), Kane, Rey Mysterio and Wade Barrett, with the main surprise of the bout being the showing of my good friend, Mr. McIntyre. WWE booked him as an out-and-out ass-kicker for this match and he lived up to the billing, smacking seven-shades-of-Sunday out of anyone who crosses his path as he and Barrett made their EC debuts. Highlights include hurling both Rey and Barrett through the pods and then his beatdown of Edge. We also get the standard everybody-hits-a-big-move-on-Big-Show-to-beat-him sequence which seems to happen in every elimination-style match he competes in.

From the moment Show is pinned, we get a rapid fire series of eliminations until only Edge and Rey remain. From there, the two men get just under 10mins to showcase the awesome chemistry they have inside the ring and it’s a joy to watch.

Match #3 was unlikely to live up to the first two bouts, but giving it 5mins made sure it wouldn’t. As far as comedy teams go, Santino & Koslov are usually enjoyable to watch and the interesting dynamic of having Koslov be the “Ricky Morton” and Marella as the hot-tag gives them something unique. Slater and Gabriel, since the switch to Smackdown, have done very little, so taking the tag-titles would at least keep them relevant for another couple of weeks.

Following on from there, the WWE Championship Match between Miz and Lawler was a fantastically heated affair with virtually everyone in attendance wanting the announcer to get a feel-good victory, even if he only held the belt until the following night’s RAW. Rumours had actually started to swirl that WWE management were going to do just that, so while in the back of your mind you knew it wasn’t going to happen, a little bit of your heart hoped it might.

A solid outing with old-school psychology and Lawler showing us that he can still work to a high level, this was much better than it had any right to be, but again didn’t do Miz any favours. As over as he is and as talented on the mic as he is, WWE really dropped the ball with him inside the ring. If he gets another run on top, he needs to be pushed much stronger as an in-ring threat.

Lastly, while not as good as the Smackdown camp, RAW’s Elimination Chamber match was also very good, if not just as predictable in regards to the winner. Again, following the Smackdown lead, no-one is eliminated before all six men are in the match, which makes a nice change. OK, technically, that’s not exactly accurate, but the way it’s done was nicely executed.

Star of the show is CM Punk, but John Morrison puts his Spider-Man-esque abilities to good use around the steel structure (including a genuinely death-defying climb to the centre) and Orton’s face push gains more momentum as he and then rival CM Punk trade blows and pinfalls. The last 5mins were high-octane and the fans inside the arena lapped it up, with Cena setting up a showdown against The Miz at ‘Mania.

Only one extra, but it’s a great one (pun totally intended). From memory, I don’t think WWE have ever done an extra where it chronicled a feud with footage from a number of weeks like it does here. Basically, you get the Rock’s promo when he first appeared on RAW and Cena’s rapped response (which was much better than the usual kiddie-bilge he’s forced to work with).

Grade A stuff all round.

One of the few PPVs to actually garner more buys  than the previous year, Elimination Chamber 2011 was a very enjoyable show, even if none of the winners were all that surprising. I guess it goes to show that just because it’s predictable, doesn’t mean it’s automatically going to be bad.

The two EC matches themselves are the highlights of the night, but Kingston/Alberto was also great and Lawler/Miz was a fantastic example of how good a worker Jerry Lawler is. I genuinely hope his little run with Miz caused people to seek out his back catalogue from Memphis. Only the WWE Tag Team Championship Match is below par, but that lasts 5mins and doesn’t outstay its welcome.

As the last stop before WrestleMania, this needed to put the main-events in place and in that respect it was mission accomplished. I’ve always had a soft spot for this event and feel it’s right to have the Elimination Chamber matches on a set event, which is something I can’t say for Hell in a Cell or TLC.

In a nutshell, this is a very enjoyable event and if you buy the Blu-Ray edition, you get the episodes of RAW and Smackdown from the week before.