Your SO OF COURSE preview of WWE Royal Rumble 2019!

Your SO OF COURSE preview of WWE TLC 2018

In the month that’s followed TLC, ratings have hit rock bottom, and then got people’s elbowed, and then were put in the most horrid-looking sharpshooter imaginable.

Then all the McMahons ran down the ramp and started flailing and promising to pay attention to the fans again…by bringing back the T&A, lots of tag team matches with no storylines, and more (to be wasted) NXT call-ups than you can shake a stick at.

It’s been a difficult month.

Good news though: It’s Royal Rumble time! It’s time again for the three-month stretch where things happen and things matter! Who will main-event WrestleMania?! Who will walk into the show of shows with the WWE and Universal Championships?! How will Vince McMahon screw up the best single-match of the year this year?! Let’s find out! 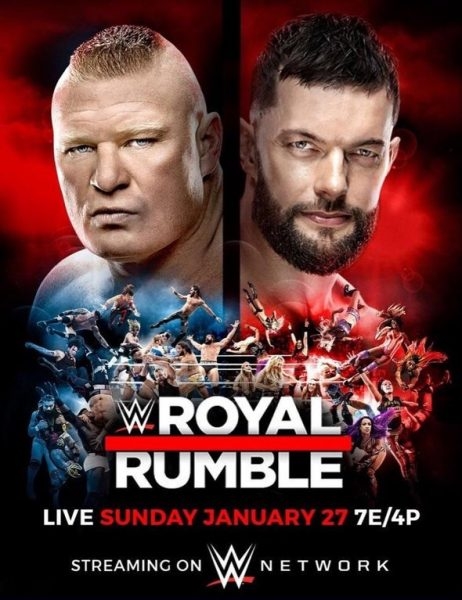 I’m predicting this match opens the show because I refuse to predict anything other than Becky Lynch somehow working the Royal Rumble too and winning the whole thing.

It would be such a Stone Cold thing to do, harkening back to the days when the WWF knew they had a super hot superstar and would go all-in on that superstar. Austin would frequently open Raw, do his thing, disappear for an hour, make some noise backstage, disappear for an hour, then come out to deliver a round of stunners before signing off. He was the hottest act in the company and the show revolved around him. Easy peasy, don’t over think it.

So…start the show with Becky. Use the fact that the crowd will be jacked for the opening and excited to see the most popular performer working in the company today. Of course she’ll lose the championship match. That’s fine; stroke the fans. Delay the big release that will come later in the show. Easy peasy, don’t over think it.

We’ve already broken down who should win for both Rumbles. Check it out here…

Your Annual “Who Should Win?” Royal Rumble analysis!

Cliff’s Notes for the lazy (also the final four):

Drew (in place of Finn Balor who was a late-challenger to the Universal Title).

All I ever want from the Rumble is a well-arranged match. That actually means a lot of things, so let me break it down. I want all the jobbers and old favorites coming back for fun between #’s 5-21, with only serious competitors coming in the final nine (as well as peppered throughout). Also, a New Day/Kofi Kingston save is a given. The obligatory hoss vs hoss showdown is needed, as is the “two guys who’ve not been face to face in a while suddenly see each other” face off. Just space things out, have some fun, and don’t overthink things.

As for the winner…it’s gotta be Seth, right? It feels like a Raw year, with the need to overcompensate for the loss of Roman Reigns. Of course, if John Cena is within three-hundred miles of Phoenix you can’t count him out, but I think what I’ve written is a logical final four, with Miz getting a surprise elimination over Braun, then getting tossed by Drew, who quickly gets throw by Seth for the win (and setting up the WWE Title feud for the Spring).

THE BAR vs THE MIZ & SHANE McMAHON

Of course Bryan is killing it as a vegan millennial heel who blames all the world’s problems on Vince McBabyBoomer. It’s exactly the kind of crap sandwich gimmick that shouldn’t work but does only because the guy doing it commits 100% to it and does it so well you don’t even realize how little it should work but does. And then there’s AJ Styles who, from the moment he stepped foot in the company, has been a golden boy, winning big matches, having long title reigns, and basically carrying SmackDown like Edge back in the olden days.

I expect Daniel Bryan to win because other than Bryan vs Miz I can’t think of a single WWE Title match that would either be fresh, exciting or both. Unless New Day wins and we get that for the next three months. I’d be fine with that.

No chance (in Hell)?

This checks all the boxes. Unlike the SmackDown title scene, Raw’s Universal Championship picture seems much more crystallized: Seth vs Brock makes sense on multiple levels and offers the best chance for Brock to work a fun match at Mania for a change. It’s been since 31 since he had a match that really felt worthy of the attention paid to it.

On the other hand, if Finn were to win the only feud that feels right for it (other than a Lesnar rematch which probably wouldn’t appeal to anyone) would be Drew McIntyre. I’m assuming the men have their Rumble first so if the winner is a Raw superstar it’s likely to offer a pretty clear tell as to which way this match is going.

Becky Lynch is the only choice here. She’s Steve Austin, circa 1998. When someone is as hot as Becky is right now, you go all-in. You don’t 50/50 book it, or take her popularity for granted. You don’t say “well she’s hot enough that she can get in the title match some other way; let someone else who needs it win the Rumble.”

You don’t give the Rumble to someone who needs it. This isn’t King of the Ring.

You give the Rumble to the hottest non-champion main-event act, because that’s who ought to be challenging for the Title anyway. Give Becky the Rumble. Don’t overthink it. She has the momentum, she has the obvious storyline with Ronda. She has the fans on her side. Give her the Rumble, the Stone Cold in 98 push and the Mania main-event victory. Stop trying to water her down to help the not-so-over folks float along.

Anything less, no matter how good it may turn out, will be looked back on in wrestling history as a tremendous waste and a shameful missed opportunity.