Following on from the TLC and Hell in a Cell pay-per-views, this was yet another event named after the match that headlines it. The February PPV, much like the Royal Rumble (an event named after the main match since it began over 20yrs ago), has an advantage over the first two events as it’s been home to the Elimination Chamber matches for the previous two years, meaning the event is already associated with them rather successfully. 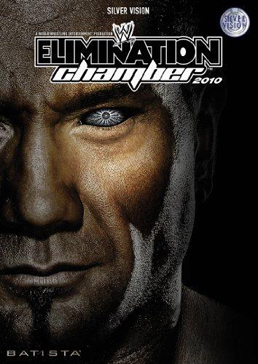 Bookending the PPV with the two EC bouts is, for me, a good idea as it allows the opening one to excite off the bat while giving the latter time to be hyped up, both with the competitors involved and with the “how can they top what they did in the first match” excitement amongst the fans. RAW gets to showcase their wares first and, in a great piece of continuity, Kofi Kingston checks his back before entering the structure (which he should do after being destroyed by Edge last year). The implosion of Legacy is also furthered as both DiBiase and Orton compete for the WWE Championship and the heating-up-by-the-minute rivalry between Triple H and Sheamus also takes another leap forward.

All in all, this is a brilliant opening contest, with a stellar last 5mins, and the rest of the show would have a hard time trying to live up to it. The cheap-as-chips impromptu WWE Championship Match after the EC rubs salt into the wound and, even though it’s a well trodden path in the company, it still caught everyone off guard and really tipped Batista into uber-heel territory.

The following two bouts are skip-worthy (although Drew’s thumb-to-the-eye before hitting his finisher will never get old) and Miz v MVP, while good, isn’t as good as their encounter at Royal Rumble and the fact it’s made backstage on a whim, which is exactly what happened at the Rumble, detracts even more. All of this action leads us into the Smackdown Elimination Chamber and, in my opinion, the Match of the Night.

The infamous moment where Undertaker was engulfed in flames due to a pyro error has been edited out (the shot cuts to Rey Mysterio inside his pod), but they can’t edit out the pissed-off reaction ‘Taker has or the fact his skin is red raw. Moving on from burning flesh, another piece of continuity is in effect as CM Punk continues to cut promos during his entrance, preaching to anyone who will listen. The fact this verbal spouting keeps going during the match as well is simply awesome (Rorschach quote included).

As soon as the bell rings, the fans are into their second Chamber of the night and the action flows thick and fast. The eliminations themselves are well paced and the last 10-odd minutes are a frantic blast of energy as the last entrants pull out all the stops on the way to an absolutely astounding finishing sequence. A fantastic end to a great wrestling show.

Three extras, with the first two being alright and good respectively, but the third addition, a hype video for the impending Undertaker v HBK at WrestleMania XXVI, is amazing. The fact that the WWE production staff actually bettered it with the Placebo version is, quite frankly, astounding.

No Way Out was always one of my favourites on the PPV calendar and even though there’s been a name change (except in Germany, where elimination chambers take on an entirely different meaning), the event itself remains constant. The undercard is a mixed bag, but the two main events are worthy of the price on their own.

RAW’s opener is eclipsed (only just) by its Smackdown counterpart, but both matches are fantastic and don’t detract from the other, even though their essentially the same bout with different people. As for the extras, they’re nothing to really get excited about, but they’re also a little above the usual add-ons were used to receiving on WWE DVDs/

I recommend this on the strength of the two championship bouts, with Miz v MVP as a nice bonus bout to tide you through the other two undercard matches, especially as you can pick this up for around £11.