The Curse of the Royal Rumble IV: How Kevin Nash ruined everything

Well, that was fun while it lasted.

For the last several years, we’ve documented the ways in which the 14th entrant to each Royal Rumble is cursed. Then came 2014. And then came Kevin Nash. And then he didn’t do much else.

Was that the curse in action? Is it now so powerful that it simply wrote Kevin Nash’s entire wrestling career out of existence? No. It’s much worse than that. When talking about the number 14, we’ve failed to mention there is an even greater, even more powerful, even more destructive curse in professional wrestling, and it’s name… is Kevin Nash. 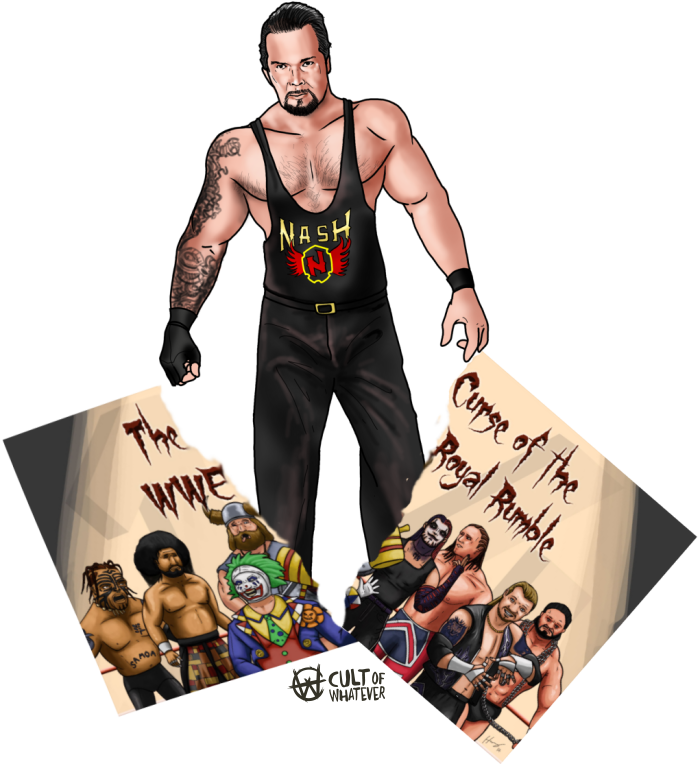 The number 14 didn’t destroy Kevin Nash, Kevin Nash destroyed the number 14, and, in commemoration, we’ll use this opportunity to take a look back on everything else the curse of Kevin Nash has irreparably ruined.

The Curtain Call: The Entire Point of Pro-Wrestling

The year is 1996 and, for all intents and purposes, kayfabe still basically exists. We’re out of the area of angry old ladies in the front row and un-patriotic heels getting shot, but we’re also still pre-Vince Russo. In short, people were aware the Wizard of Oz probably wasn’t a real wizard, but they hadn’t entirely figured out he was just some old guy in a back room either.

By the spring on 1996, Nash and Hall were already destined for WCW, the first seeds of what would eventually become the NWO (more on that later), whilst their good friends and fellow psychopaths Triple H and Shawn Michaels were going to be remaining in the WWF. At a non-televised WWE event in New York City, Triple H, as a heel, wrestled Scott Hall, as a babyface, whilst, later on the card, babyface Shawn Michaels wrestled against heel Kevin Nash. So far so good, and the it was time to end the show; the curtain call.

As soon as the Michaels vs. Nash match ended, Scott Hall entered the ring and hugged Michaels goodbye. It was off script, but, whatever, a babyface saying goodbye to a babyface isn’t much of an issue. Then, however, Triple H came out, and hugged Hall, the man he’d just wrestled earlier that night, and his supposed enemy. Then the icing on the cake; Kevin Nash joined in. Two babyfaces, two heels, two on-going feuds, all hugging each other, in public, at an official event, in the middle of a WWF ring, in Madison Square Garden.

As could probably have been expected, WWE management wasn’t exactly pleased. At the time, the company had a rule banning babyfaces and heels from interacting socially in public, out of the fear that it would expose the business as “fake” and damage the effectiveness of feuds and storylines. Things went from bad to worse when Vince McMahon was informed that a pair of fans had managed to sneak camcorders into the otherwise un-televised event, and what became known variously as “the curtain call” or “the MSG incident” had not only been recorded, but was now being shown to the public (eventually, this tape was bought by the WWF itself and is part of their extensive video library).

With Michaels as one of the WWF’s biggest draws, it was up to Triple H to receive the brunt of the punishment, which including a change of plans that eventually resulted in Steve Austin’s career-making victory in the 1996 King of the Ring tournament (Triple H was originally planned to be the tournament winner, but was written out of his victory as punishment for the MSG incident).

Hall and Nash, however, went entirely without punishment, as they almost immediately left the WWF for arch-rivals WCW, bringing the curse of Kevin Nash with them.

Goldberg: WCW’s Only Ever Genuine Achievement

Fast forward two years to 1998, specifically December 27th, 1998, in Washington D.C. at the Starrcade WCW pay-per-view. After eleven minutes and twenty seconds, Kevin Nash has just won the WCW World Heavyweight Championship to end the show. Little could anyone have know at the time, but WCW would never recover.

To understand exactly why, we need to go back just over one year, to September 1997, and the televised debut of Bill Goldberg. If WCW every truly created anything, it was Bill Goldberg. Hogan, Luger, Savage, Piper, even the NWO were WWF inventions, Sting and Flair owed their careers to the NWA, but Goldberg was WCW through and through. Originally from Atlanta, trained from scratch in WCW’s own training facility, and having never wrestled anywhere else, Goldberg was WCW’s poster boy, it’s Steve Austin, it’s saviour, and the only real glimmer of hope that WCW could possibly outlive the careers of it’s ever-ageing roster of main event talent, all of whom were stars from the early 90s, if not the 1980s, who had been in the exact same position for years without a hint of evolution, change or freshness.

But, in Goldberg, WCW had something young, exciting and self-made, and the company rallied behind their new star who was pushed into an eventually ridiculous and almost entirely made-up 173 match winning streak that lasted from September 22, 1997 until, you guessed it, December 27th, 1998.

As part of his winning streak, Goldberg had won the US Title in April, and then the World Heavyweight Title, from none other than Hulk Hogan, in July. At the same time, however, behind the scenes, WCW’s rather liberal contract negotiation policy was coming back to haunt them. As a way of snatching up disgruntled WWF talent, the company had offered several rather ludicrously generous amounts of personal power and autonomy to stars like Hulk Hogan, Scott Hall and, of course, Kevin Nash. This had already manifested itself in bizarre incidents like putting pressure on referees to change the endings of matches without telling anyone else involved, including the writers and booking team (like the notorious and infuriating finish to, ironically, Starrcade 1997).

The exact power structure of WCW is a hazy one, like concentration camp guards all claiming to have only been following orders. Exactly when Kevin Nash’s backstage power in WCW reached it’s peak will probably never be confirmed, but, many will point to Starrcade 1998 as perhaps it’s most public display. As far as the facts go, it’s generally accepted that Kevin Nash did everything in his power to make sure he was the man who first defeated Bill Goldberg. Exactly why he did that is up for debate. According to Nash himself, much of Goldberg’s hype and popularity was a farce created by WCW using fake audience dubs and piped in chants, and Kevin Nash was just as, if not more, popular, particularly in the north-eastern territories most commonly associated with the WWF. Others, including former WCW booker Kevin Sullivan, believe it was simply a way of stroking Nash’s ego and assuring himself a bigger part in wrestlings history books. The third, and perhaps most cynical (and, thus, most likely) scenario, is that the destruction of Goldberg by an older, established guy like Kevin Nash was designed specifically to stop his rising popularity and, as such, stop any threat of him destabilising Nash’s world of guaranteed contracts and creative control. If WCW started creating stars of it’s own, like the WWF was at the time, why would they need to keep giving old WWF veterans like Nash and his friends so much power and money to stick around?

Thankfully for (and because of) Kevin Nash, that question was never answered. Bill Goldberg was defeated, Kevin Nash was champion, the streak was over, and WCW had two and a half years left to live.

But the curse wasn’t done just yet.

WCW: Competitiveness in the Pro-Wrestling Industry

Around February 1999, WCW made one of the most bizarre decisions it ever made (which is a competitive field for a company like WCW) and made Kevin Nash the head of their creative team. The previous head, Eric Bischoff, who had officially booked Nash’s title victory at Starrcade, effectively walked out on the company to go to Europe with his family, leaving Nash in full control.

Unfortunately, Nash’s time in charge is particularly vague in terms of what he did and didn’t do, mostly because Nash’s promotion did nothing to clear up the murkiness of exactly who was in charge of what in WCW. Roughly speaking, Nash lasted from Bischoff’s departure in February 1999, to Vince Russo’s arrival in October 1999. These dates, whilst unconfirmed, would suggest that Nash was responsible for at least okay-ing a performance by the band KISS on an August episode of Nitro which was, according to Dean Malenko, the least-watched episode of WCW Nitro ever.

Nash’s tenure as booker also involved the coining of the notorious term “vanilla midgets”, Nash’s label for wrestlers he considered to be too small and too boring to ever succeed. Among the vanilla midgets were the likes of Eddie Guerrero, Lance Storm, Chris Benoit, Dean Malenko, Raven and Chris Jericho, with the latter two both eventually leaving WCW under Nash’s leadership, and immediately joining the WWF.

But perhaps Kevin Nash’s most well known and controversial nail in WCW’s coffin came, amazingly, before he was “given the book” by Eric Bischoff.

All together now; The Fingerpoke of Doom.

The story’s so well known that it’s barely worth repeating, but, just as catch-up crash-course, on the January 4th, 1999 episode of WCW Nitro, in Atlanta, Georgia, babyface Kevin Nash defended the WCW World Heavyweight Championship against heel Hulk Hogan, with each man representing rival splinter groups of what had once been the NWO. When the match started, Hogan poked Nash in the chest, Nash threw himself onto his back, Hogan made the pin, Hogan and Nash hugged and laughed, the NWO reformed, and, in one finger poke, the Monday Night Wars were over. WCW had lost.

In his book “WrestleCrap”, RD Reynolds cited the finger poke of doom as the beginning of WCW’s decline into oblivion in the minds of fans. In his book “The Death of WCW”, Bryan Alvarez called in the most important single event that eventually lead to WCW’s collapse. WWE themselves called in the most “scandalous title change of all time”. Even the New York Daily News called it the “beginning of the end of WCW”.

As ever with WCW, people have been quick to jump ship. Kevin Nash has always protested his influence, accusing others, including Bill Goldberg, of spreading the rumour that he was involved the planning the match. On the other side, however, Goldberg, Reynolds and Alvarez have accused the match of being almost entirely the work of Nash and Hogan as part of an ongoing “plot” which had begun with Nash winning the title in December to place both of them back at the top of the WCW main event hierarchy in the fans eyes.

Whoever’s fault it was, the ball was rolling, the decline was unstoppable. WCW was dead. The curse of Kevin Nash, however, wasn’t…