Is GLASS a form of self-therapy by its infamous director? (full review)

It should go without saying that an M. Night Shyamalan movie discussion has spoilers. 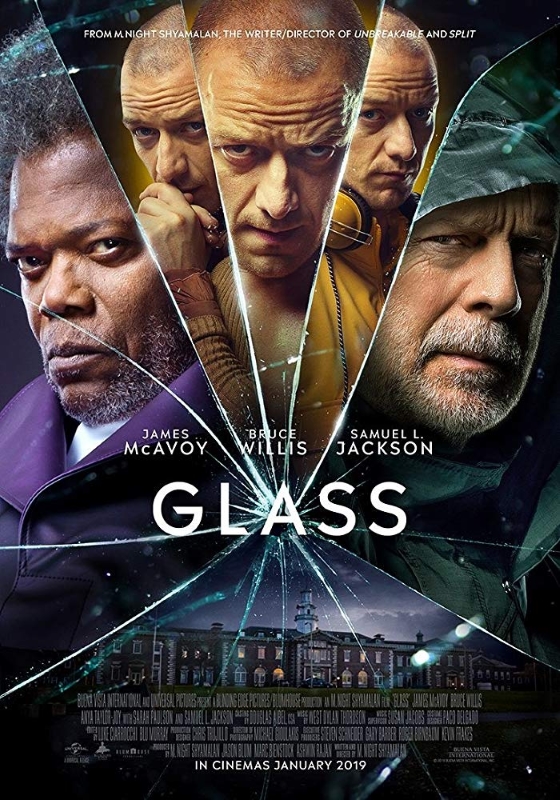 A REFRESHER ON HIS CAREER

What more can be said about M. Night Shyamalan. His career is one of the most scrutinized and fascinating in modern history.

Here’s a guy who blew everyone away with The Sixth Sense. The movie, and its now-legendary twist-ending has become a victim of its own fame, but in the moment it was hailed as a revelation for the horror/suspense genre. It was nominated for multiple Academy Awards. The good ones, too: Best Picture, Director, original screenplay, supporting actor/actress. It wasn’t the first ghost story with a twist ending, nor the first horror movie with a child in the lead. What set the movie apart was how perfectly the entire production was crafted. Acting, cinematography, the tightness of the script and the perfect balance between terror and tenderness all worked together to allow the movie to rise above the myriad of horror films that pop up every Autumn.

From there he made Unbreakable. The movie was probably a little too out there for a very creative director who had suddenly become a mainstream name. And make no mistake, Shyamalan’s distinctive name was the real top-billing for the movie. As with Sixth Sense, the film was beautifully shot, had another great script and some good acting. M. Night looked like he would be a major player in Hollywood for years to come, even though Unbreakable wasn’t a hit (initially) the way Sixth Sense was.

Signs was a much more “commercial” movie than Unbreakable. By that I mean its plot was easier to condense into a 30 second TV commercial. It made more money than Unbreakable and was initially better-received, but over time the perception of it has suffered, while Unbreakable has been hailed as perhaps his best movie. Either way, Signs was a hit and gave M Night the cache to work without too much micro-managing by Touchstone Pictures or Hollywood Studios (the Disney-owned companies that produced his first three hit films).

The result of his creative blank cheque was The Village, the movie with which M. Night solidified himself (intentionally or not) as “that director with the twist-endings to his movie). What’s interesting about that label is, Unbreakable really didn’t have a “twist” ending. It had a grand reveal. It had a plot-turning moment (which makes sense, considering it was originally conceived as the first part of a trilogy, with the director intending to follow it up much sooner than he ended up doing).

The Sixth Sense had a real, The Usual Suspects sort of twist ending. Signs had a very distinctive ending too, but I wouldn’t call it a “twist” so much as “the climax of long-running Rube-Goldberg-like plot machinations). The ending to Signs wasn’t a twist, it was a contrived pay off to several smaller and seemingly irrelevant plot contrivances. Signs’ ending was brilliantly shot but made no sense (unless you subscribe to the theory that the “aliens” were actually demons, and the water was “holy water” which is why the water in the priest’s house killed them but not all the other water that’s all over the planet…if that’s your theory then forget what I said, the ending is great).

Naturally, the casual audience ate it up while over time it became a drag on the picture. By the time hype was being built up for The Village everyone assumed there would be some kind of a “weird” ending, be it a twist or something unorthodox. Rather than go against the grain and make the actual twist be that there is no twist, Shyamalan gave the people what they expected. And it sucked. I remember people laughing derisively at it, during the finale and walking to their cars. His movie was already not great, but the ending turned it—and his career—into a joke.

And things only went further downhill.

One dud after another followed The Village. Lady in the Water turned him from controversial and divisive to mocked by everyone but his diehard fans. The Happening cost him the diehard fans. The Last Airbender ruined any goodwill he might’ve achieved from the next generation of moviegoers. By the time he made After Earth, his name had to be stripped from all advertising, in an attempt to avoid scaring ticket-buyers away (it didn’t work; no one went to see After Earth…you probably forget there even is a movie called After Earth).

The Visit gave him a modest hit, however, then Split made everyone look around and say “Maybe he doesn’t suck anymore?”

The ending to Split revealed the film took place in the same universe as Unbreakable and that the follow-up would bring back Samuel L. Jackson’s Mr. Glass and Bruce Willis’ David Dunn for a surprise third film in the suddenly-a-trilogy trilogy.

For the first time since The Village people were actively anticipating an MNS movie. For the first time in fifteen years, one of his movies had buzz, momentum, and—most terrifyingly—expectations. Now that it’s out does GLASS live up to the hype? Does it bring a satisfactory conclusion to the two movies that came before it? Does it handle the unusual circumstances that come with being a sequel to a film that released almost twenty years ago?

I have no idea; the movie doesn’t even try.

I’m not entirely convinced this movie is the actual sequel to Unbreakable and Split. I actually kind of think this movie is just a cinematic expression of a cathartic therapy session and maybe the real sequel is still coming.

I think…bear with me…that GLASS is really about how M Night started hot, stumbled, and then had to listen to everyone tell him “your first few movies were flukes, easily explained-away by ‘this’ or ‘that’ bit of outside circumstances” and that “your career is really more The Happening than The Sixth Sense.” He didn’t believe that, of course. He persisted and “proved them wrong” with The Visit, Split, and now GLASS.

Nevermind the fact his first three movies are far-and-away superior to his most recent three, but whatever; I’m rolling.

So he makes this movie that’s about some superheroes/villains, two-thirds of whom did some amazing things twenty years ago, but now they’re trapped in a padded room, being told by a psychologist that all their so-called powers are just flukes, easily explained-away by ‘this’ or ‘that’ bit of outside circumstances.” 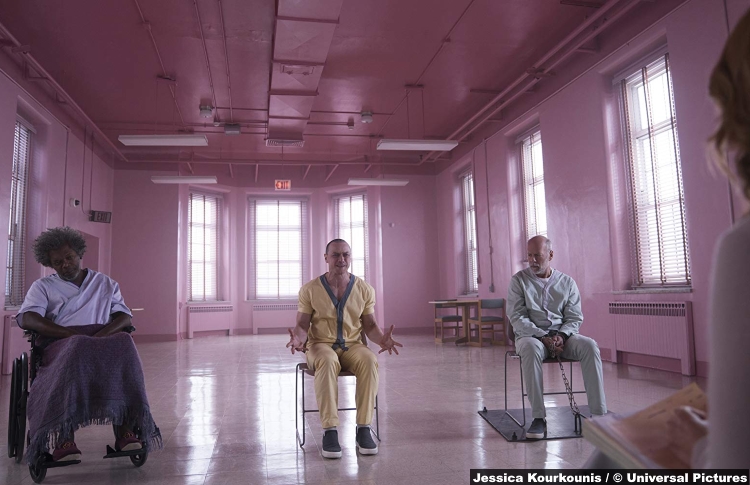 And the Dr. makes some convincing arguments: Mr. Glass actually has no super powers but is only really smart; that one’s easy. David is strong but he’s only deluded himself into thinking he’s super-strong, and his ability to sense people and learn their motives is really just a heightened sense of intuition. As for Kevin (the Beast and his many other alter-egos), he’s really just an ordinary man suffering from split-personality, and the feats of strength by the beast (climbing walls, bending iron bars) are the no crazier than watching mountain climbers or seeing “strong men” bending very old beams of metal.

The movie explores this idea at length, putting all three of our main characters through a period of self-doubt before, in the climax, revealing that they are in fact super. They are special. They have the abilities they always knew they had and the Dr. who doubted them is really part of a shadowy organization bent on keeping special people from embracing their real superpowers. 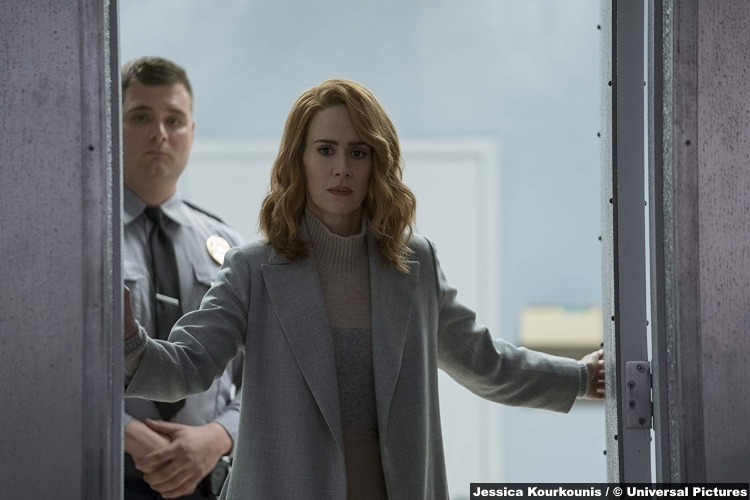 On that note, I think it’s interesting that Mr. Glass says, in the film’s climax that “this” (the movie, to the audience) isn’t a climax (the third movie of three) but an origin story. That’s strange to me, considering how MNS repeatedly called Unbreakable an origin story, and then revealed that Split was the penultimate chapter, setting up the final conflict in the next film, GLASS. But now GLASS is an origin story? What gives?

So, in keeping with my theory, I think GLASS is a cinematic representation of MNS’ career from The Sixth Sense to, let’s say Lady in the Water (the beginning of his four-film rock bottom phase). Act one features a lot of looking back on past events (representing the highs of his early career), act two introduces the doubts that creep in after the Dr. starts questioning them (just as The Village made everyone stop and reconsider if MNS actually was all that and a bag of chips), and act three features the big showdown where you expect the hero to prevail but instead, though they have actual powers, they are all undone by one random thing or another: The Beast turns on and kills Glass, a sniper takes out the Beast when he’s vulnerable, and David is drowned in the WATER by a LADY (this all represents MNS’ rock-bottom period, where everyone wrote him off, said his career was dead, and moved on without him). The trio are killed by a shadow organization, not because they’re NOT special, but because they ARE special.

But what’s the twist? There’s (almost) always a twist in his movies.

Here the twist is the Shadow Organization that tried to suppress knowledge of superheroes failed to account for Mr. Glass’ intellect. He uploaded and released footage of the trio doing extraordinary things, revealing themselves to the world, and giving them their big comeback. That’s not much of a twist, unless you consider it in the context of MNS’ self-therapy.

GLASS is M. Night’s way of saying “I’m great. I’m special. And the shadowy organization of critics who doubted me and seemingly killed me, failed because I can’t be stopped.” 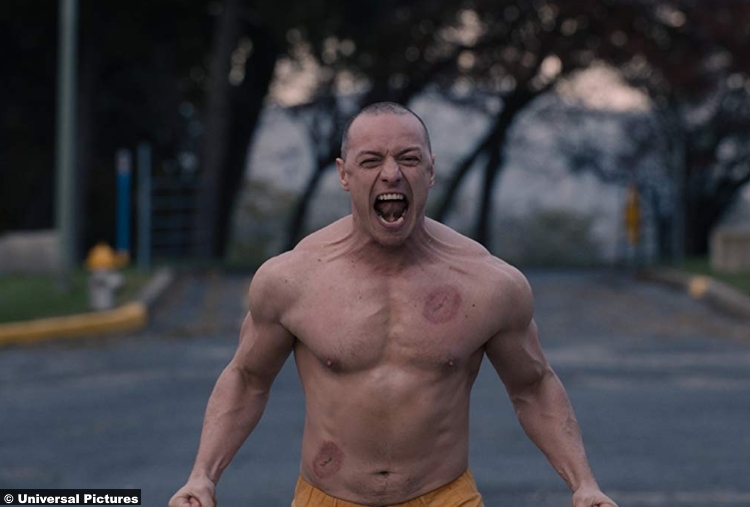 ALRIGHT…OKAY…BUT HOW WAS THE ACTUAL MOVIE?