With the biggest event of the summer simmering slowly with its lack of matches and questionable build-up, it’s easy to forget that Summerslam used to be one of the most anticipated shows in the wrestling calendar.

To that end, it’s worth looking back at some of the memorable moments that have made the summer spectacular so revered by fans all over the world. Rather than try to place these in any ranking, since it’s too subjective a topic, I’m just going to review them in order of when they happened, starting with… 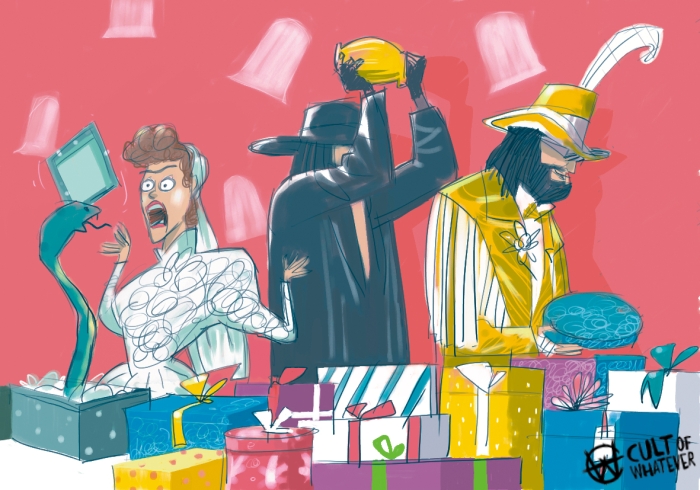 Wrestling weddings are almost always, with few exceptions, entertaining affairs that end with something going horribly wrong. One of the first weddings that laid the foundation for the Teddy Long and Edge weddings of latter years came in 1991 when Randy Savage married his real-life wife Miss Elizabeth. The highlight came during the reception, which chronicled the cake cutting, first dance and opening of presents, one of which just so happened to be a snake. With everyone screaming for their lives, The Undertaker burst in and hit Savage in the head with an urn, whilst Jake threatened Elizabeth with the snake.

Doing that kind of stunt today would just lead to a restraining order. Believe me, I’ve tried. Then again, watching the video back, I notice Jake’s snake had two eyes. Maybe that’s where I went wrong. 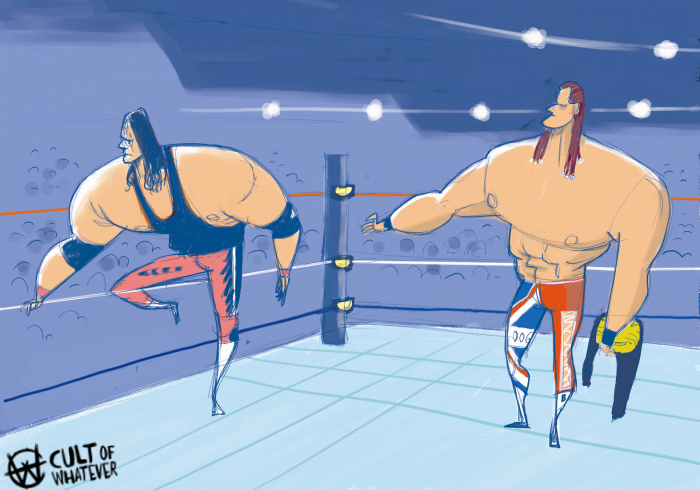 The UK rarely gets big wrestling events beyond the occasional Raw and SmackDown taping, but 1992 saw WWE bring its second-biggest pay-per-view of the year across the shores, filling the famous Wembley Stadium to its brim and showcasing its talent in front of one of the largest audiences in wrestling history.

Although the fans were excited to see The Ultimate Warrior and the Legion of Doom, London lit up when our own Davey Boy Smith – accompanied by boxing great Lennox Lewis – defeated his brother-in-law Bret ‘The Hitman’ Hart to win the Intercontinental Championship in a classic contest with, of all things, a sunset flip reversal.

The next time Smith would compete for a title in the UK on PPV would be five years later, where he was defeated by Shawn Michaels for the then-coveted European title. The match was dedicated to his cancer-stricken sister, who died thereafter, shortly followed by the Bulldog’s career, followed by the Bulldog himself. We shouldn’t blame Shawn Michaels for that, but it’s more fun to do so. 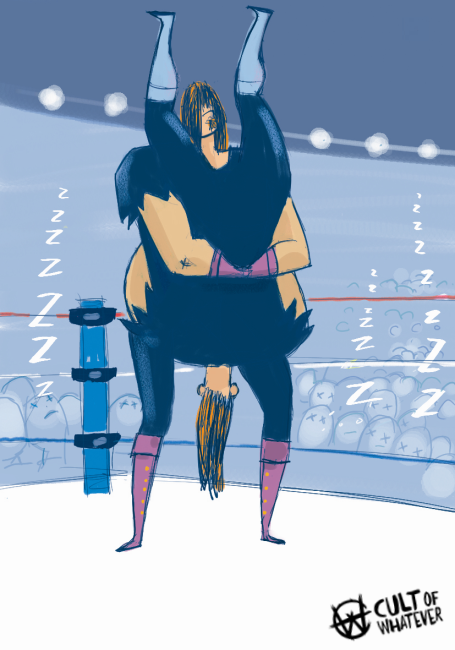 After Yokozuna locked The Undertaker in a casket at the Royal Rumble, Ted Dibiase began parading around with a new Undertaker, played by Brian Lee (later Chainz of the Disciples of Apocalypse). Leslie Nielson of Naked Gun fame was sent on a mission to find the real phenom, and eventually, his search led him to Summerslam, which set up the big meeting between Taker and the Faker.

Sadly, the match was garbage. After boring the crowd for what seemed like an eternity, the real Undertaker finally put everyone out of their misery by Tombstone piledriving the imposter, locking him inside a casket and wheeling it away, never for Lee to be seen again… until three years later, when he returned with Crush and two Nazi-supporters to fight against some Mexican midgets. He probably should have just stayed in the casket, really.

Paul Bearer turns his back on The Undertaker (WWE SummerSlam 1996) 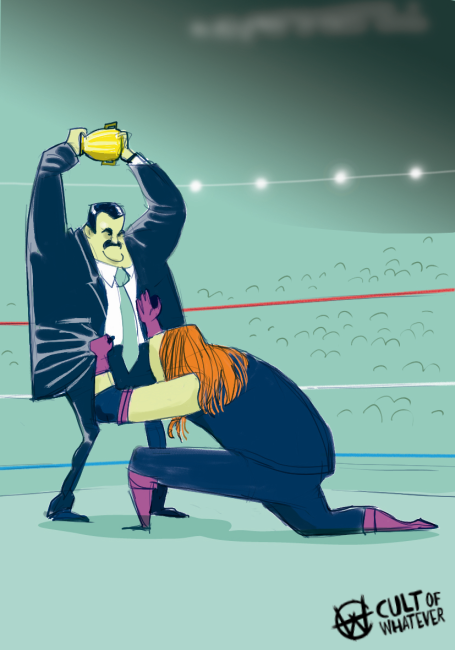 Long before Mick Foley became a best-selling sack of self-important ego and flatulence, he was actually a pretty great worker. Not only was he willing to sacrifice his body, but he also made other wrestlers look like a million bucks. Never was that more apparent than in his series of matches, as Mankind, with The Undertaker. Used to slow-paced snoozefests with lumbering giants, Taker was allowed to up his pace and show that he was in fact capable of some really great matches.

The Boiler Room Brawl from Summerslam 1996 will go down as one of their best showdowns. The aim was to escape the boiler room beneath the arena, make their way to the ring and collect the urn from The Undertaker’s manager, Paul Bearer. You’d think that Taker would have had the advantage, but alas it was not to be; as the dead man motioned for the urn, Bearer turned his back on his charge, and gave the urn to Mankind. The match ended with Bearer hitting The Undertaker with the urn, and kicked off a long-standing feud between the two, which led to the debut of Kane over a year later. 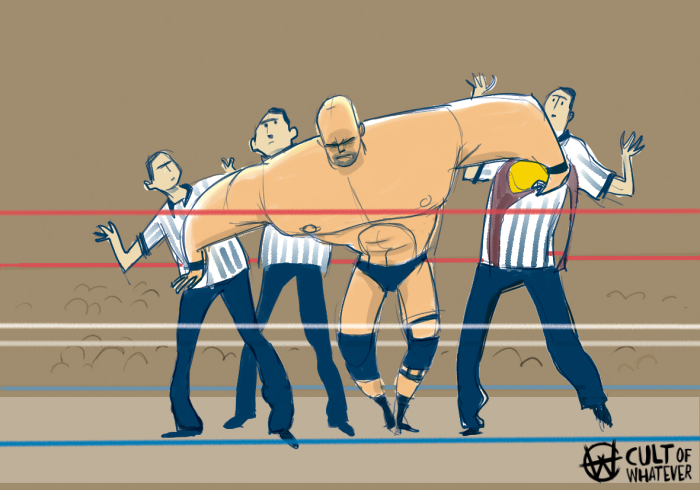 An otherwise uneventful Summerslam in 1997 took a turn for the better when Owen Hart defended the Intercontinental title against Steve Austin with the stipulation that Stone Cold would kiss Hart’s ass should he fail to win the title.

As the match gathered pace, Owen reversed a Tombstone Piledriver attempt into one of his own and turned it into a modified Tombstone whereby he dropped as you would with a normal Piledriver. Unfortunately, Austin was a little too low and his neck broke instantly. Unable to move, and seemingly unwilling to come up with a different finish on the fly, the conclusion was rushed forward; Owen waited for Austin to drag himself over towards him, fell backwards, and then kicked his feet around like an upturned turtle as the ref counted to three. Austin had won the title, but had to be carried out by officials. He later vacated the belt but won it back at Survivor Series, and went on to become the biggest name in professional wrestling. Hart went on to become a nugget. And then he died. 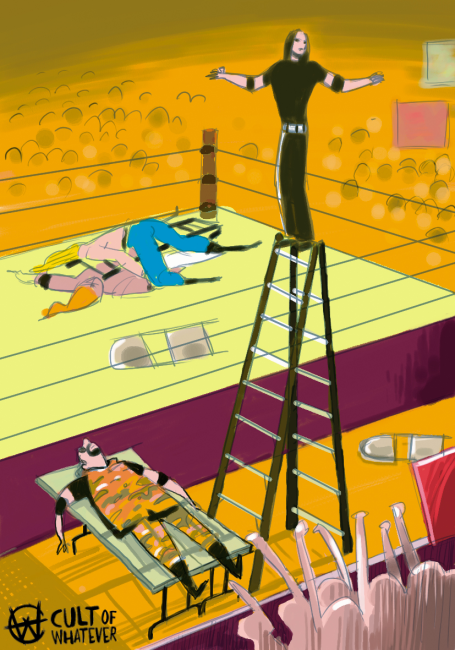 Some of you may be too young to know what I’m talking about, but WWE used to be inundated with something called “tag-teams”. This is where two wrestlers work together to fight two other wrestlers, sometimes with a tag team title on the line.

Three of the biggest tag teams at the turn of the millennium were Edge and Christian, Bubba Ray and D-von Dudley, and Matt and Jeff Hardy. Each had their own little gimmick to go along with – E&C had chairs to sit on, the Dudleys had tables to eat from, and the Hardys used ladders to try and spot local meth dealers – and it was eventually decided to put these elements together to form a brand new contest: the TLC match.

As you’d expect, the match was a complete success. All six men put their lives at risk to put over the brutality of the weapons, and the match still holds up today as one of the greatest ladder-based matches in wrestling history. Jeff Hardy, in particular, shone as the wrestler most willing to dive from the highest ladder possible through as many tables as God would allow. In the end, it was Edge and Christian who emerged victorious, and history would repeat itself in the rematch at Wrestlemania X7 the following year. 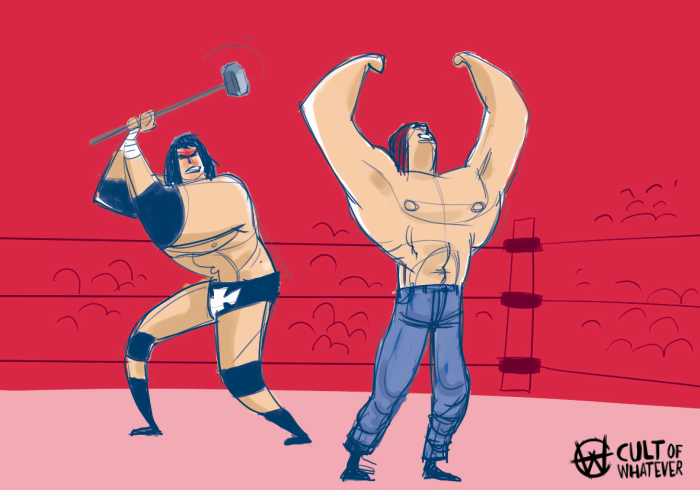 When Shawn Michaels retired in 1998, everyone expected his career to be over. His back was destroyed and his drug problems were spiralling out of control. That was until 2002, when the Heartbreak Kid decided to return for one more match against his best friend, Kevin Nash. Wait, no, I meant Scott Hall. No, sorry, I meant The 123 Kid.

Actually, I meant that lowly Clique bag carrier, Triple H. No longer the baggage handler for the stars, Hunter was now the top dog and Michaels returned to face him one on one for the first time since their pre-Fingerpoke of Doom mockery on Raw over the European title in 1997. Unlike that match, this one was full of action and emotion, ending with a clean Michaels win to solidify his place back in the company. Post-match, Hunter turned on his friend, hitting him in the back with a sledgehammer and kicking off a feud that’d draw in the World heavyweight title and become the start of an incredible career resurrection for HBK. 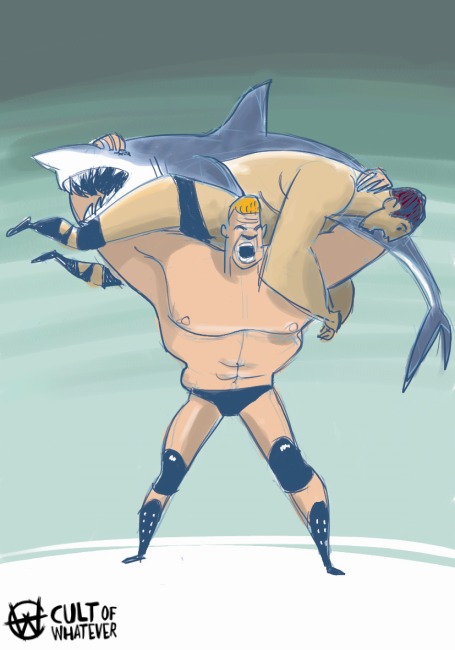 Brock Lesnar is a former UFC heavyweight champion, but was carrying the undisputed WWE crown long before. In 2002, after winning the King of the Ring, Lesnar was given a title shot against The Rock and duly delivered the goods. Even the audience in attendance rooted for the challenger, disillusioned by the rising Hollywood fame of the champion and wanting to see a title change. Sure enough, Lesnar picked Rocky up for the F5, slammed him to the mat and won his first of many heavyweight titles to come. Could he top this first glorious moment, though? 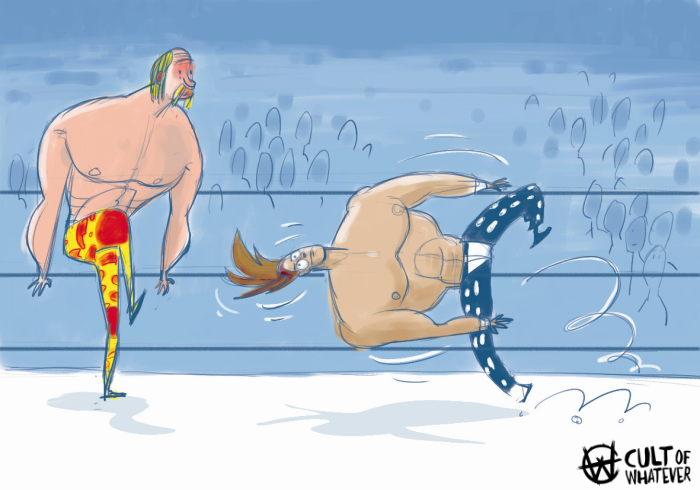 Turning the hype into a one-man show, Michaels dusted off the old heel routine and provided a masterclass in turning audiences against you with one flick of the switch and a couple of perfectly timed “brother brother” catchphrases. Come match time, the crowd was super-hot for the Hulkster but watched with amazement as HBK bounced around the ring, taking every punch, kick and bandana throw as if a bomb had exploded at his feet. At certain points, it looked like he was starting to take the proverbial mick, jumping across the ring and to the floor if Hulk even stared at him. But at other times, he made the immortal immobile look like a superhero. Once the match ended in typical Hogan victory, all eyes were firmly on Michaels. The showstopper had stolen the show, annoyed a couple of Hogan fans, and probably even Hogan himself, and made a mockery of the whole situation. But the match was memorable, the buyrate was strong, the audience was electric, and Michaels had made sure that it was he, and not Hogan, who was given all of the credit for it. 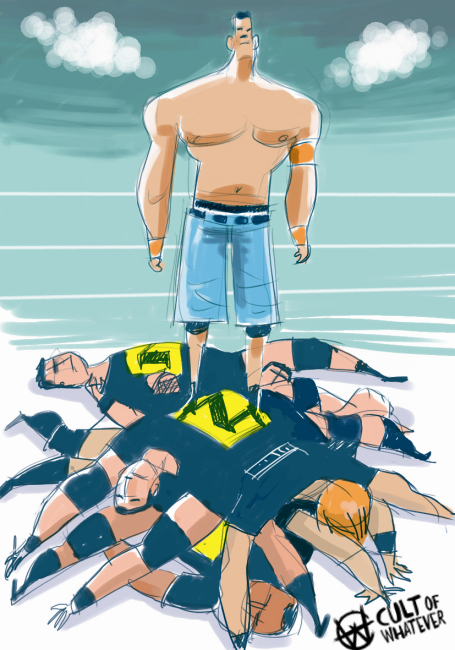 What do you get if you kick start a super-hot angle with a group of disenfranchised heels who want to make a name for themselves, add a flurry of interruptions and attacks to make them look like killers, and put them in front of John Cena? The answer was decisive: the utter destruction of the hottest act of the year in one single match, at the hands of Superman himself.

I’m not Cena hater by any means. In fact, I’m the polar opposite. However, WWE took a stable that was picking up steam and encouraging growing interest in the product, and destroyed them one by one. Where the rumours before the match focused on which Team WWE member would turn on their teammates, or how Nexus leader Wade Barrett would manage to defeat Cena and co, the result was flat and outright disappointing. With two members of Nexus left against the lone Cena, both men were disposed of in rapid succession. No fight, no close call, just two finishers and Cena’s hand raised in victory as Nexus was vanquished. What should have been the turnaround for the product and a long-awaited surge of new stars being created turned into a mercy killing without any mercy.

Nexus never fully recovered from that match. Eventually, the stable split across Raw and SmackDown. The SmackDown collective, The Corre, disbanded relatively quickly. Nexus was taken over by CM Punk but is no longer active. And John Cena? Still WWE champion, still in the main event, and still the Superman we all know and love. The more things change, the more they’ll forever stay the same.

Are there any other Summerslam moments that you think should have been listed? Share them in the comments section below.