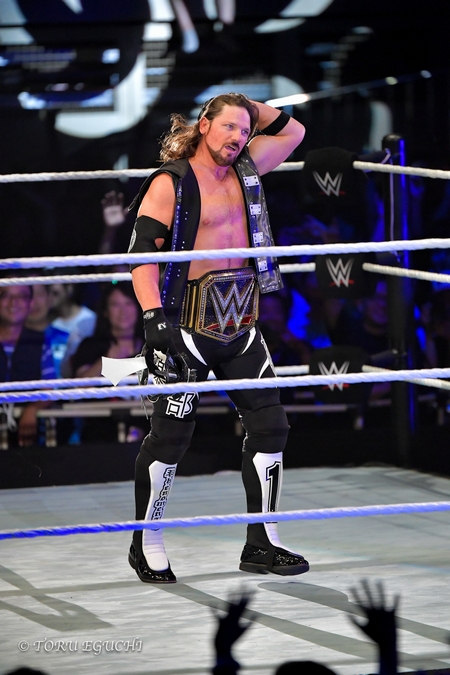 Following another vicious, calculated attack on Jeff Hardy last week, SmackDown LIVE would kick off with “The Viper” Randy Orton. After showing his attack on Jeff Hardy, Orton says that he made a “vow” to dismantle every Superstar that the fans put up on a “pedestal” and he made a vow to “alter” their lives and careers, saying that he is going to be “so violent”, they will want to “change the channel”. Orton continues, saying the fans “believe” in superheroes and they believe in “hope” before saying that Jeff Hardy isn’t going to come out there because he “erased the enigma”. Orton then says that Jeff is “searching for his identity” before saying that he will “erase” every Superstar that the fans respect. Orton then says that he doesn’t get the “respect” that he deserves from the fans or anyone in the back. Orton then reminds the fans of all of his career accomplishments, saying that, sometimes in life, you have to “make choices” and he will erase every Superstar that the fans “choose to believe in”, starting with Jeff Hardy. Orton continues, saying that this is on each and every one of the fans before saying that they can call him what they want but the only letters that matter are “R-K-O”.

With SmackDown Women’s Champion Carmella a guest on commentary, her two SummerSlam opponents, Becky Lynch & Charlotte Flair, would face The IIconics in the opening match of the night. In the end, it was Charlotte Flair tagging herself into the match before locking in the Figure-Eight on Peyton Royce, making Peyton tap out to pick up the win for herself and Becky Lynch. After the match, Becky and Charlotte would stare Carmella down as the SmackDown Women’s Champion stands tall on the announce table, holding the title belt high.

After Samoa Joe delivered a personal message to AJ Styles last week, calling AJ a “failure” as a father, WWE Champion AJ Styles would appear on SmackDown LIVE to respond to his SummerSlam opponent. AJ says that, as a parent, you make “sacrifices” and that is what he does as a father and as a “real man”, saying that he is away from home for over 200 days a year. Styles then says that he celebrated eighteen years with his wife on August 5, saying that his wife is basically a single parent because he can’t be there. AJ continues, saying that he “wants to be there” for his family but that’s what “pisses” him off the most is that Samoa Joe knows his wife. The WWE Champion then says that Joe threw away years of friendship when he mentioned AJ’s family before telling Joe that he is not walking out of SummerSlam as the WWE Champion, commenting that Joe might not even walk out of SummerSlam at all. Samoa Joe is then shown laughing backstage as a confident and determined AJ Styles stands tall in the ring.

After accepting Aiden English’s apology backstage, but not letting Aiden come out to ringside, Rusev would be in the corner of his wife, Lana, as Lana goes one-on-one with Zelina Vega, with Andrade “Cien” Almas in her corner, in a rematch from last week. During the match, Andrade “Cien” Almas would get on the ring apron but Rusev would pull Almas off of the ring apron, sending Andrade into the barricade. However, Zelina Vega would take her focus off of the match to kick Rusev in the back of the head, allowing Almas to send Rusev into the ring post. Lana then drops Zelina with a kick to the head before Lana heads to the top rope but this is when Aiden English would rush out, tackling Andrade into the ropes, inadvertently making Lana fall off of the top rope. Zelina then takes advantage with the double knees to Lana in the corner, pinning Lana to pick up the win. After the match, Rusev would check on Lana while staring daggers at Aiden English.

On a night where they would find out who they will be facing at SummerSlam, SmackDown Tag Team Champions The Bludgeon Brothers would face local competitors Pablo Koslov, Julio Rivera, & Ileki Lee, collectively known as 3SK, in a 3-on-2 Handicap Match. At the end of a dominant performance, it was The Bludgeon Brothers hitting Pablo Koslov with the Doomsday Device as Harper pins Koslov for the win.

Then it was time for the main event as, in the Finals of a four-team tournament to determine who will face The Bludgeon Brothers for the SmackDown Tag Team Titles at SummerSlam, The New Day’s Big E & Kofi Kingston, with Xavier Woods in their corner, would face Cesaro & Sheamus with the winners earning the title match at SummerSlam. At the end of a thrilling tag team match, Cesaro & Sheamus would hit their double team finisher on Big E but Kofi Kingston was able to break up the pinfall at the last possible second. Sheamus then takes Kofi out before Cesaro swings Big E in the ring before locking in the Sharpshooter.

On the outside, Kofi would take Sheamus out with a DDT on the floor as Big E tries to power out of the Sharpshooter in the ring but Cesaro would transition into the Crossface. Big E then wills himself up to a standing position as Kofi Kingston tags into the match before Big E powers Cesaro as Big E & Kofi hit the Midnight Hour with Kofi pinning Cesaro to pick up the win and punch their ticket to SummerSlam to face The Bludgeon Brothers for the SmackDown Tag Team Titles! As The New Day celebrate their victory, The Bludgeon Brothers look on from the crowd, ready for the challenge that awaits them at “The Biggest Event of the Summer”.