January 11th 1993 might not be a day that sticks out in the memory, but that day 25 years ago the first episode of WWE Monday Night Raw aired on the USA Network from the Grand Ballroom at the Manhattan Center Studios in New York.

Shawn Michaels, Scott Hall and The Undertaker were just a few of the names that appeared on the first episode of Raw that featured just four matches.

Monday Night Raw has featured so many memorable moments throughout the 25 years it has been on the air and on January 22nd 2018 WWE head back to New York for a special 25th anniversary edition of Raw and will be broadcasting from two locations, The Barclays Center in Brooklyn and the original home for the very first Raw the Manhattan Center.

I caught up with a number of the superstars that have appeared on Monday Night Raw down the years from the very first episode to the current day to get their memories and highlights of WWE’s flagship show. 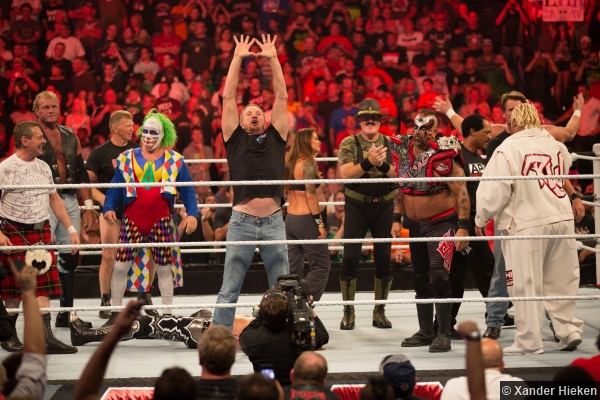 Rick Steiner on appearing at the first episode of Raw:

I didn’t have any idea it was going to last so many years, it was filmed at a music hall in downtown New York. For me it was just another wrestling event and I didn’t really pay that much attention, I honestly had no Idea that it was going be as big as it has become now. It was good to be on the first one and getting acknowledged for that.

I think that is the biggest reaction I had ever got, a lot of people knew it was going to me but there were also a lot of people that didn’t have a clue. It was a different world back then, the internet wasn’t like it is today, these days you would just go online and you can find things out right away but it wasn’t like that then.

Being the voice of Monday Night Raw for so many years was amazing, it was like being on an adventure that you got to renew every week. It was very unpredictable, most of the time we didn’t have the complete show until we were actually on the air.

The whole Attitude Era was huge and when I got the opportunity to help assemble the talent roster that made Monday Night Raw’s even more important for me, because a lot of the guys I was recruiting and signing were now getting to live out their dreams and I always thought that was my number one goal to help wrestlers facilitate their dreams when I was in that talent relations role.

The Raw in Chicago when it was announced I was going to be inducted into the 2007 Hall of Fame was a really cool moment for me, The Georgia Dome Raw was a fun thing because that was my home market back in the day, Doing Raw in Oklahoma City and hearing the Oklahoma University pep band play the Boomer Sooner was really cool.

Jerry ‘The King’ Lawler and I tried to make every show special, every week we had a different challenge but the bottom line is until somebody actually does 52 weeks a year of live television with no break and you do it for several years you don’t really understand what the magnitude of the challenge is. I wouldn’t trade any of it, I loved every moment, I loved every trip, every hotel, and every live crowd and I had the best seat in the house. If you’re a wrestling broadcaster that was and still is the number one job, to be the lead voice on Monday Night Raw.

I’m looking forward to going back and seeing all of my old friends, seeing what they have in store for us on Monday, it’s a big day when you stop and think about a show that has been on the air for 25 years in primetime and is still going strong with a three hour broadcast and is vibrant as it ever was.

I wasn’t particularly a fan of the stalker gimmick but that first night I showed up on Monday Night Raw that was a pretty big explosion from the crowd. I actually got to be Diamond Dallas Page out there, we were in Tampa, Florida and it was a pretty big pop so my first day on Raw was a lot of fun.

After everything with DDP Yoga another highlight for me was when people got the opportunity to see Jake ‘The Snake’ Roberts for the first time in 16 years when he returned on Old School Raw in 2014 in the main event with The Shield, The New Age Outlaws and CM Punk.

During the Monday Night Wars when I was in charge of WCW I’m not going to pretend that I didn’t have a blast kicking their ass because I did! It wasn’t anything personal, the narrative that we’ve read and heard for so long made it sound like I was trying to put them out of business, I wanted to defeat Vince McMahon and I’m not going to deny there was an element of that. However the real challenge was because I admired them, they were the power house that nobody thought anybody could come close to outperforming and the challenge of being the only person to out perform Vince McMahon at his own game was clearly a big challenge and when I actually achieved it, it made me feel pretty good.

When I really appreciated it more than ever was when they turned it around, when they adopted the Attitude Era and they actually defeated me at my own game. I was able to defeat them by introducing a reality into professional wrestling in a way that had never been done before and really targeting the 18-34 year-old demographic in a way that had never been done before and I was very successful with that for 83 straight weeks, we just kicked their ass. When they decided they weren’t going to take it anymore and adapted a whole new style of presentation they turned it around and it was at that point I knew they meant business and were in it to win it. I didn’t like it but I did have to admire them for it.

The two highlights that I can think of immediately are making my debut and being named General Manager because it was such a surprise and no one would’ve ever predicted it or expected it. That was certainly a great deal of fun for me to be a part of that as a character. The other highlight is actually my final show there, I really enjoyed going on trial, I thought it was written so well and we had a lot of really good performances during that segment, that was a lot of fun for me as well as ironic as that may sound.

In the middle of all that getting the opportunity to work with Stone Cold Steve Austin I think was probably the most fun for me. Steve is an amazing guy to work with, we were both able to play off of each other so well and easily and have fun doing it. We both have the same style of performing, we like to ab lib, we like to feel the crowd and just go with the energy and flow of the scene, that was really fun for me.

I’ve been a part of Monday Night Raw for 14 years and just being a part of the evolution in the change of wrestling and seeing the uprising of the new crop of wrestlers showing us what they can do is something special. Seeing the independent wrestlers getting their shots like Kevin Owens, Sami Zayn, Samoa Joe and Finn Balor who had been out there for so long. Now they are getting their chance to live out their dreams of appearing on Raw, that is the highlight for me and I’m privileged to be able to commentate on these guys.

It’s amazing Raw is still going strong 25 years on from it’s first airing and my son Ted DiBiase Jr was part of the WWE and Raw for a number of years, he did very well as a part of The Legacy with Randy Orton and Cody Rhodes and I was very proud of him.

I came into the WWE around the time of the first SmackDown, the first Saturday Night Main Event and the first Monday Night RAW. I don’t’ have anything that stands out from the rest because I did so many things and as so many different characters, Papa Shango, Kama Mustafa in The Nation of Domination working with The Rock, Mark Henry and D’Lo Brown and of course The Godfather with my hoes.

I was glad just to be part of Raw and I’m glad they’re still thinking about me because I haven’t been involved since 2003 apart from the odd special appearance here and there.

I feel very old because I remember the very first episode on Monday Night Raw and I’m glad they’re celebrating 25 years. I was involved in the original ECW invasion of WWE and made a number of appearances on Raw during that angle in 1997, which eventually led to me having a match with then WWE commentator Jerry ‘The King’ Lawler at ECW’s Hardcore Heaven PPV. I felt that storyline kicked off the anything can happen on Monday Night Raw attitude, it really started to turn the tide and it was great to be a part of that history.

There have been so many great memories for me on Raw but the one for me that stands out the most is the night when I won my first WWE Championship by beating The Rock and not just because he is the biggest star in the world but because for me personally I was never seen as WWE Title material but also for the company that is the moment that led to WWE beating WCW in the Monday Night Wars with the rating that night.