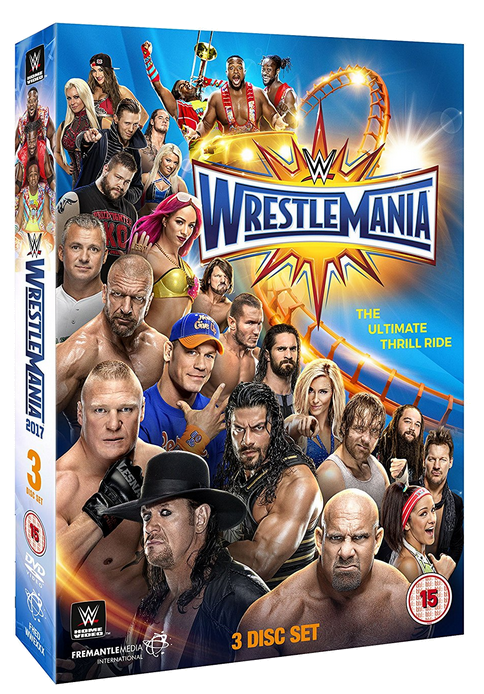 Extras (Exclusively available in the UK release only)

After the largest WWE crowd in history the year before (even discounting the inflated numbers the promotion is notorious for), WWE had a different selling point for this year’s event (the third to officially not be numbered, so we’ve had WrestleMania Play Button for 31, WrestleMania Star for 32 and it’s WrestleMania Sun for 33) and that selling point was to be a WrestleMania XX rematch and a battle for The Yard between the old dog and The Big Dog.

America the Beautiful is back after being absent a few times and then New Day, who were not in competition despite being healthy and coming off the longest tag-team championship reign in history, started things off as hosts of the extravaganza.

The definite benefit of having this on DVD (if you don’t have the Network or can pretend it doesn’t exist) is that on the night, WrestleMania Sun was long slog to get through. A 2hr pre-show (the matches from which are on the UK release, but not the US version) followed by a FIVE HOUR event is too much wrestling, even for a die-hard fan, to consume in a single sitting without serious fatigue becoming a factor.

Another benefit of rewatching the show is to go into Randy v Bray with foreknowledge of what was coming and seeing analysing it from a point of knowledge rather than surprise. I give credit for trying something different, but Randy’s complete no-selling ruins it completely and, unlike Lucha Underground (where this idea would be right at home), it felt out of place, even for Bray Wyatt.

That being said, what I wouldn’t give to go back to the innocent days when we thought that was as bad is it was going to get. I’m looking at you, House of Horrors.

WrestleMania has some great matches, starting with Aries v Neville on the kick-off (all the pre-show matches got time to make an impact), through to Reigns v Taker to close things out, with only Wyatt v Orton being what you could consider a stinker.

Special props to Shane McMahon and AJ for setting the bar high early on with their surprisingly excellent outing. Brock v Goldberg was just two guys spamming signatures and finishers for 5mins and it was WONDERFUL. Everything their previous Mania match should have been and the right guy won in the end.

Miz / Maryse v Cena / soon-to-be-Mrs Cena was the one match where I felt the result was the wrong way to go, especially as a loss for Cena followed by the proposal would have done nothing to take away from his character and would have done everything to elevate the Miz before his transfer to RAW. That being said, even though it was obviously set up for this exact moment, the proposal itself was really sweet and genuine.

It was also obvious that WWE had learned from past mistakes (WrestleMania X8 with Hogan v Rock and WrestleMania 25 with HBK v Undertaker spring to mind immediately) and this time out put the actual biggest match on last as Roman Reigns took on Undertaker in what is most likely the latter’s final match ever.

An excellent 23min brawl, that puts to rest the “Roman doesn’t belong at this level” hysteria forever. An almost literal passing of the torch and the sight of Undertaker leaving his hat, coat and gloves in the ring will be this generation’s Hogan Slams Andre moment captured in time forever.

If anyone deserves to go out on his back and then have that last epic moment, it’s Undertaker.

The Hall of Fame ceremony, as always, is presented in full, with a great roster of inductees this time out; DDP and Kurt Angle being the standouts this year.

Also included, for UK eyes only, are the three kick-off matches, which were all good in their own ways, though the CW title match is the best of the trio.

Too long at 5hrs (plus the pre-show), having this to be able to stop-start at leisure is a blessing. All of the matches are worth watching (even Bray v Orton for having the balls to try something different), the Hall of Fame is wonderful, the final shot of the show will be immortalised in time forever and my only issue is due to hindsight because WWE didn’t capitalise on the absolutely blistering opening segment to the following night’s RAW. Two full minutes of “THANK YOU TAKER” chants, interrupted by Roman’s music, a cascade of boos and ferocious chants from the fans in Reigns’ direction, five little words by the ex-SHIELD guy and a top-level heel was born… only for it to be forgotten almost as quickly.

That is not worth getting the Blu-Ray for, so stick with the DVD.