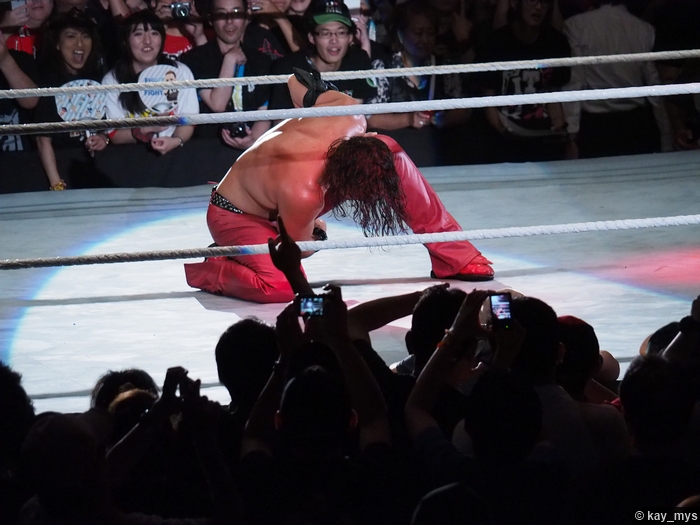 After withstanding the bizarre tactics of Bray Wyatt and hitting his former master with the RKO to secure his thirteenth World Title at WrestleMania, new WWE Champion Randy Orton kicks off SmackDown LIVE. The champion proclaims that, at WrestleMania, he proved that he is Bray Wyatt’s “master” and that Bray will never forget his name. Bray Wyatt then appears on the Tron, saying that Orton is the “master of nothing” and he is coming to take back what is his. Bray then says that he knows that he has a rematch coming and that he has something “very special” planned for Orton. The former champion continues, saying that he wants to face Orton in a “different kind of match”, saying this match will push Randy’s “body” and “mind”. Bray says that Orton will be “twisted” physically and mentally like he has never been twisted before, saying that he’s going to hear Randy “scream” and watch the champion’s “soul devour itself” and, at the end of the match, one of them will be sentenced to “eternal damnation”. Bray then says that he wants to fight Randy Orton in what he calls a “House of Horrors Match”!

Randy responds by saying that he doesn’t know what a House of Horrors Match is, but he accepts the challenge! The champion then dares Bray to come to the ring so he can kick his ass one more time and “The Eater of Worlds” complies, appearing behind Orton, attacking the new champion before Randy is able to get the advantage, hitting Bray with a powerslam. The WWE Champion is then dragged out of the ring by none other than Erick Rowan! Apparently re-aligned with Bray Wyatt, Erick Rowan would bring “The Viper” back into the ring as Wyatt & Rowan would beat Orton down before the WWE Champion is saved by an unexpected ally as Luke Harper makes his way to the ring! Harper takes Erick Rowan out at ringside before entering the ring and taking it to his former leader, leveling Bray Wyatt with a big boot as “The Eater of Worlds” rolls to the outside as Wyatt & Rowan collect themselves while Randy Orton & Luke Harper stand tall in the ring side-by-side.

Curt Hawkins would then make an appearance on SmackDown LIVE, saying that everyone is talking about next week’s Superstar Shake-Up between RAW and SmackDown LIVE when they should be talking about him. Hawkins then says that he is issuing an open challenge to anyone in the back to face him one-on-one right now! The man to answer the challenge would be one of the most popular stars in NXT as “The Perfect 10” Tye Dillinger would make his SmackDown LIVE debut! In the end, it was Tye Dillinger hitting Curt Hawkins with the Tye Breaker, pinning Hawkins to pick up the win, making a strong showing in his SmackDown LIVE debut.

Doing their best impersonation of John Cena & Nikki Bella from their Total Bellas spoof, The Miz & Maryse would make their way to the ring on SmackDown LIVE. Doing his best John Cena impression, The Miz would tell Maryse that he loves her and Maryse, as Nikki Bella, would say that she’s glad that she tricked Cena into getting her what she wanted. “John Cena” then says that he got what he wanted and that’s a moment that made him seem more “relatable as a human being” before saying that, just like everything in his life, the diamond is “not real”. “John Cena” then says that, effective immediately, he and “Nikki” are leaving WWE and going to Hollywood, saying that they are going to be gone for a “very long time”. The faux Cena then leads the crowd in a “No More Cena” chant before he and the faux Nikki start to leave the ring.

However, The Miz & Maryse’s exit is halted when a man holding a violin appears on the stage. The tune that the musician plays signifies the arrival of one of the most popular competitors in NXT and the entire world as “The King of Strong Style” himself, Shinsuke Nakamura arrives on SmackDown LIVE! The charismatic former NXT Champion dances his way to the ring to an explosive response from the Orlando crowd.

Then it was time for the main event as new WWE Champion Randy Orton would team up with Luke Harper to face “The Eater of Worlds” Bray Wyatt and the returning Erick Rowan. During the match, Randy Orton would set Bray Wyatt up for the RKO but that’s when the lights would go out and, when they came back on, Bray was on the outside of the ring. This would leave Erick Rowan all alone with Randy Orton & Luke Harper as Harper catches Rowan with a super kick before Orton follows it up with the RKO, pinning Rowan to pick up the win for himself and Luke Harper. Despite losing the match, Bray Wyatt was rolling on the ramp and laughing before getting to his feet, looking on as Randy Orton & Luke Harper celebrate their win.

What did you think of the post-WrestleMania SmackDown LIVE? Post your comments in the box below.