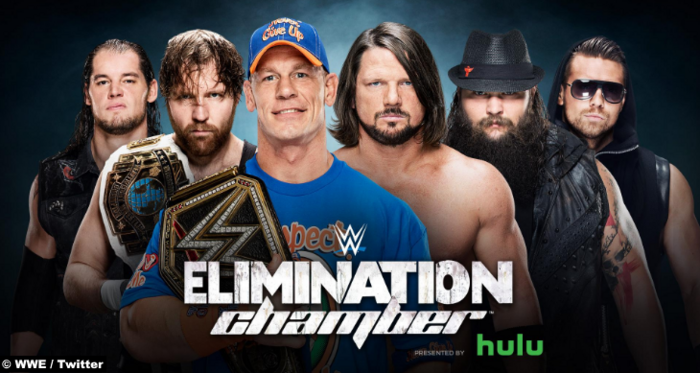 The 7th edition of WWE Elimination Chamber will be a SmackDown LIVE exclusive pay-per-view and it will come to you, live on the WWE Network, a week from this Sunday on February 12 from the Talking Stick Resort Arena in Phoenix, AZ. On this week’s SmackDown LIVE, the five challengers for the WWE Championship inside the Elimination Chamber were confirmed. Also, the SmackDown Tag Team Titles and the SmackDown Women’s Title will be on the line at the event. Here is the updated card:

In the WWE Championship Elimination Chamber Match, four of the six Superstars in the match will be locked inside four designated pods within the Elimination Chamber structure with the other two Superstars starting the match one-on-one. Every five minutes, one of the pods will open to allow another competitor into the match. This will continue until all four pods have been opened. Elimination occurs by either pinfall or submission and elimination can occur at any time regardless of if all of the pods have been opened or not. The last Superstar remaining in the match will leave as the WWE Champion.

In the Tag Team Turmoil Match for the SmackDown Tag Team Championship, two teams will start in a traditional tag team match format, but when one of the two teams is defeated by either pinfall, submission, disqualification, or count-out, that team is eliminated and another team will come out to take their place. This will continue until every one of the teams have entered the match and the team that is left after all other teams have been eliminated will be the SmackDown Tag Team Champions.