Your SO OF COURSE preview of WWE (RAW) Roadblock 2016 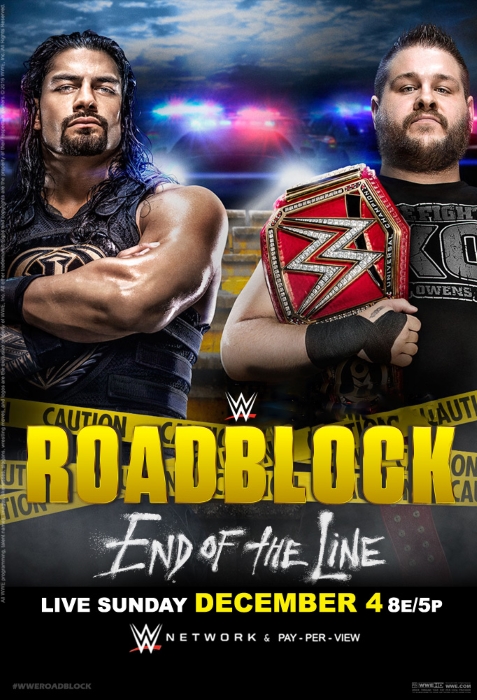 Last time on RAW’s SO OF COURSE, the red brand aired the Hell in a Cell PPV headlined by Sasha Banks vs Charlotte in a feud-ending match of epic proport—

Since Hell in a Cell we’ve had Survivor Series, which was a fine dual-brand show, and then TLC which was a very good SmackDown-brand show. Now we come to Roadblock…It’s a RAW-exclusive show, which means a barely enthused, barely attended arena will be watching the same ten people you’ve been watching for the past three RAW-exclusive shows wrestle over the same feuds they’ve been having for the past six months. Five matches are currently announced, not counting a pre-show match between Big Cass and Rusev (no word yet if it’s an Enzo on a poll match).

Not competing on the show is New Day who just broke Demolition’s record for longest tag title reign of all time. They still have a long way to go to match the NWA World Tag Team record, currently owned by “The Skullcrushers” between 2008-2010 who held the title for 777 days, but no one cares because the NWA hasn’t mattered since the early 1990’s. New Day will probably lose the titles on the first Raw of 2017 (which WWE likes to make a big deal out of).

on to the show.

This feud all started with Mick Foley wanting to punish Sami Zayn for failing to win the IC title from The Miz at Survivor Series. That seems odd since (A) Mick is supposed to be a babyface, and (B) Mick has repeatedly talked about how unfair Braun Strowman is when he goes up against guys much smaller than he is. So this entire feud seems like a convergence of hypocrisy not seen since WWE started an anti-bullying campaign.

Zayn and Strownman had a Raw match that ended when Strowman beat Zayn so bad Mick got flashbacks to matches with Vader. Zayn demanded a rematch but Foley would not grant it, fearing that Zayn’s health would be at risk. He then booked Curtis Axel to take on Strowman because lolwhocaresaboutCurtisAxelol. Foley then teased that Zayn would be traded to Smackdown for Eva Marie which made basically everyone celebrate because it meant (A) Zayn would get to be on the better show, and (B) Eva would be removed from it. Foley then said “gotcha!” and announced that no such trade was happening and that he only said that to light a fire under Zayn. He then approved the match with Strowman and put in place a ten minute time limit which makes no sense because (A) Strowman doesn’t need ten minutes to beat Zayn, and (B) how would a time limit help Zayn win, since his only chance would be to wear the big guy down over time. Is Foley a heel or just stupid? Alternate question: Who is writing this feud? Is he evil (for teasing a brand trade the fans want, and then nixing it) or just stupid (for teasing a brand trade the fans want, and then nixing it)?

Jericho has been Kevin Owens’ number one fan for the better part of the Raw brand split and as such he’s had to run interference for him against Seth Rollins, who has been determined to “get his title back” (despite his never having been Universal Champion, but whatever). In one Raw match, Owens defended against Rollins, with both Reigns and Jericho banned from ringside. But since WWE authority figures are, if nothing else, stupid, Jericho came to ringside anyway and interfered in the match, helping Owens retain the title. He got away with it because he was wearing a Sin Cara mask he likely found in the trashcan (because he sure wasn’t going to pay $25 dollars for it, are you kidding me with those prices WWESHOP.COM?).

Rollins then turned his attention away from Owens and the title toward getting revenge on Chris Jericho (which is exactly what Jerichowens wanted, but I digress). Oh and then, randomly, Rollins announced that he was calling out Triple H (after like four months of saying nothing about him) and would get to him by going through Jericho first. Because Jericho has always been a henchman of Triple H.

So now we have this match, which is built on a foundation of illogic and silliness but which promises to entertain due to the incredible talents of both performers. So if you haven’t been watching Raw and you’re just catching the monthly shows, you’re going to be just fine. Commentary will catch you up on all the drama, in the most obnoxiously repetitive way possible, while you sit back and watch a four star match that hopefully won’t be ruined at the end by Triple H’s interference.

I’m a fool for predicting that the Roman Reigns title match will not be the main-event, but I don’t care. I’m putting the women’s match in the top spot since it’s an IRONMAN (all caps) match and that match is supposed to be the showcase exhibition of two superstars at the end of a great feud. It’s like Hell in a Cell, but instead of violence it offers expert wrestling craft. A match like that is supposed to main-event.

But I know it won’t. This match will.

Reigns won the right to challenge Owens for the Universal title by beating Owens in a non-title match on Raw. That’s The Most WWE Thing Ever, and when Owens retains via shenanigans over Reigns, rendering the previous loss moot, it will be The Most WWE Thing Ever with Cheese. It is possible that Reigns wins the belt (he is Roman Reigns after all) but it doesn’t feel like this will be the beginning of his long-awaited (and previously started-and-stopped-because-of-a-pesky-wellness-violation) run as The Man. The crowd is still torn between apathy and vocal frustration when it comes to “The Big Roman Reigns Push” and a mid-December PPV just doesn’t feel like the right time to kick off such a push. If anything, Reigns wins the title and KO wins it back on, say, the first Raw of 2017 (which WWE likes to make a big deal out of). Either way, whatever happens here will be mostly inconsequential because it’s very likely Kevin Owens walks into WrestleMania 33 as Universal Champion (probably against Finn Balor).

RICH SWANN vs TJ PERKINS vs (THE) BRIAN KENDRICK

Once upon a time the cruiserweights were in Full Sail, flipping and flopping and wowing the crowd in their little tournament, and then they moved to Raw and everyone went “nooo!” and some optimistic fan was all “oh it’ll be fine, trust me. They were hot at Full Sail, and Vince won’t neuter them the way he did back in the day!” Here’s that guy watching the cruiserweight division on Raw:

The cruiserweights are basically the new “Divas.” Their matches are short and pointless, no one in the live audience cares and the people at home aren’t invested in them either. And as with the old Divas Division, there are some talented people (Rich Swann, the current champion, is great) but you’re never given a fair chance to enjoy them. Their matches are a bathroom break.

Swann won the title from Kendrick who won it from Perkins. They wrestled each other a few times and blah blah blah now it’s a triple threat.

Wherever it ends up on the card this is the true main-event, and even though I’ve seen enough of this feud to last a lifetime, I can’t say the two women don’t work amazingly well together. They’ve yet to put on even a mediocre match that was given time to work. This will be a thirty minute IRONMAN match, where the superstar with the most pinfalls or submissions at the end of the time-limit wins the belt.

Much has been made of the fact that Sasha Banks is the more popular of the two (and not just because she’s the babyface and Charlotte’s the heel) and that WWE seems determined to get over this “PPV winning streak” that Charlotte is on. Much like everything else WWE does, there’s an overriding sense of engineering and orchestration which prevents fans from just enjoying things like streaks. We know the wins and losses are pre-determined, but sometimes that fact sticks out like a sore thumb, when it’s supposed to feel organic within the context of the feuds. How many times are we going to watch Sasha win the Women’s title on Raw and then drop it back to Charlotte on PPV, just so we can hear “Charlotte’s PPV win streak is now up to ____ in a row!” The whole thing just feels…fake.

This needs to be the end of the feud and Sasha needs to walk away with the title. If that means Charlotte’s win streak on PPV is ended, so be it. Let’s be real though: What’s going to happen is Ric Flair is going to come out, seemingly to help Sasha, and then turn on Banks and help his daughter (who had previously slapped him and told him once more how much she didn’t need him) win the belt. Sasha will then win it back on the first Raw of 2017 (which WWE likes to make a big deal out of).