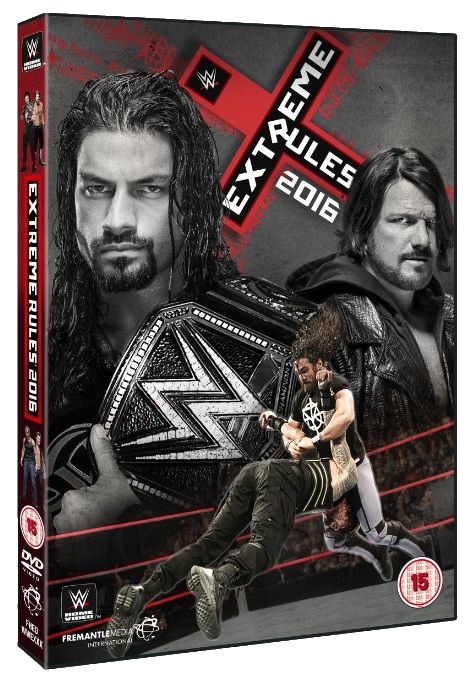 In the PG world of modern WWE (although that has been getting pushed more gradually each week and in a subtle manner) is no place for an event called Extreme Rules, but for 2016 the managed to give us two genuine contenders for Match of the Year.

The opener is a bit lame as The Usos are in one or their career valleys and their opponents haven’t quite found their feet in WWE, so it’s a bit disjointed. It’s followed by a basic big man / little man match that was barely above TV quality, but does have a wonderfully structured finishing sequence.

Similarly, New Day v Vaudevillains is also not quite PPV quality (that being said, it does feature an amazing near-fall that caught EVERYONE off guard and had a TIME MACHINE as part of the build up), while Charlotte v Natalya is forgettable as soon as the the match ends and the cage match between Dean Ambrose and Chris Jericho is at least 10mins too long (ludicrously, it’s the longest match of the night). It too has a a great finishing sequence, but not enough to wipe out the sheer tedium of the middle 15mins of the bout.

This leaves the matches for the two top singles titles to salvage the show… and boy do they manage that.

Up first, the four-way for the IC belt is MotN and as mentioned earlier, a genuine contender for MotY honours. Words cannot do justice to how fantastic this match is, with everyone involved bringing their best and leaving it all in the ring. Miz is having a 2016 to remember, Zayn v Owens is killing it and Cesaro is Cesaro, so that’s all you need to know.

Closing the event, Roman Reigns (who is still receiving “YOU CAN’T WRESTLE” chante, which is obviously a ridiculous statement to make) and AJ Style spend 20+ mins tearing it up in a thrilling contest. AJ gets brutalised at times in this match and Roman (all jokes aside) gets to look strong with a litany of power moves, including a wonderful sit-out Splash Mountain for a tense near-fall.

Having one Match of the Year contender can make a show worth seeking out, so this featuring two makes it a must-see.

Only a single extra and it’s the pre-show encounter of Dolph Ziggle v Baron Corbin, which I really enjoyed. Being a fan of DZ and a huge fan of Corbin since his NXT debut, I may be biased, but it is easily one of the best pre-show bouts since they became a standard for WWE special-events (they’re not really PPVs any more).

Two classics and two decent matches, make this work your time if you haven’t seen it yet (the two MotY candidates are worth it alone), but as with all events of this nature, if you are regular subscriber to the Network, I cannot in good conscience say that you’re better off buying a DVD when you already have access to it.

Points: 7/10 (for non-Network subscribers only)