For those who didn’t get to buy the Rise And Fall of ECW DVD, you were one of a very few. The DVD smashed records left, right and centre. So it was only fitting that WWE released a follow up entitled “Bloodsport: ECW’s Most Violent Matches”. Could it live up to the expectations? In a word: yes. 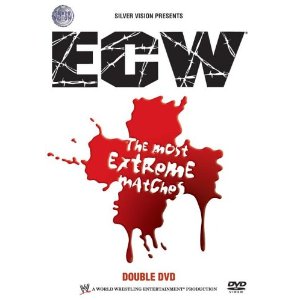 Please note this DVD is titled “Bloodsport – ECW’s Most Violent Matches” in the USA!

Not that the DVD includes the very best of ECW, because to do so would require far more room for matches, room which a two-DVD set simply cannot accommodate. However, for what it is, it’s a must watch for any ECW fan.

Wait a minute, did I just give out the conclusion to this review before I could give you reasons why? How could I do such a thing, going against the grain of your typical, everyday DVD review? Well, quite frankly, there is nothing else that I can really say. No amount of stalling will change my feelings on how good this DVD really is. For a start, it has Paul Heyman presenting. PAUL HEYMAN, ladies and gentlemen. The man who knew ECW better than anybody, gets to introduce each match, each feud, and sell to us the significance of what it meant in the grand scale of things. No ECW DVD should be without Paul Heyman, and you soon come to appreciate just how good the guy actually is at making you want to see the matches on offer.

That’s just for starters though. A good presenter needs good matches to present, and there’s no short supply of them here. From the old school run of the promotion with the Public Enemy feuding with Cactus Jack and plucky young underdog Mikey Whipwreck, to the anarchy that reigned in the Taipei Death Match between Ian and Axl Rotten, all the way to the lucha libre extravaganza as Rey Mysterio Jr (yes, THAT Rey Mysterio) and Psicosis (yes, THAT Psicosis) go full throttle in a Mexican Death Match, it soon comes to the forefront of your mind that ECW wasn’t just extreme in the sense of hardcore, but extreme in it’s diversity, and how it could mix and match different styles to create one dynamic product.

A stretcher match between Rob Van Dam and Sabu doesn’t fail to meet the expectations of the fans that have grown accustomed to each mans style, and the Barbed Wire title match between Sabu and Terry Funk makes even the most desensitised wrestling fan cringe, especially at the ending. No DVD is complete without the infamous Beulah vs. Bill Alfonso match, and it’s one you have to watch more than once to understand. Technically, it isn’t great. But there is a reason why it is considered to be the most heated and important fifteen minutes in entire ECW’s history. Taz vs. Bam Bam Bigelow is often renowned for its “breaking through the floor” moments, but people forget how hard-hitting the matches themselves were, as this example included attests to.

Finally, we reach the dying days, with the push of Mike Awesome as he destroys Spike Dudley, as well as the famous 3-Way Dance between Super Crazy, Yoshihiro Tajiri and Little Guido (otherwise known as Nunzio) and the I Quit match between Tommy Dreamer and CW Anderson on the final ECW PPV before it closed. As an added bonus, Mike Awesome vs. Masato Tanaka from ECW One Night Stand is included, a match that many considered to be the show stealer at last years one-night extravaganza.

As far as extras goes, there are enough to make your mouth water. Interviews with Axl Rotten, Justin Credible, CW Anderson and others on a number of different subjects would have suited the original R&F DCD, but their presence here is not unwanted. It’s nice to see that non-WWE talent involved with ECW make their way onto the disc to share their thoughts. Since One Night Stand suffered from a weak set of extras, this more than makes up for it.

I’d normally write out a full-blown conclusion here and give a grade. Instead, you just get the grade. If the idea of some of the most brutal and entertaining matches in an ECW ring doesn’t tempt you on it’s own merit, then you really shouldn’t get this DVD. But it does, so buy it right now. You won’t regret it.