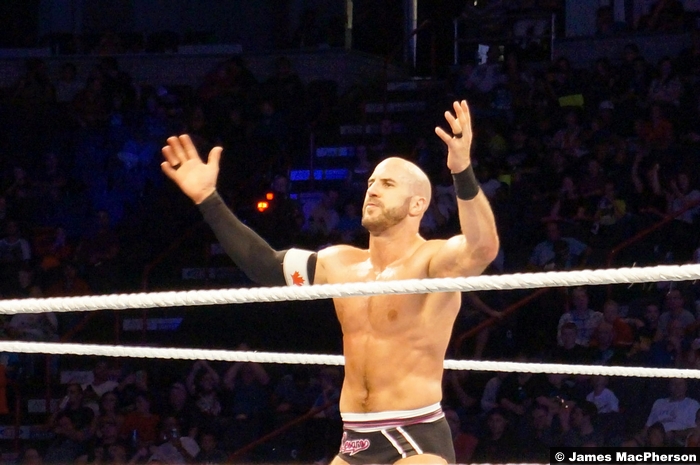 SmackDown then officially gets underway with the aforementioned Fatal 4-Way Match as “The Swiss Superman” Cesaro, newcomer Apollo Crews, “The Celtic Warrior” Sheamus, and Alberto Del Rio would square off with the first Superstar to earn a pinfall or submission earning themselves a match against Rusev for the United States Championship later in the night. Early on in the match, former League of Nations teammates Sheamus and Alberto Del Rio would work together to try and overcome their two opponents, but as soon as Cesaro is sent out of the ring, Del Rio abolishes the temporary partnership by catching Sheamus with, appropriately enough, the Back Stabber. Shortly after this, Alberto Del Rio would lock Sheamus in the Cross Armbreaker before Apollo Crews breaks it up and Cesaro takes out Crews.

With an opponent in three of the four corners, Cesaro would go corner-to-corner with uppercuts for everyone before getting taken out with a backbreaker from Sheamus. Rivals Sheamus and Apollo Crews would then square off in the match with Crews sacrificing himself to take Sheamus out of the ring. This leaves Cesaro and Del Rio alone in the ring as “The Swiss Superman” sends Del Rio for a ride with the Cesaro Swing before locking in the Sharpshooter, making Del Rio tap out as Cesaro picks up the win, earning himself a shot at the United States Championship later in the night! However, after the match, Cesaro would celebrate his victory before exiting the ring and this is where Alberto Del Rio would ambush “The Swiss Superman”, sending Cesaro shoulder-first into the steel steps. Del Rio then positions Cesaro on the ring apron before delivering his signature double stomp, sending Cesaro crashing into the arena floor. As referees check on Cesaro, things would go from bad to worse for “The Swiss Superman” as United States Champion Rusev comes down to the ring. The champion says that, if Cesaro is truly “The Swiss Superman”, then Cesaro will accept his challenge to have their United States Title match right now!

While it initially appears that Cesaro was going to take the safe path and wait until later in the night for his title match, the badgering from Rusev would change the mind of “The Swiss Superman” and, despite being in no condition to compete, Cesaro would carefully enter the ring and the United States Title match would get underway! Throughout the match, Rusev would target the injured ribs of Cesaro, trying to wear “The Swiss Superman” down, but Cesaro would continue to fight back, even managing to pull off a springboard European uppercut. Cesaro then knocks the United States Champion out of the ring before diving off of the ring apron, taking Rusev down. Back in the ring, Rusev would regain control of the match after a powerful side slam and an impressive senton, further torturing the injured ribs of Cesaro.

Cesaro would refuse to give up the fight, however, continuing to fight through the pain and, when Rusev tries for the Accolade, “The Swiss Superman” counters, trying to lock in the Sharpshooter. However, some well-placed kicks to the mid-section from Rusev would keep the champion out of the submission hold before Rusev would again look for the Accolade, but Cesaro counters again, this time nearly surprising Rusev with a roll-up! Rusev then blasts Cesaro in the head with a vicious kick before the United States Champion is finally able to lock in the Accolade, leaving Cesaro no choice but to tap out as Rusev wins the match and successfully retains the United States Title.

The women would be in action on SmackDown as Charlotte’s protégé Dana Brooke would go one-on-one with NXT upstart Billie Kay. Despite an impressive performance by Billie Kay, it was Dana Brooke scoring with the Samoan Driver, pinning Billie Kay for the win.

Then it was time for Miz TV as Intercontinental Champion The Miz and his wife Maryse would be in the ring on SmackDown. After being introduced by Maryse, The Miz says that, with the WWE Draft coming up on July 19, this could be the last Miz TV on SmackDown or it could be the signature talk show segment on SmackDown. Before the Intercontinental Champion can even introduce his guest, WWE Champion Dean Ambrose makes his way to the ring for Miz TV. Claiming that he was running short on time, Dean Ambrose would enjoy a sandwich during the interview, much to the chagrin of The Miz. Ambrose then says that he’s got to keep in shape now that he’s the WWE Champion before saying that he’s in the “talk show business” too. The Intercontinental Champion then says that the only thing that the Ambrose Asylum ever had was a “stupid plant” before saying that the fans want Miz TV.

Amidst their budding rivalry with WWE Tag Team Champions The New Day, The Wyatt Family was on SmackDown as The Wyatt Family’s Erick Rowan & Braun Strowman, with Bray Wyatt seated at ringside, would face two local competitors by the names of Aaron Hale and Mike Duwaty. In a dominant performance from the two big men, it was Braun Strowman slamming Mike Duwaty on top of Aaron Hale, pinning both men at the same time to pick up the impressive win. After the match, Bray Wyatt would enter the ring, kneeling next to the two competitors. However, before Bray can speak, The New Day appears on the Tron, Wyatt Family style, as Kofi Kingston and Big E make jokes at the expense of The Wyatt Family while Xavier Woods appears uneasy with the whole situation. Bray Wyatt then responds by saying that he loves how everything is a “joke” to The New Day before singling out Xavier Woods, advising Xavier to tell his teammates that the “devil calls” for Woods. Bray then concludes by telling Xavier that all he can do now is “pray and run”.

After Summer Rae interrupted her interview earlier in the night, “The Boss” Sasha Banks would go one-on-one with Summer Rae on SmackDown. Despite an impressive showing from Summer Rae, it was Sasha Banks locking in the Bank Statement as “The Boss” makes Summer tap out to pick up the win.