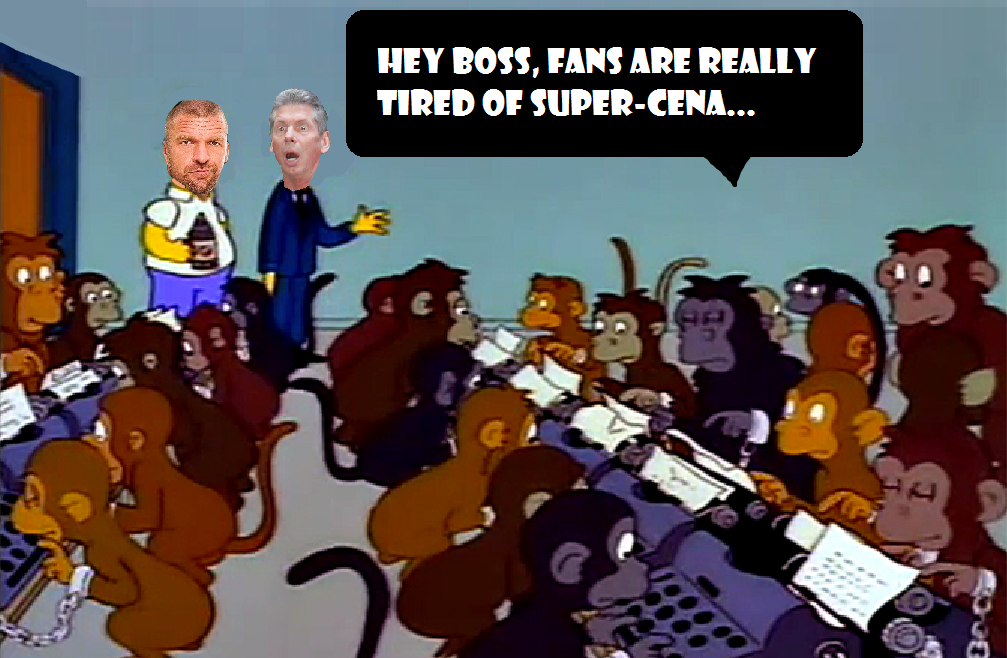 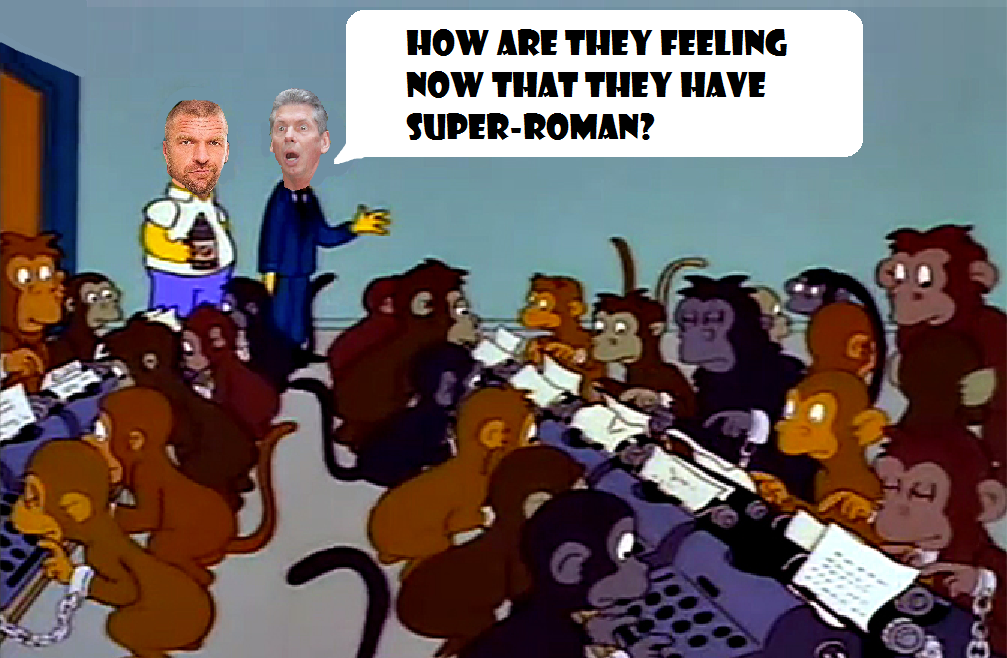 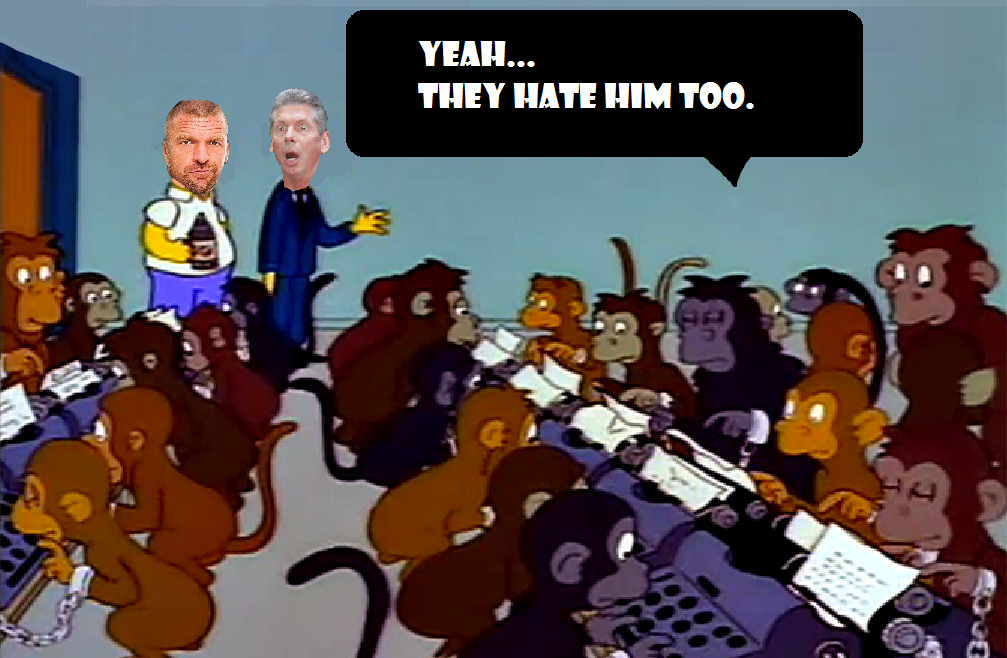 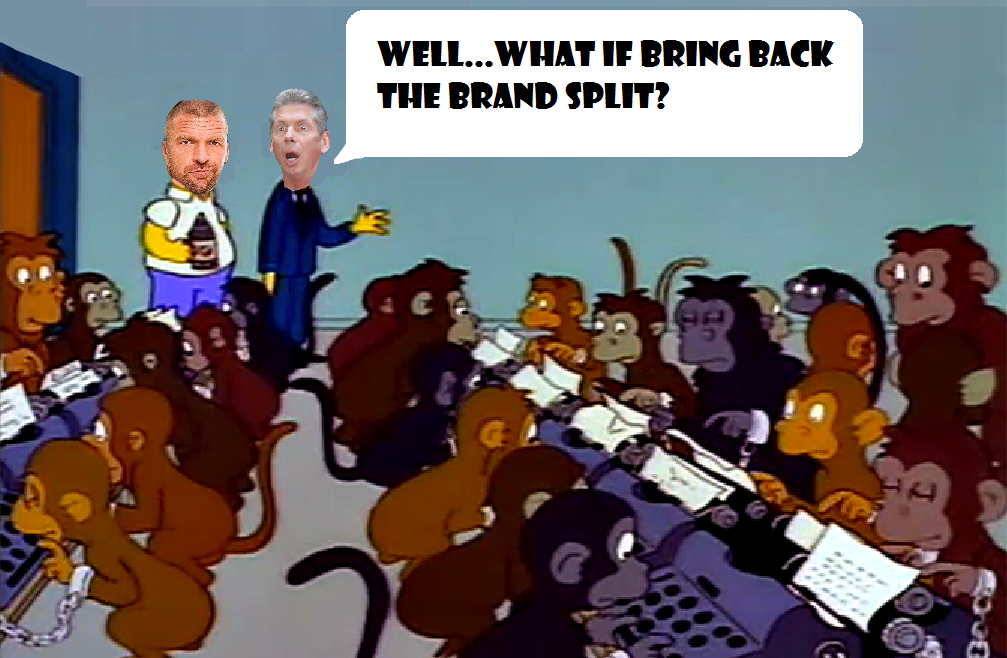 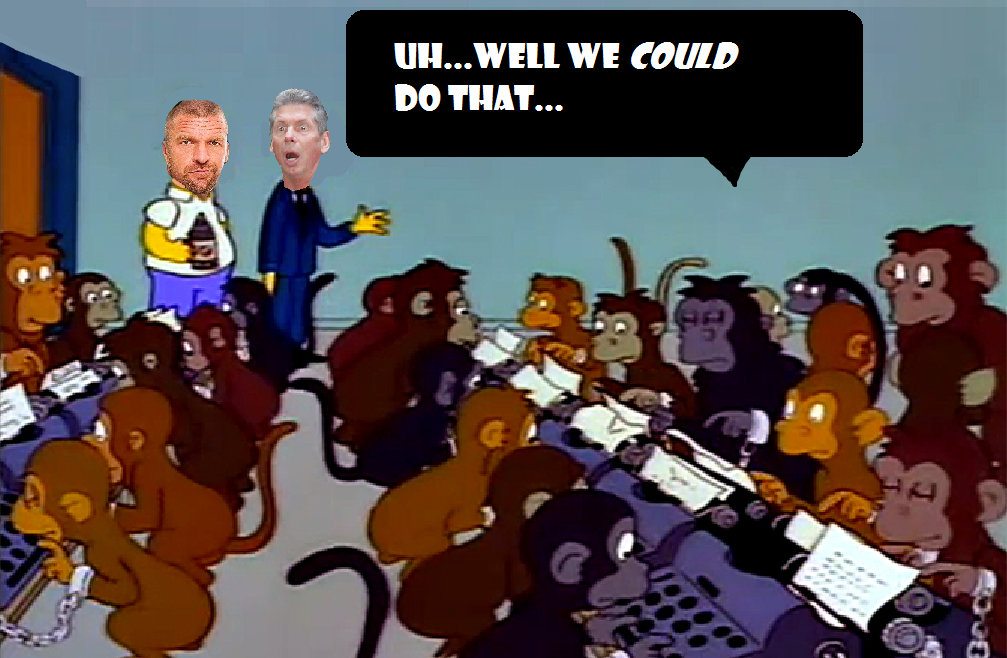 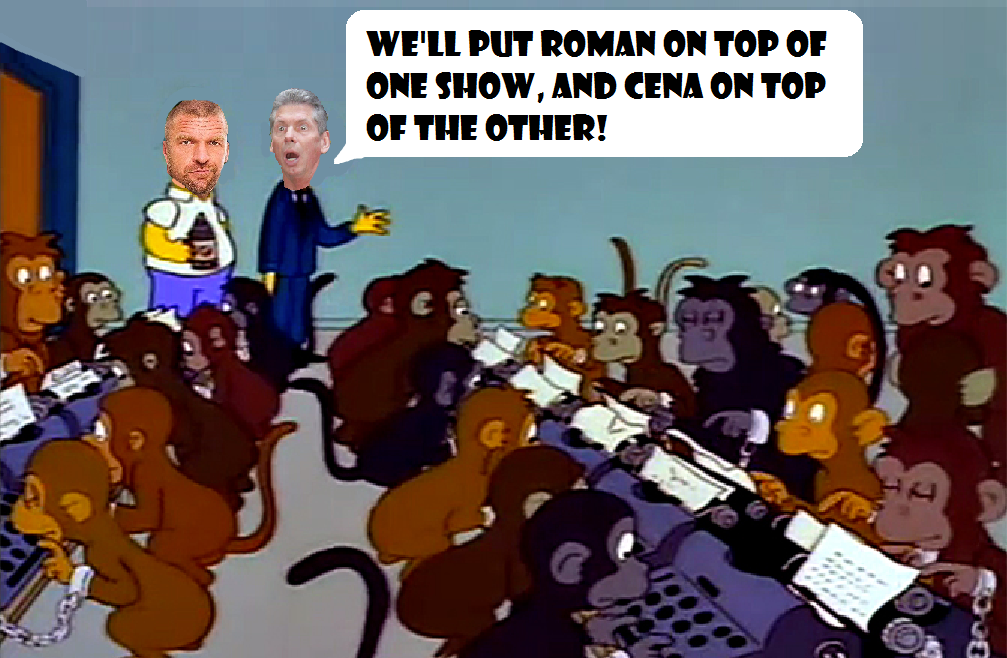 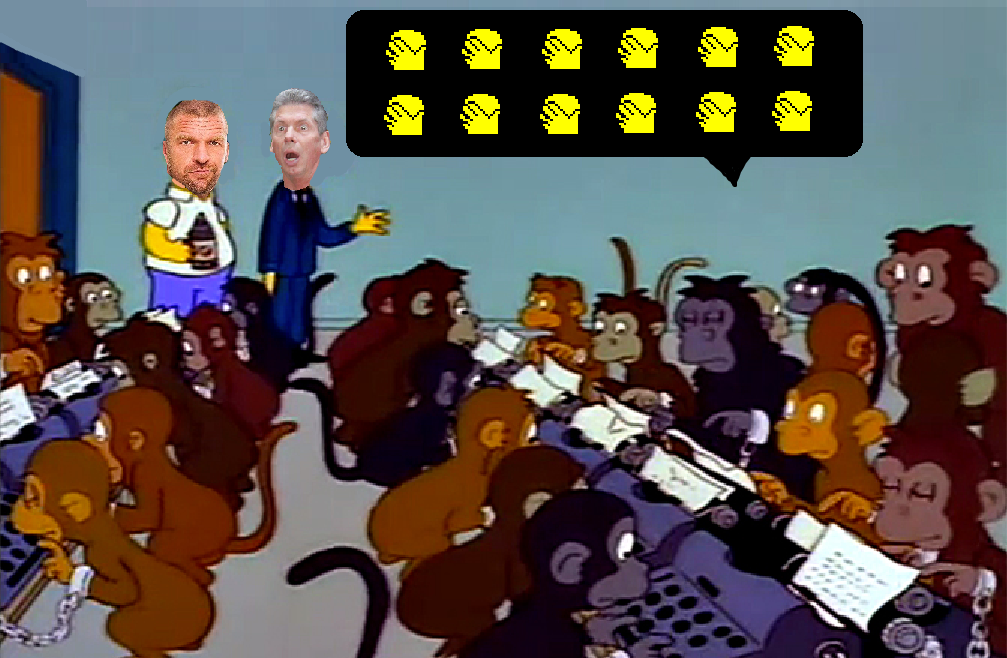 It’s back, ladies and gentlemen, and WWE promises this time the Brand Split will be better than ever!

Back in 2001 Vince McMahon bought the rights to WCW’s tape library, their roster of undercard wrestlers (the big name guys had separate contracts with Time-Warner), most of their brands, logos, trademarks and other likenesses. He bought it all for a cool 2.5 million dollars…all so he could fire Jeff Jarrett on live TV. Immediately thereafter the WWF hosted a little-watched PPV entitled WrestleMania X-Seven. Somewhere along the way ECW folded and Vince scooped up its rights and a few key performers too (probably for much less than 2.5 million dollars, I’m just guessing). Vince could not have been more on top of the world.

For the next couple months Vince and his braintrust spit-balled different ways to get the most out of their acquired rivals. The idea Vince kept coming back to was boiling them in hot oil and crucifying them all upside down. When the network passed, they settled on plan-B: Turning Monday Night Raw into a new version of WCW Monday Nitro. So basically they settled with torturing the fans instead of the talent. On July 2, 2001, Monday Night Raw transformed (for a segment) into WCW Monday Nitro as Booker T took on Buff Bagwell (Buff Bagwell? Yes, Buff Bagwell…and holy crap I just typed his names three times and it finally dawned on me that his name is “Buff” “bag’s well”…cause he’s a male prostitute…moving on). JR and Paul Heyman were replaced with Scott Hudson and Arn Anderson. The on screen graphics, the ring apron, even the referee all changed to match the WCW brand (or at least the poorly-conceived new version of the logo that the WWF made).

The fans in Tacoma, hoping to see Steve Austin or Chris Jericho or Kurt Angle took out their frustrations on Booker and Buff, booing every second of their fiasco of a match. It was enough for Vince to completely scrap all the plans he had already okay’d (and which were already in development). Instead of giving WCW its own timeslot, Vince went with an InVasion angle where the whole WCW roster (or whatever WWF had acquired) took on the whole WWF roster in a giant heel vs face feud that stretched until Survivor Series. It sucked. It all sucked. It’s the biggest bust of a storyline in pro wrestling history. Let’s not rehash it.

Once the smoke cleared and WCW was vanquished (in more ways than one) WWF limped through WrestleMania X-8, relying mostly on the Rock vs Hogan feud to keep any kind of positive buzz going. After WrestleMania was behind them, Vince looked at a roster that was simply too big to give everyone the spotlight. So they went back to their original idea of splitting the roster up, this time without the baggage of WCW hanging over everything.

Thus the Brand Split was born. On March 25, 2002, a draft was held which divided the roster into two groups: The “RAW” brand and the “SMACKDOWN” brand…

The split remained in effect from April 1, 2002 until September 5, 2011 when Smackdown superstars started appearing on Raw (originally Raw superstars remained on Raw, however, but eventually the shows came to feature the same talent pool).  Though rules were relaxed on and off throughout those eight and a half years, for the most part the two brands remained independant. Talent would move back and forth every now and then as a result of trades, or when a superstar would be “fired” on one show and “hired” onto another, and every year there would be a draft to “shake things up.” Despite the roster changes over the years, both shows quickly developed an identity and certain performers remained basically locked-in to their brands for almost the entire split (Triple H was almost always a Raw guy, and Undertaker was almost always a Smackdown guy, etc).

Over the years the Brand Split did somethings right and somethings wrong. Mistakes were made and oppertunities were not always fully explored, but the potential was there and if capitalized on this time, the next version of the brand split can potentially outdo the first.

WHAT THE OLD BRAND-SPLIT DID RIGHT:

WHAT THE OLD BRAND SPLIT DID WRONG:

Looking at what the Brand Split did wrong it’s clear that there was nothing inherently wrong with the idea, it just needed a little more willpower on the part of Vince McMahon and a little better execution with regards to the mid and undercard. With that said, let’s think about what needs to happen this time to ensure that the next Brand Split works where the old one didn’t.

WHAT THE NEW BRAND SPLIT NEEDS:

1) Vince needs to leave one show alone. He’s 70 years old; he needs to turn at least one show over to Triple H (the heir, sorry Shane) to see what he can do. Triple H has already proven with NXT he can book a wrestling show that is consistently entertaining (and occasionally brilliant) on a small stage. The fact that he books NXT without any input from Vince should put all his doubters and haters in their place. Giving Triple H the reigns over Smackdown is the next logical step.

2) Smackdown being live and on USA will help sell that it is another A-show, but they have to keep treating it like that, with a healthy division of superstars across both brands. They can’t just pull a hot superstar from Smackdown and put him on Raw just because the Raw writers botched a storyline. At the very least, whenever a big name moves from one show to another another big name needs to be moved over to replace him.

3) In order to prevent the tag division from withering, they should keep all teams on one show and therefore keep the women on the other show.

So here’s my proposal:

That allows a top title, a midcard title, and a specialty title to exist on both brands. That’s a good balance and variety. The reason I settled on putting the Women on RAW is because there’s more potential for multiple storylines with the women than there are with tag teams, and RAW has an extra hour of airtime to fill. Of course, that’s all dependent on Vince actually giving the women multiple storylines at the same time.

As for the idea of Brand-specific PPV’s, that was a problem a decade ago that no longer exists today: With the WWE Network, they can run brand-specific shows that last two-to-three hours. They can air them monthly, semi-monthly, whatever. WWE can be much more versatile now than they were when they relied on the PPV model.

ODDS AND ENDS TO CONSIDER:

2) The original brand split divided up a 63 member roster into two 30-person brands (Austin was a free agent who eventually signed with Raw, and champions Triple H and Jazz floated between both shows). Just looking at WWE’s roster, there are about sixty superstars (not counting guys like Rock and Undertaker) to split up, but Raw has an extra hour that it didn’t have back in 2002. WWE is going to have to sign some new talent, not only to keep storylines fresh, and not only to keep their house show circuit worth the ticket-buyers’ money, but also to insure against another injury curse like they have dealt with for the past six months. Imagine if the Brand Split was done last year at this time, and then suddenly one top name goes down (Cena), then a popular vet (Orton), then a workhorse champ (Rollins) then a superstar in the midcard (Cesaro), then a top utility heel (Wyatt), etc. It would have killed everything. They need more talent.

3) Which brings us to a possible solution to both problems: If they don’t want to split the WWE title, and if they need more talent, then why not just re-brand Smackdown and turn it into “NXT.” Bring up Joe, Bayley, American Alpha, and all the big names. That gives you a new “World” Title that is of a different brand entirely (WWE Championship on Monday Nights, NXT Championship on Tuesday Nights), gives the Tuesday night show a built-in identity with fans who already know what to expect from NXT (only now they get two hours a week live, instead of one hour a week taped). The WWE Network version of NXT can remain; it doesn’t have to go away. Just bring the show back to its roots, when it wasn’t the showcase for indie darlings, but was a place for developing stars to appear and get their sea legs before getting called up to the main roster.

I don’t know if that’s what WWE has planned (though it is ominous that the next Takeover is subtitled: “The End”) but I do know the opportunities for a successful brand-split are there. It will require Vince McMahon to let go of the wheel a little bit, to think a little more “long term” than he has in the past, and to trust someone else to manage half of his TV empire. If he does, this whole thing just might take off and soar.