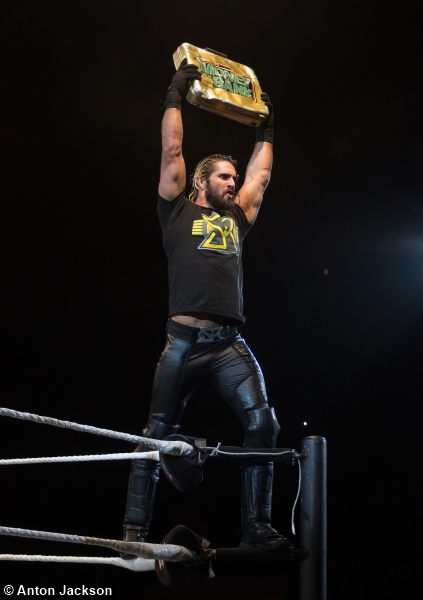 The seventh annual WWE Money-in-the-Bank will come to you, live on the WWE Network, this Sunday night, June 19, at 8/7c from the T-Mobile Arena in Las Vegas, NV. In addition to the annual Money-in-the-Bank Ladder Match, the WWE World Heavyweight, WWE Tag Team, and United States Titles will be on the line as well as the first ever match between John Cena and AJ Styles and a women’s tag match. Here is the final card for WWE Money-in-the-Bank 2016:

The WWE Money-in-the-Bank Kickoff will air exclusively on the WWE Network an hour before the main pay-per-view at 7/6c and, in addition to analysis from the Kickoff Panel, the Kickoff will also feature The Golden Truth vs. Breezango and The Lucha Dragons vs. The Dudley Boyz.

In the Fatal 4-Way Tag Match for the WWE Tag Team Titles, two of the eight Superstars, regardless of their team, will be legally able to compete in the match at a time. Either Superstar can tag out to anyone on the ring apron, no matter if they are their teammate or not. The match can only end by pinfall or submission in the ring with no disqualifications and no count-outs.

What do you think of the final WWE Money-in-the-Bank card? Post your comments in the box below.