Children of the 80’s know Pee Wee Herman, not as a punchline or a weirdo, but as an icon of Saturday morning programming. His “Pee Wee’s Playhouse” was as a staple of mine growing up, along with The Bugs Bunny and Tweety Show, Garfield and Friends and Muppet Babies. There are others but I don’t want to write a thousand words on the joys of Slimer and the Real Ghostbusters or Teenage Mutant Ninja Turtles.  This isn’t about those other shows that raised me as a child. This is about the oddball manchild Pee Wee Herman.

Again, if you weren’t a child in the 80’s, to you Pee Wee Herman is just a weirdo. But for us who grew up with him, it was perfectly normal. When you grow up with something you don’t stop to ask questions; you just accept things at face value. It’s only when you look back that you can see whatever oddities may have been present in your younger years, but even then we tend to look back on our past with rose-colored glasses.

You may watch this and just laugh and laugh. On the other hand you may think it’s the dumbest thing ever. If you “get it,” no explanation necessary; if you don’t get it, no explanation will suffice. But this is Herman at his most Pee Weeist. Slightly manic, hyper in a childlike way, with an inflection in his voice that’s all his own. It’s this throaty, surfer-dude kind of way of speaking, that jumps from high pitch froggy, to low key sarcastic, to super high pitch euphoric. It’s one of a kind.

Pee Wee dominated the mid-to-late 1980’s, and with the 80’s as probably the most fad-obsessed decade of the American 20th century, for him to stand out shows the real skill he had in connecting his character to his audience. The peak, in my opinion, was his first movie, Pee Wee’s Big Adventure. It’s a lightning-in-a-bottle sort of film that sees everyone involved in the midst of their creative zenith. There’s peak Tim Burton (the director), at his quirkiest. There’s peak Danny Elfman (the composer), able to create big memorable scores with subtle motifs. There’s peak Phil Hartman (the writer) who worked with Paul Reubens (Pee Wee himself) to find just the right balance of whimsy and edge. Herman’s hot streak continued in the 80’s with HBO specials, and his aforementioned childrens show on CBS.

But when the 1990’s hit, the fad dwindled, and of course, Reubens became famous for all the wrong reasons. After the scandal ended his TV show, Pee Wee went on hiatus for the rest of the decade. He returned here and there, mostly for ironic cheers at an awards show or in the middle of a music video, but during that time there were rumors that he was thinking of a comeback. Enough time had passed that outrage had given place to forgiveness and forgetfulness, and nostalgia had started to take hold around the fads of the 1980’s.

Which brings us to Pee Wee’s Big Holiday, Reubens’ newest Pee Wee Herman release, exclusively on Netflix. Here is a movie that not only assumes you have a soft spot for Herman, but is counting on it. Its success as a film depends on it. So I have to admit I’m a sucker for the guy and totally understand how someone who didn’t grow up with Globey, Chairry and Mr. Kite is not going to get a lot out of the movie. In fact you may hate it. But that’s just the way a property like this goes. 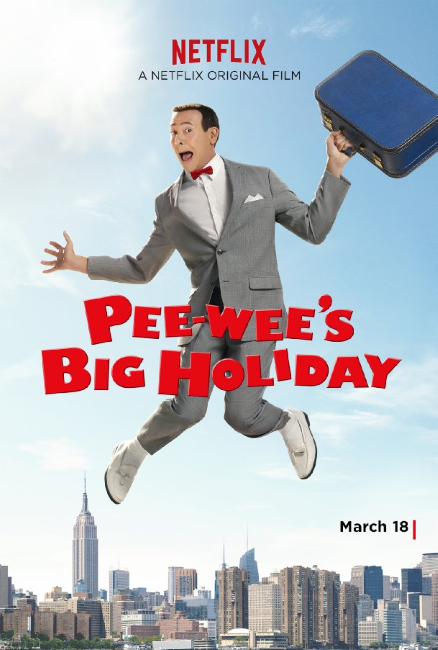 To start with, Reubens looks amazing. I mean there’s a lot of make up involved, and even some unorthodox techniques were used to keep him looking like he did in 1985…

…but put that aside: The man is SIXTY-TWO years old! He’s old enough to be a grandfather. He looks amazing.

As for the film, the greatest compliment I can give the screenplay is based on what isn’t in the movie. There’s not a single callback to Pee Wee’s Big Adventure (with the exception of the opening Rube-Goldberg device montage, and of course, a role for Diane Salinger). Too many nostalgia projects like this lean heavily on the past, to the point where nothing new is explored. Big Holiday is confident enough in its own material—and in the timeless character at the center—that it doesn’t need to remind you of Large Marge, the Alamo, his red bike, or any other memorable moment from his cult classic 1985 film. There were two moments when Pee Wee steps into a dark room/cave and I was sure we would see white, animated eyes, just as we did in Big Adventure, but they resisted the temptation to callback and let the film forge its own identity. 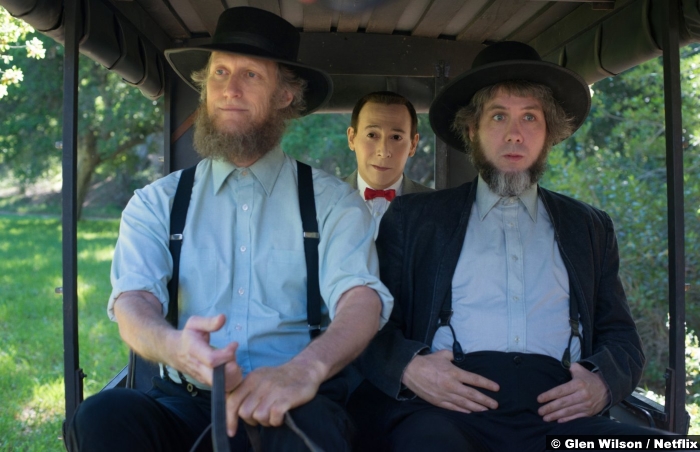 It’s not a perfect movie, however. It really misses the edge that the character had in the 80’s. Pee Wee was always a bit of a sarcastic sassypants (“oh really, where they hosin’ him down!” is one of my favorite lines from any film, ever), but here he never really gets too many opportunities to show that side. And while John Lee’s direction is solid, there isn’t any moment where his own identity is thrust onto the material; that was something Tim Burton was able to do throughout Big Adventure, complimenting Pee Wee perfectly. And more than anything, the movie misses Danny Elfman’s score. It’s like a Superman movie without John Williams’ classic theme (which of course we have these days, and the movies miss it, in my opinion).

But though it has flaws, it also hits so many of the right notes that you don’t mind the little errors here and there. Like Big Adventure, the movie is little more than a series of fragmented scenes, connected by a singular plot-thread. It’s a lot like Monty Python and the Holy Grail, though not that fragmented. Some of these scenes are only okay, while others are side-splitting hilarious. One section in particular involves Pee Wee coming across a farm house, a farmer, and his nine man-hungry daughters. Another involves a balloon gag in the midst of an Amish community. There’s nothing revolutionary about the jokes; they just land.

After so many years of being deprived new Pee Wee Herman material, I received this new movie with bits of excitement and nervousness. If you’re not a child of the 1980’s and if Pee Wee was never something you understood, then at least I applaud you for reading a thousand words about him. If you’re a fan of the character as I am, then rejoice. 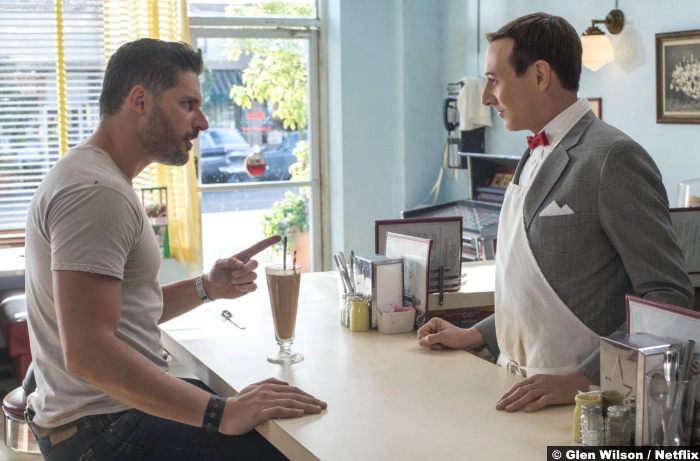 9/10 – Some jokes are funnier than others but the ones that land, are sublime. This is Pee Wee like he never left us. And hopefully he never leaves us again.