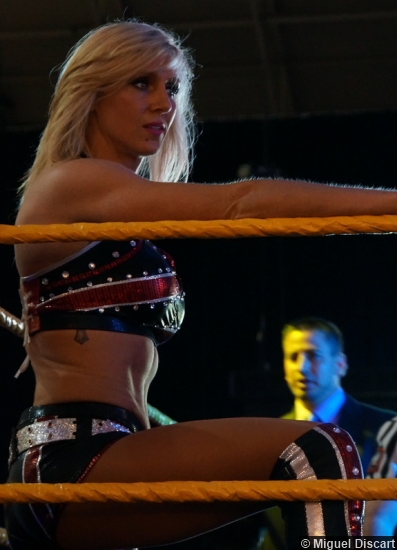 After losing to The Dudley Boyz on RAW, the WWE Tag Team Champions kick off SmackDown as The New Day make their way to the ring with protest signs with a bubble-wrapped table propped up in the corner. Kofi Kingston says that they would not be where they are today if it was not for “good, hardworking tables” before Xavier Woods says that tables “bring people together”, using historical moments as examples before saying that they signed their WWE contracts while sitting at a table. Big E then says that The Dudley Boyz have “no regard” for the table’s place in history before asking the fans to stand up and show their support for the “save the tables” movement before trying to lead the fans in a “save the tables” chant. However, The New Day’s ridiculousness is interrupted by The Dudley Boyz as D-Von Dudley says that there is one moment with a table that The New Day forgot to mention, showing footage from their return two weeks ago when they put Xavier Woods through a table. Bubba Ray Dudley then says that “history repeats itself” and they will beat The New Day again just like they did on RAW and they will take the titles from The New Day and become ten-time WWE Tag Team Champions. This brings out former champions The Prime Time Players as Titus O’Neil says that you have to “earn your keep” and they have done more than earn their keep, saying that they have their rematch clause for the tag titles so that means that The Dudley Boyz have to go to “the back of the line”! Bubba Ray responds by asking The Prime Time Players if they know who they are before saying that they show up, put people through the tables, and win championships. The Prime Time Players then enter the ring to confront The Dudley Boyz and an impromptu match is made between the two teams!

The opening match of the night would see The Dudley Boyz face The Prime Time Players in tag team action with WWE Tag Team Champions The New Day guests on commentary. In the end, it was The Dudley Boyz hitting the 3-D on Titus O’Neil with D-Von pinning Titus for the win. After the match, Big E & Xavier Woods would escape with the table while Kofi Kingston slaps D-Von on the back of the head, quickly leaving the ring.

Backstage, The New Day’s celebration over getting the better of The Dudley Boyz is ruined when Renee Young informs the WWE Tag Team Champions that they have match later tonight against Dean Ambrose & Roman Reigns!

In the renewal of their rivalry, “The Man That Gravity Forgot” Neville was set to go one-on-one with “The Prince of Dark Matter” Stardust on SmackDown, but during Neville’s entrance, he is ambushed by The Ascension as Neville is blasted in the face with a big boot before getting rolled into the ring. Stardust then grabs a microphone, telling Neville that he has been flying “too close to the sun” before introducing him to his new cohorts, The Ascension. Stardust then backs away as The Ascension hits the Fall of Man on the high-flyer before Stardust tells Neville “welcome to the cosmic wasteland”!

After losing to Kevin Owens in their SummerSlam rematch on RAW, Cesaro, with taped-up ribs following the match on RAW, would look to rebound on SmackDown as “The Swiss Superman” would go one-on-one with “Mr. Money-in-the-Bank” Sheamus. Naturally, Sheamus would target the injured ribs throughout the match, but Cesaro would manage to hold his own. However, when the referee has to pull Cesaro off of Sheamus in the corner, “Mr. Money-in-the-Bank” would take advantage, hitting the Brogue Kick and pinning Cesaro for the win, capping off a bad week for “The Swiss Superman”.

Then it was time for Miz TV as The Miz would welcome Dolph Ziggler & Lana as his guests to discuss the relationship problems that were caused by Summer Rae on RAW. However, before bringing out his scheduled guests, The Miz brings Summer Rae out to the ring as Rusev’s girlfriend makes her way to the ring. Summer says that what happened on RAW was exactly what she said before admitting that she “lied”. The Miz says that he is “shocked” before Summer reveals that everything she said was true, but there is more to the story than what she told on RAW. At the urging of The Miz, Summer Rae claims that Dolph kissed her in his locker room and it instantly went from “passion” to “guilt” before Summer builds up some tears during her explanation. This brings Dolph Ziggler & Lana to the ring as The Miz asks everyone to stay calm. Dolph says that no one is “buying” what Summer is saying, saying that they “trust each other” before Summer interrupts, telling Lana to not be “naïve”, claiming that she and Dolph have had an on-again, off-again relationship for a while, saying that the “chemistry” between them is “undeniable”. Dolph says that the only thing that is between him and Summer is a “restraining order”, which leads to Summer Rae showing footage from June of last year where Summer kissed Dolph on RAW and Dolph responded with a kiss of his own. This sends Lana over the edge as Lana attacks Summer Rae before Dolph pulls Lana off of Summer and Lana shoves Dolph away, storming out of the ring! Dolph follows Lana to the back as Summer screams at Lana.

In the renewal of an old rivalry between the two, SmackDown would see R-Truth square off with Bo Dallas. The match would start with R-Truth laughing at Bo Dallas’ beating at the hands of Brock Lesnar a couple of weeks ago and this would fire Bo up as Dallas would hit a suspended neckbreaker, pinning R-Truth for the win. After the match, a furious Bo Dallas would pick R-Truth up, delivering a second neckbreaker to Truth.

Backstage, an interview with Team PCB is interrupted by Team Bella as Divas Champion Nikki Bella confronts her #1 Contender at Night of Champions, Charlotte, again bragging about coming close to becoming the longest reigning Divas Champion in history. Charlotte responds by informing Nikki that she put in a petition to The Authority to have their Divas Title match before Nikki Bella becomes the longest reigning champion on September 14! This enrages the Divas Champion who says that Charlotte cannot do that, but Charlotte argues that she can and she did, saying that, if The Authority approves the petition, then she will take Nikki’s title away and take her historic reign as champion away too.

After winning the Beat The Clock Challenge on RAW to become the new #1 Contender for the Divas Championship, Team PCB’s Charlotte, with Paige & Becky Lynch in her corner, would face Team B.A.D.’s Tamina, with Naomi & Sasha Banks in her corner. In the end, it was Charlotte hitting her snapmare maneuver called Natural Selection, pinning Tamina for the win. Team PCB’s celebration is then interrupted by Team Bella, who comes out to the stage to show the Bella Tron as a little over eleven days remain before Nikki Bella becomes the longest reigning Divas Champion of all-time.

Then it was time for the main event as, after both Superstars were absolutely dismantled by The Wyatt Family’s Braun Strowman for the second week in a row on RAW, Dean Ambrose & Roman Reigns would be looking to rebound from the beating as “The Lunatic Fringe” and “The Big Dog” would face two-thirds of the WWE Tag Team Champions Big E & Kofi Kingston, with Xavier Woods in their corner, in a non-title match. At the end of a hard-fought match, Roman Reigns would catch Kofi Kingston in mid-air with the Superman Punch, but when Roman goes for the pin, Xavier Woods gets involved, ending the match by disqualification. After the match, Dean Ambrose would take Xavier Woods out with Dirty Deeds before Roman Reigns blasts Big E with the Spear. Ambrose & Reigns then lift Xavier Woods up, planting him with a two-man Powerbomb in the middle of the ring! Ambrose then grabs a microphone, telling that Roman that he’s not done yet, saying he wants another shot at Braun Strowman. Roman then asks the crowd if they want to see more before calling out The Wyatt Family! However, The Wyatt Family would appear on the Tron as Bray Wyatt says that this is his “game”, saying that Ambrose & Reigns are “outnumbered” and “vulnerable”, telling Ambrose & Reigns that they will face them at Night of Champions. Wyatt continues, saying that the “apocalypse” walks before them in the form of a “black sheep” as Braun Strowman takes off his black sheep mask, exposing his demonic face as he tells Ambrose & Reigns to “run”.