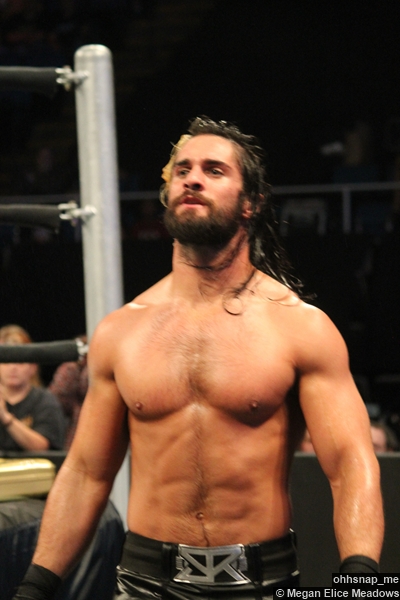 With his title belt still in the possession of Dean Ambrose, SmackDown kicks off with WWE World Heavyweight Champion Seth Rollins, who makes his way to the ring by himself, bringing a steel chair with him into the ring. The champion says that, about a year ago, he took a steel chair and destroyed The Shield and, ever since then, people have been asking him why he destroyed what he “created”. Rollins continues, saying that, since day one, he has set out to be “the best” in WWE and he was tired of sharing the spotlight and he was the only one willing to “pull the trigger”, betraying The Shield and joining up with The Authority. Rollins then says that he won the Money-in-the-Bank contract by himself and he had a vision shortly after the Royal Rumble to beat both Brock Lesnar and Roman Reigns at WrestleMania, saying that it took the “heart of a champion” and he crushed the dreams of Roman Reigns and “slayed the beast” Brock Lesnar at the same time. Rollins continues, saying that Brock Lesnar is off somewhere “licking his wounds” and Roman Reigns is living in his “shadow” trying to “recreate” what Rollins did. The champion then says that he is the “greatest WWE World Heavyweight Champion of all-time” and he’s got no title belt around his waist.

Rollins then addresses Dean Ambrose, saying that everyone knows who the “rightful champion” is and he doesn’t need “anyone or anything” to validate who he is and what he is capable of. Rollins continues, saying that he appreciates what The Authority has done for him, but he does not need The Authority to “destroy” Dean Ambrose. Rollins then vows that, a week from Sunday at Money-in-the-Bank, he will climb the ladder and retrieve his title belt. Dean Ambrose then interrupts, appearing on the Tron, telling Seth Rollins that if there is one lie he hates more than any other, it’s that Rollins still claims to be the WWE World Heavyweight Champion when he pinned Rollins in the middle of the ring at WWE Elimination Chamber. Ambrose says that The Authority will do whatever it takes to make sure that they will never lose their grip on the WWE World Heavyweight Championship, saying that, for the past year, he has had to watch his back for The Authority and that has made him “stronger”. Ambrose continues, saying that he climbed to the “top of the mountain” at WWE Elimination Chamber and, if Rollins wants the title, he is going to have to climb a ladder and take it. Ambrose then claims that he is the “rightful” WWE World Heavyweight Champion and he will walk out of Money-in-the-Bank as the champion or he will “die trying”.

After being challenged for his newly acquired gold by Big Show on RAW, the new Intercontinental Champion was in action on SmackDown as Ryback would go one-on-one with Stardust in a non-title match. In the end, it was Ryback hitting Shell Shocked on Stardust, pinning Stardust to pick up the win.

After The Bella Twins used Twin Magic to cheat Paige out of the Divas Championship on RAW, Paige would appear on SmackDown for an interview with Renee Young. Paige says that The Bella Twins have been doing Twin Magic for years and while they make it seem like they are in favor of giving Divas a “chance”, The Bella Twins are the ones holding the Divas division back. Paige continues, saying that The Bella Twins have had the “spotlight” since they arrived in WWE and their life is about living their “celebrity lifestyle”. Paige then says that, if you don’t like the world you live in, then you have the power to change it, saying that it looks like she is going to have to “change it”.

Following a win for the ages over John Cena at WWE Elimination Chamber, NXT Champion Kevin Owens would make an appearance on SmackDown to hold his own open challenge for the NXT Championship. Owens says that, after this past Sunday night, they all know who he is, saying that he’s the guy who defeated John Cena in his very first match on the main roster. The champion then says that everyone knows who he is and what he’s about with the exception of John Cena, saying that Cena seems to think that Owens is a Cena fan. Owens continues, saying that he heard the “emotion” in Cena’s voice on RAW and he realized that Cena is “delusional”, saying that he cannot let his son be in awe of someone who is so disconnected from reality. The NXT Champion then says that someone needs to put an end to the “corruption” of the young fans at the hands of John Cena and, at Money-in-the-Bank, he is going to show the world what a “real man” looks like. Owens then says that, if there is anyone in the back who thinks that they can beat the guy who beat John Cena, then they should “come get some”, mocking John Cena.

The two premiere high-flyers in the upcoming Money-in-the-Bank Ladder Match would square off on SmackDown as “The Man That Gravity Forgot” Neville went one-on-one with one-third of the WWE Tag Team Champions, Kofi Kingston, with Big E & Xavier Woods in his corner. Despite Big E & Xavier Woods’ best efforts to cost Neville the match, Neville would thwart the interference, countering an attempt at a roll-up to secure the three-count, picking up the win over Kofi Kingston.

The Miz would then appear on SmackDown for the latest edition of Miz TV as the self-proclaimed “A-Lister” would welcome Lana to Miz TV. The Miz asks Lana how she can just “abandon” Rusev in his time of need and Lana says that Rusev did not “respect” her, so he does not “deserve” her. The Miz sarcastically applauds Lana, accusing Lana of using Rusev then casting him aside when he got injured. Lana says that she really did care for Rusev, but his “erratic behavior” and “blatant lies” led her to do what she did. Lana then says that The Miz’s line of questioning is going to result in her either leaving Miz TV or a slap to the face for The Miz. The Miz then says that he has a surprise guest, bringing the injured Rusev to the ring! Rusev would make his way to the ring on crutches, saying that he is not there to “start trouble”, he is there as a “broken man”. Rusev then says that he was raised differently, saying that he honestly didn’t think he needed Lana, saying that America has “embraced” Lana and America is all about “second chances”, saying that all he is asking for from Lana is a “second chance”. Rusev then puts his crutches aside and begs Lana to be his “crutch”, but Lana tells Rusev that she’s got somewhere where Rusev can put his crutches. Rusev then sheds his apparent act, screaming at Lana and calling her a “stupid woman” before Dolph Ziggler comes out to protect his love interest. Ziggler enters the ring to escort Lana from the ring and away from an infuriated Rusev, who screams at Lana that she is “worthless” as Dolph & Lana walk to the back together.

Then it was time for the main event as, ten nights before they are part of the Money-in-the-Bank Ladder Match, “The Big Dog” Roman Reigns would go one-on-one with “The Celtic Warrior” Sheamus. Despite still suffering the effects of his three matches on RAW, Roman Reigns would manage to stay in the match before Kane and J&J Security comes out. Despite the presence of Kane and J&J Security, Roman Reigns would catch Sheamus with the Superman Punch but Kane would then enter the ring, hitting a big boot on Reigns for the disqualification. The Director of Operations then goes for a chokeslam on Reigns, but Roman would fight out only to be blasted with the Brogue Kick by Sheamus. In an unexpected turn of events, Kane would then grab Sheamus by the throat, delivering a chokeslam to “The Celtic Warrior”! Kane then grabs a microphone, revealing that he is the final Superstar in the Money-in-the-Bank Ladder Match! Kane then delivers a chokeslam to Roman Reigns as Kane stands tall in the ring, looking up at the Money-in-the-Bank briefcase that hangs high above the ring.