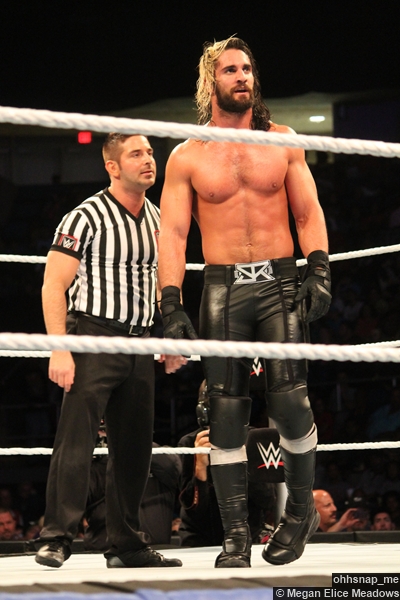 The 827th edition of WWE Thursday Night SmackDown came to you from the Huntington Center in Toledo, OH. On RAW, an apology from WWE World Heavyweight Champion Seth Rollins led to Kane and J&J Security reuniting with the champion and, together, the reunited Authority did the unthinkable by orchestrating a vicious beat down of “The Beast” Brock Lesnar, leaving the dangerous #1 Contender laid out in the middle of the ring! With the “band back together”, SmackDown would kick off with The Authority as WWE World Heavyweight Champion Seth Rollins will no doubt be in a celebratory mood following the events of RAW. What will The Authority have to say on SmackDown about rejoining the champion? What will Seth Rollins have to say now that he seemingly holds the advantage over Brock Lesnar heading into Battleground in less than three weeks?

When Sheamus returned to WWE a few months ago, one of his first targets was Dolph Ziggler and “The Celtic Warrior” and “The Showoff” engaged in a rivalry for the ages that saw both men being forced to kiss the “arse” of their adversary and, on SmackDown, their rivalry would be renewed as “The Showoff” Dolph Ziggler would go one-on-one with “Mr. Money-in-the-Bank” Sheamus in what promises to be a physical war. Which Superstar will emerge victorious? Can Dolph Ziggler overcome the aggressive “Mr. Money-in-the-Bank” or will Sheamus take a step towards becoming unstoppable in his quest for the WWE World Heavyweight Championship?