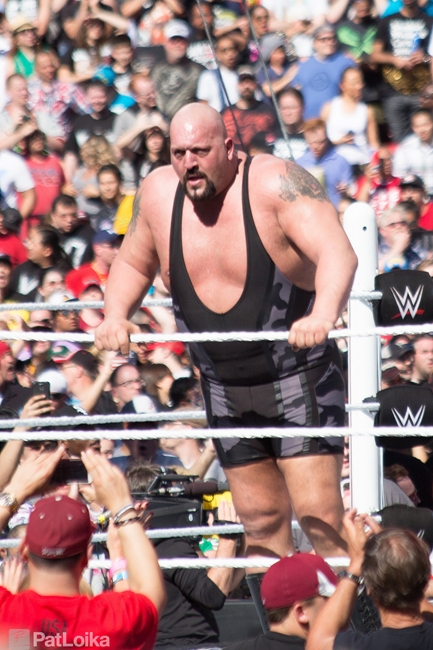 After reuniting with Kane and J&J Security to leave Brock Lesnar lying at their feet on RAW, SmackDown would kick off with The Authority as WWE World Heavyweight Champion Seth Rollins would make his way to the ring with Director of Operations Kane and one-half of J&J Security Joey Mercury in tow. The champion says that they took a trip to “Suplex City” on RAW and they “burned it to the ground”. Rollins then says that he made the “change that was necessary” to destroy The Shield and, now, he is the WWE World Heavyweight Champion and he is surrounded by true “brothers”. Rollins continues, saying that Joey Mercury is a “genius”, saying that Mercury was the “mastermind” behind the beat down on Brock Lesnar on RAW. The champion then addresses the missing Jamie Noble, saying that, as a result of Brock Lesnar sending him into the ringside barricade on RAW, Jamie Noble suffered three broken ribs and is unable to be with them on SmackDown. Rollins then declares that tonight’s SmackDown is “dedicated to the courageous Jamie Noble.” Rollins then says that Kane was an integral part in taking down Brock Lesnar on RAW and, in addition, Kane also delivered a huge chokeslam to Dean Ambrose, saying that, no matter what, Kane will always be the “devil’s favorite demon”. The Director of Operations says that, if you cross a united Authority, then you will face the “consequences”. Kane then addresses The Authority’s “extended family” member, saying that Big Show cannot be with them tonight because of the brawl with Ryback on RAW that ended with Big Show laid out on the concrete floor.

Kane then calls Intercontinental Champion Ryback to the ring and “The Big Guy” makes his way to the ring to confront The Authority. Kane asks for an explanation from Ryback and Ryback says that Big Show wanted to see what he could do, so he showed him. Rollins then says that, if Ryback wants to see how a “champion should act”, then he should take some lessons from Seth Rollins. Ryback says that there is a difference between a “champion” and a “sellout”, saying that a sellout “runs and hides” while a champion stands by the fans each and every night. Ryback continues, saying that he wished that Dean Ambrose would have won the title at Money-in-the-Bank because then they would have a “real champion” instead of a “gutless child” like Seth Rollins. Kane then says that Ryback will get the opportunity to prove what a real champion looks like when Ryback goes one-on-one with Kane himself! The Authority then exits the ring, but Seth Rollins decides that he has more to say, saying that he “annihilated” Dean Ambrose at Money-in-the-Bank. The champion then says that, since Ambrose is still walking around, he is going to go one-on-one with Ambrose tonight, saying that The Authority “always wins”!

The opening match of the night would see two former rivals square off as “The Showoff” Dolph Ziggler, with Lana in his corner, would go one-on-one with “Mr. Money-in-the-Bank” Sheamus. Early on in the match, Rusev would make his way out to ringside, again begging Lana to take him back, but Lana would defiantly turn her back and walk back to ringside as Rusev curses in Bulgarian. Meanwhile, in the ring, Sheamus takes advantage of the distraction caused by Rusev. In the end, Dolph Ziggler was hung up on the top rope and Sheamus would capitalize with the Brogue Kick, pinning “The Showoff” for the win.

Backstage, an angry Rusev is beside himself over being rejected by Lana before Summer Rae puts her hand on Rusev’s shoulder, telling Rusev that Lana is “not worth it”.

With The Bella Twins in her corner, Alicia Fox would go one-on-one with Naomi, with Tamina in her corner. During the match, a confrontation between Naomi and The Bella Twins would result in Tamina blasting Brie Bella with a super kick. Nikki Bella would then tackle Tamina, but Naomi would pull the Divas Champion off of Tamina, holding Nikki as Tamina blasts Nikki with a super kick, as well. Meanwhile, in the ring, Alicia Fox would hit an armbar facebuster maneuver on Naomi, pinning Naomi for the win.

Less than three weeks before they defend the WWE Tag Team Titles against The New Day at Battleground, WWE Tag Team Champions The Prime Time Players would join forces with The Lucha Dragons to face The New Day and Bo Dallas in an 8-Man Tag Match. During the match, Sin Cara would dive to the outside, taking out Big E, Kofi Kingston, and Bo Dallas as, in the ring, Kalisto hits a stunning springboard 450 splash, pinning Xavier Woods to pick up the win for his team.

Backstage, Roman Reigns vows to watch Dean Ambrose’s back in the main event before Roman finds a piece of paper in his vest. On the paper are the words “Anyone but you” with a picture of Roman Reigns with the eyes and mouth cut out; another sinister message from Bray Wyatt. Reigns throws the paper down before storming out of his locker room.

Clearly fed up with Bray Wyatt’s mind games, Roman Reigns is searching the backstage area for Bray Wyatt before Roman runs into Kane. The Director of Operations tells Roman has become a “liability” and he has no choice but to eject Roman from the arena! Kane then says that it is his job to maintain a “safe working environment” before Kane instructs security to escort Reigns out of the building. Roman shoves the security before saying that, if he finds Bray Wyatt, it’s “going down” before shoving Kane to the side and storming out of the arena.