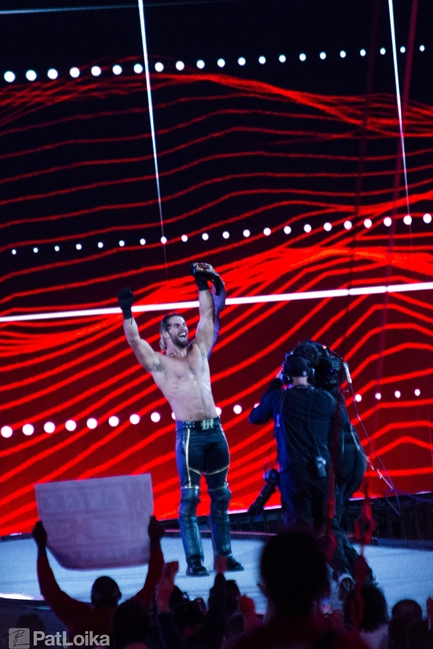 The 1153rd edition of WWE Monday Night RAW came to you, live, from the Bankers Life Fieldhouse in Indianapolis, IN. Last week on RAW, Triple H & Stephanie McMahon unveiled their plan to turn Seth Rollins into the “diamond” they invested in as The Authority reinstated “The Beast” Brock Lesnar and, now, Lesnar will challenge Rollins for the WWE World Heavyweight Championship in four weeks at WWE Battleground! Despite looking like he was about to faint after coming face-to-face with “The Beast” on RAW, the WWE World Heavyweight Champion brought a different attitude when he appeared on SmackDown, vowing to beat Brock Lesnar at Battleground, even going as far as to say that he “can’t wait” to go one-on-one with “The Beast”! Was this change of attitude simply false bravado on the part of the champion or is Seth Rollins truly looking forward to his collision with Brock Lesnar?

This past Thursday on SmackDown, Bray Wyatt continued to play mind games with his Battleground opponent Roman Reigns, costing Roman the win in the main event before leaving Roman mentally shaken in the ring, looking down at a picture of himself and his daughter. The self-proclaimed “New Face of Fear” can certainly play with the minds of his opponents, but it is yet to be proven that Bray will be able to hand the wrath of an angry and protective father. Will Wyatt continue to mentally torment Roman Reigns on RAW or will “The Big Dog” finally get a piece of Bray Wyatt?