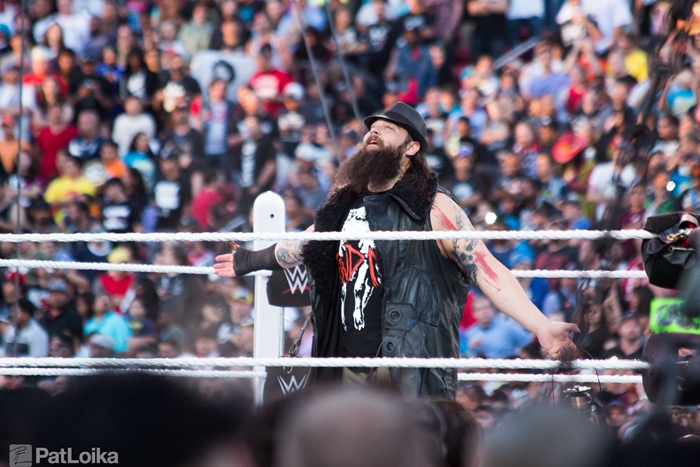 Fresh off of the WWE fans voting to put him in a Triple Threat Match for the WWE World Heavyweight Championship against both Randy Orton and Roman Reigns at Payback, WWE World Heavyweight Champion Seth Rollins confronts Director of Operations Kane before SmackDown officially gets underway. The champion gets in Kane’s face, saying that it’s Kane’s fault that he has to defend his title in a Triple Threat Match at Payback and when Kane says that he thought Rollins was a fighting champion, Rollins claims that he is going to beat both Orton and Reigns at Payback. Rollins then says that Kane is his “problem” and, as Director of Operations, Kane is supposed to do what is “best for business”. Kane argues that what’s “best for business” is giving the fans what they want before Rollins accuses Kane of being “jealous” of Rollins. The champion continues, saying that he’s everything that Kane never was and is everything that Kane never will be. Rollins then says that his star is rising while Kane fades away and Kane says that part of his job is to ensure that Rollins “grows” as a champion and as a person, saying that he is going to make a “man” out of Rollins if it’s the last thing he does. The Director of Operations then says that, tonight, Seth Rollins will go one-on-one with Dean Ambrose, saying that is what’s “best for business”. The frustrated champion says that he thinks is best for business is “Kane from twenty years ago”! Rollins adds that Kane is “irrelevant”, daring Kane to prove that he has any sort of “viability” as a member of The Authority and daring to prove that he has anything left to offer The Authority.

After the fans voted himself and Randy Orton to challenge Seth Rollins for the WWE World Heavyweight Championship in a Triple Threat Match at Payback, SmackDown officially gets underway with Roman Reigns. After wishing Dean Ambrose luck in his match against Seth Rollins, Roman Reigns says that, not only did Seth Rollins destroy The Shield, Rollins took the “greatest opportunity” of Roman’s life away from him at WrestleMania. Roman continues, saying that every fight he is in is the “biggest fight” of his life, telling everyone to wait until they see the fight that he brings to Seth Rollins and Randy Orton. The Authority’s Director of Operations Kane then comes out, putting on elbow pads and calling for a referee, putting himself in an impromptu match against Roman Reigns! After failing to put Roman Reigns away with the chokeslam, Kane would go for the Tombstone Piledriver, but Roman would counter, following it up with the Superman Punch. However, when Reigns goes for the Spear, Kane quickly rolls out of the ring and walks to the back, taking a count-out loss to Roman Reigns.

Having just watched Kane take a count-out loss to Roman Reigns, WWE World Heavyweight Champion Seth Rollins is interviewed backstage. The champion claims that the major difference between himself and Kane is that he “never runs away from a fight”, he finds a way to win the fight “on his own”. Rollins then says that he is going to beat Randy Orton and Roman Reigns at Payback on his own, saying that he doesn’t need anybody but himself!

Mimicking ring announcer Jo-Jo for his own and his opponent’s ring introduction, the new Damien Sandow would go one-on-one with Curtis Axel on SmackDown. In the end, it was Damien Sandow hitting the You’re Welcome, pinning Curtis Axel for the win.

After being attacked by Bray Wyatt on RAW, Ryback would be in action on SmackDown as “The Big Guy” would face Bray Wyatt’s former disciple, Luke Harper. In the end, it was Ryback hitting Shell Shocked, pinning Luke Harper for the win. After the match, Bray Wyatt would appear behind Ryback just like he did on RAW, this time slamming Ryback down and delivering several right hands to the back of Ryback’s head. Bray then picks Ryback up, dropping “The Big Guy” with Sister Abigail before Bray Wyatt briefly glares at his former disciple, Luke Harper, screaming “follow the buzzards”.

Following a confrontation backstage where Nikki Bella stood up for her sister, Brie, the Divas Champion was in action on SmackDown as Nikki Bella went one-on-one with Cameron in a non-title match. In the end, it was Nikki Bella hitting the Rack Attack, pinning Cameron for the win.

Then it was time for the main event as, per the orders of The Authority’s Director of Operations Kane, WWE World Heavyweight Champion Seth Rollins, with J&J Security in his corner, would go one-on-one with “The Lunatic Fringe” Dean Ambrose in a non-title match. During the match, Director of Operations Kane would also make his way to ringside. Later on in the match, Dean Ambrose would send Seth Rollins over the top rope with the champion landing on Kane before Ambrose dives off of the top rope, taking out Kane and J&J Security! Rollins then tosses Ambrose into the ringside barricade before Rollins tries to check on Kane. However, Kane would grab Rollins by the throat before grabbing Ambrose as well! The Director of Operations would then let both men go and, after threatening the referee to avoid a disqualification, Kane is taken out by Ambrose, who sends Kane face-first into the steel ring post.

“The Lunatic Fringe” then sends J&J Security over the announce table, but the distraction would allow Seth Rollins to take advantage as the champion sends Ambrose into the steel steps before bringing Ambrose back into the ring. Rollins then hits his modified DDT on Dean Ambrose, pinning “The Lunatic Fringe” to pick up the win. After the match, Kane would enter the ring, but just when Seth Rollins thought he was in for a beatdown, Kane turns around and starts stomping away at Dean Ambrose! Seth Rollins and J&J Security then joins in, making it a four-on-one assault before Roman Reigns makes the save, taking Kane out with the Superman Punch on the outside before hitting the ring to get a piece of Seth Rollins. Roman gets a few good shots in on Rollins before the champion escapes the ring as Reigns hits the Spear on both members of J&J Security! Kane would then re-enter the ring, grabbing both Roman Reigns and Dean Ambrose, but the two former Shield members are able to counter as Ambrose takes Kane down with a clothesline before Roman Reigns blasts Kane with the Spear! Roman Reigns and Dean Ambrose are then left standing tall in the ring as their fearful former teammate, Seth Rollins, holds the WWE World Heavyweight Title belt high from the safety of the stage.