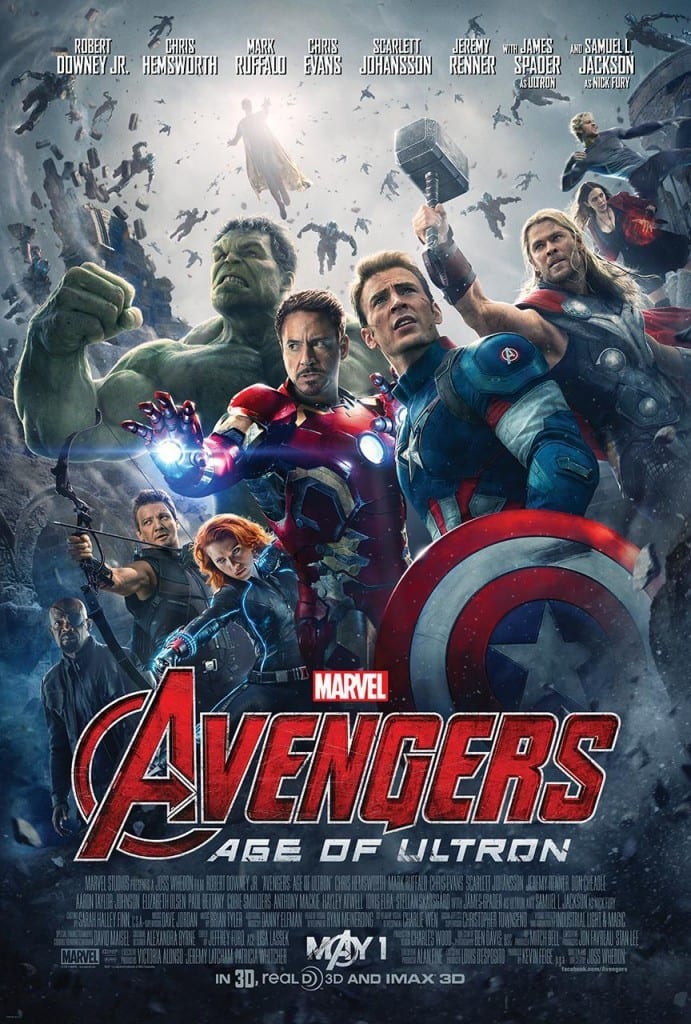 Right now, a few days away from it’s North American release, the second Avengers film is rocking a 73% rating on Rotten Tomatoes. That puts it slightly higher than the consensus for Thor: The Dark World, and right alongside the score for Iron Man 2. For comparison’s sake, the first Avengers film received a 92% score by the review aggregate website.

Unlike with Iron Man 2, where most reviewers agreed that the film was not as strong as the first outing, the reviews for Avengers 2 are more mixed. Some people really liked the film while others were turned off. I’m not going to get into the methodology of some reviewers, nor will I give any bearing to a reviewer who scored the film poorly because they are “burned out” on Marvel movies or because they hadn’t seen the previous entries so they were lost.

This is a new era in movie making. These films aren’t loosely-connected sequels the way “franchises” were done back in the day. This isn’t Batman Returns, where a one-line mention of Vicki Vale was considered a fun little easter egg. This is the era of the “cinematic universe.” It is built on one movie leading into the next, where the audience is expected to keep up with each installment as the pieces are put in place for the semi-regular “big team up” film. Old school reviewers and non-fans are naturally going to be left behind as the movie-series gets bigger and bigger.

But lest you think that’s a bad thing, look at the returns Marvel is getting on their investment. The first two, pre-Avengers Iron Man films grossed (worldwide) 585mm and 623mm respectively. Iron Man 3, coming after The Avengers film, and relying heavily on knowledge of that movie’s plot, grossed over 1 billion at the box office. Thor grossed 450mm, but the sequel–though it received worse reviews than the first–brought in over 640mm. Captain America brought in a respectable 370mm before The Avengers movie. After? Cap 2 pulled in over 700mm. A barely-known Guardians of the Galaxy rode into theaters with nothing but a fun trailer and a connection to the MCU, and it became the number one movie of the year and pulled in 775mm worldwide.

People are not seeing these movies less. The bigger the universe gets, people are seeing them more. The first Avengers is the current box office champ of the MCU, with over 1.5 billion to its name, but reports are that Avengers 2 has pre-ticket sales equaling all previous Marvel movies…COMBINED. This movie is going to blow everything away.

Yet it will probably end up being a middle of the road film, in terms of reviews.

Ultron himself is probably the reason for the disparity in reviews. His performance was shockingly human. He’s much more of a wise-cracking, mustache-twirling, occasionally self-deprecating villain than you would think, both from his appearance and the way he was teased in the trailers. I think a lot of people will go in to this film expecting the big bad to be a killer robot with the Terminator’s personality and instead will discover a killer robot with Loki’s personality. It was very jarring but I was fine with it. I can see it being a turnoff for a lot of reviewers, though. But again, the majority of people who review for magazines and newspapers are so far out of touch with where cinema is headed that their opinions are largely irrelevant these days.

The tone of the movie was about the same as the first one (serious when needed, but rarely serious for long), despite the commercials hinting that this would be much darker. They really teased this movie to be the “Empire Strikes Back” of the “Avengers” series. Again, people will go in expecting one thing and get another. If they can’t accept the movie for what it is, they will probably score it harshly.

As previously alluded, there is zero exposition in the dialogue here. You’re going to have to know your Marvel Cinematic timeline before jumping in if you have any hope of catching any of the offhand comments or understanding half of the roundtable discussions. Personally, I found it refreshing. One thing that bugged me about the recently released teaser for Jurassic World was that literally every line of dialogue spoken in the trailer was exposition. Sometimes the movie has to stop and tell me something, but I much prefer to be shown rather than told. Joss Whedon prefers that too, it seems.

There weren’t as many quiet moments as there were in the first one. There weren’t as many opportunities for the whole gang to stand around and banter. There is the now-famous after-party scene that serves that purpose well, but not nearly enough. There is a stretch, though, almost halfway through the film, when the team takes an unexpected detour to Hawkeye’s home as a way to slow the pace and let the audience catch its breath. It reminded me, of all things, of the break in the action in the original Teenage Mutant Ninja Turtles movie, when they took the injured Ralph to April’s farmhouse. But the time spent here was brief, and there wasn’t much banter to be had.

In the original movie, Hulk was the consensus standout star. In this film, he does get a few great moments, but I don’t think anyone will say he stole the show like last time. Really, the love was spread around evenly enough that everyone got to have a moment in the sun. That’s a real testament to Whedon’s skills, as the cast is double what it was the first go around. The closest the movie had to a show-stealer was The Vision. Unlike Ultron, his reveal was a slow burn, but when he finally appeared it was wonderful.

There were the faintest bits of tension between Iron Man and Captain America, but the friction was largely allowed to resolve by the end of the movie. Still, seeds were planted that will make viewers giddy about Civil War. As for the rest of the team, the movie ended with a lot of unresolved issues, and judging by the schedule of films between now and Infinity War Part One, we may not know the answers until the next time the gang is all back together.

As the movie closes, Hulk, Iron Man and Hawkeye seem to take a momentary hiatus from super heroics. Thor left earth to search for who the big bad (Thanos) is that’s pulling the strings. Expect to see that paid off in Ragnarok. Iron Man hinted at retirement. Hulk disappeared. That left Cap, Vision, Scarlett Witch, Black Widow, Falcon, and War Machine as “The Avengers.” There’s a Civil War looming, is that the team that will stand on one side of the fight? Thanos is out there (teased during a Thor vision, and again in an mid-credits scene) and ultimately the showdown will be between him and Earth’s mightiest heroes. What kind of shape will the good guys be in after the Civil War is over? That’s what Phase Three will reveal.

One thing that was interesting was how quickly they raced through Ultron’s origin. He was mentioned, conceived, and created all in one sequence. There was no buildup, no tension: Just BOOM: Bad guy’s here. That was a necessity, because the movie was jam-packed with plot and there was simply no room for a big origin story. It does make me wish the plot of Iron Man 3 would have covered it and planted the seeds for this movie, the way Loki was used in Thor as a prelude to the first Avengers film.

The opening sequence seemed to serve no more purpose than to start the movie with a bang and introduce Quicksilver and Scarlet Witch. It really had little to do with the overall plot. Sure it brought Loki’s old Infinity Stone into play, but overall it was a prelude to the rest of the movie. The big Iron Man vs Hulk fight was also so detached from the rest of the movie it felt like little more than fan-service thrown out there for cheers. Not complaining though: It was awesome and I cheered. Also awesome was the mini-fight between the Avengers two-thirds of the way through it, as Vision was being finished.

I can’t remember all the great one-liners, but there were a lot. I did love the little moment between Vision and Thor regarding the balance of Mjölnir. Also Hawkeye had a great line about how everyone is throwing magic hammers and iron suits around everywhere and he’s rocking a bow and arrow. Great for Joss Whedon to point out the big criticism everyone had of Hawkeye and Black Widow in the first film.

In the end, your take on this movie will be dependent on how you receive James Spader’s Ultron character and the way he was brought to life by Joss Whedon’s screenplay. If you can accept that he’s an 8 foot tall robot with the personality of…well, James Spader, then you’ll be fine. If you think he’s too “casual friday” to carry out a world-destroying plot, you might not like it.

Personally, I thought Ultron and his movie were great. Avengers 1 felt like a bigger deal, because it was the first one and it was (at the time) such a unique movie experience. It was also an origin story, and as much as people hate origin stories they tend to be looked at favorably when done correctly. The first movie felt like a cinematic take on a never-printed Avengers comic #1-4. This one felt like a collection of Avengers issues #12-16. It lacked a true beginning or ending (that comes, presumably, with the Infinity Wars films).

In that sense, it is like Empire Strikes Back, not in tone, but in layout.

Overall it’s a really good and occasionally great Marvel movie, but not as amazing as Captain America 2 or as pitch-perfect as Guardians of the Galaxy. Those were simply great movies.

Seen the movie? Rate it below…