Boxing is dead, UFC reigns and WWE keeps plugging along

Early estimates are that the May 2nd, Mayweather vs Pacquiao fight (henceforth known as “the fight”) scored over 3 million Pay Per View buys. Whatever the final tally ends up as, it will be the biggest PPV in history, and the biggest fight in boxing in a generation. Reports say that over 300 million dollars in revenue was generated from the event, not only from the $100 price tag to watch at home, but also from the almost six-figure cost to sit at ringside. Strictly in terms of the finances, the whole spectacle of the event was a smash hit. 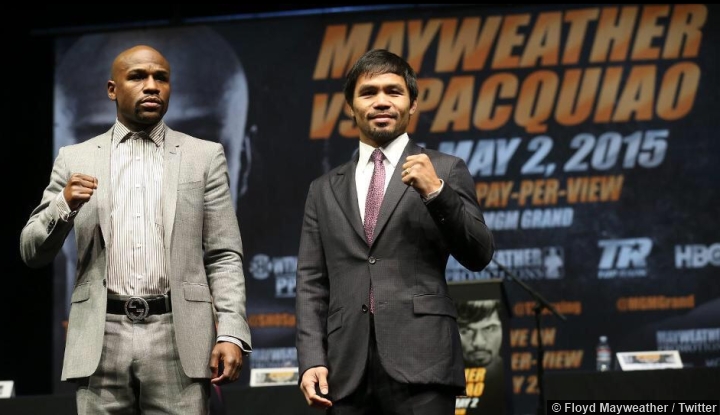 So why is everyone so angry?

There seem to be two camps in the debate: One group says the fight displayed the death of boxing as we know it. The other group says “the numbers don’t lie; people paid crazy money to see it.”

Essentially, one group is worried about the future, and the other is in love with the present.

The number of hardcore boxing fans is almost non-existent in North America. Seasonal sports have taken hold of the US culture, with football especially being the big money maker. Granted, the fight generated more revenue than the last SuperBowl did, but a super fight like that only comes around once a decade (at best); the NFL runs the SuperBowl every year. Long term advantage remains with the NFL.

On the other hand, the fight proved that, with the right conditions, casual fans and even non-fans of boxing would shell out money to see a big bout. The problem comes with how that big bout was perceived. Three-quarters of the audience would consider themselves, at best, casual fans of the sport, knowing only a few key names who presently fight and knowing a few more names from boxing’s days gone by.  They expected what Hollywood boxing movies turned boxing into, a high-drama fight; a slug-fest, a rumble. What they got was a boxing match.

And it wasn’t boxing the way documentaries have portrayed it, where the best of Ali vs Frazier and the best of Tyson vs Holyfield are shown. Celebrities in the crowd, self proclaimed boxing fans at that, were interviewed pre-fight and predicted “a knockout for somebody” and “six or seven rounds of intensity.” Few would settle on a predicted winner, but everyone seemed eager to predict excitement.

Soon after it was over, the world (by way of the internet) had summarized the bout perfectly: 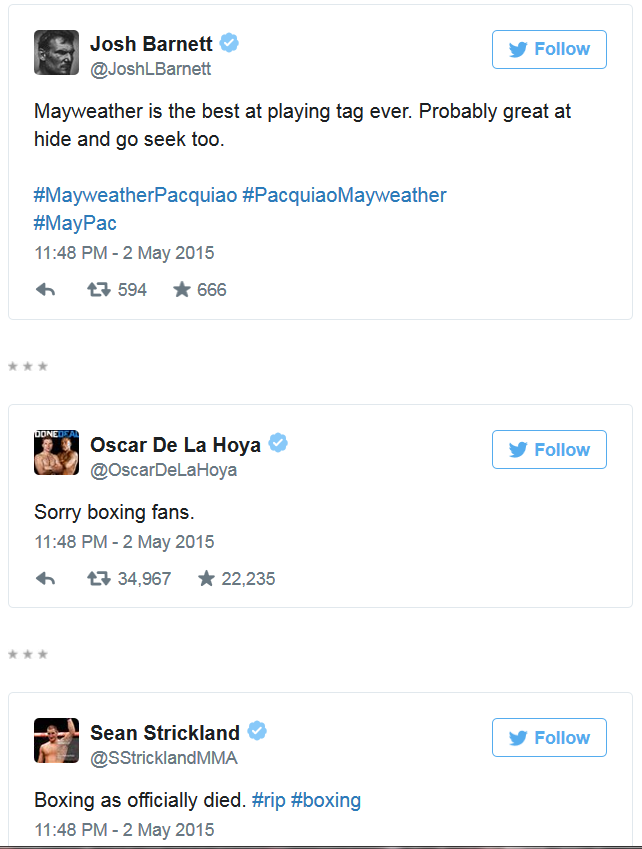 Diehard boxing fans, the dying breed they are, vigorously defended the fight, claiming that these were not heavyweights, so no one should have expected a slug-fest akin to Holyfield vs Tyson.

Fair enough. And yet… 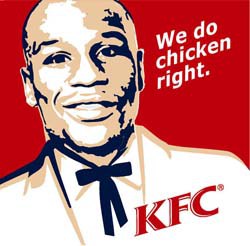 They further argued that the style of Mayweather, reliant on defense and using his long reach to score judge’s points (thus negating any need to go for a knockout), was a tactical strategy that might have been less flashy than what spectators were used to, but was nonetheless effective; he won by unanimous judges decision.

Here’s the problem: People didn’t pay $100 to see Floyd Mayweather (largely cast as the villain of the fight, due to his arrogant demeanor, and woman-beating ways) run from a fight and then win by a judges score; they wanted to see him get knocked out, and barring that, knock out his opponent and live to be hated for another fight.They didn’t pay to see two boxers run from each other and then, when finally in close proximity, fondly embrace in a bro hug.

In the end, the consumers wanted something. And they got….nothing. Neither man, in their post-match interview, even looked like they’d been in a fight. Manny Pacquiao claimed to have fought with an injured shoulder, meaning he got more banged up in training than he did in the actual fight.

You can argue all you want about how “Mayweather did his job; he won the fight by the rules, etc” and you’d be totally right. But does it matter? When you hold up a fight as “the best this sport has to offer” and it fails to entertain, while simultaneously costing you a hundred clams, you can’t really put your nose in the air and talk about the greatness of your sport.

If the best boxing can do is twelve rounds of circling, hugging and weak body shots, then maybe boxing is dead. It’s still a sport, sure. Polo is a sport too. So is Netball. But no one is paying $100 dollars to watch the best Netball has to offer.

And I suspect no one will pay $100 to watch Mayweather vs Pacquiao II either.

Most people said that the real winner of the fight was UFC. They’re probably right. It’s safe to assume a large number of the PPV buyers of the fight also have bought a UFC PPV recently. Boxing purists may look down on the “new blood” UFC fans, and talk up the “art” of boxing, but people don’t pay to watch art; they pay to be entertained. UFC is simply heaps more entertaining than Boxing at this point. The rounds are fewer, the fights more dramatic and the finishes typically more decisive. Sure, UFC has its fair share of judge’s decisions, but the fights themselves are usually so hard-hitting, fans don’t complain about them (very much).  It doesn’t hurt that the shows are about half the price of the $100 disaster boxing just unloaded on the world.

There is another winner in all of this, beyond UFC: The WWE Network.

I’ve written before that WWE has a more inherent advantage to UFC, in that its scripted format subconsciously assures the viewer that he will (probably) get his money’s worth whenever a big match occurs. WWE is able to control the match, determine the ebb and flow of the contest in order to ensure the viewer is taken for a ride and then pay it off with a satisfying conclusion. UFC and Boxing–being “real” sports–are unable to mimic that. UFC has an advantage over boxing in that the actual contest is guaranteed to be exciting, though it can’t promise how long it will last (cough cough, Ronda Rousey), while Boxing can only promote and hype up their fights as big events, playing off the old history and tradition of classic boxing of yore, while being unable to entertain to a level worth the pricetag.

WWE can do all three. It may not have the mainstream appeal of boxing (even if it’s a dormant appeal that only awakens once in a while, when a big fight occurs), and it may not have the “hipness” of UFC, but it can promote (look at WrestleMania’s streak of million+ buys/subscriptions over the past few years) and it can excite (look at the positive buzz the past two WrestleManias achieved) and it can make you feel like you got your money’s worth.

Especially since the most they’re asking folks to pay is…$9.99 per show.

Boxing will never die. In a hundred years we’ll be watching robots slug it out for our amusement. But for the foreseeable future, Mayweather vs Pacquaio probably represented the end of the uber-priced super fight.  UFC has taken boxing’s place as the “fighting sport” where a gladiator can walk out of his arena bloodied and bruised but nonetheless victorious, even if the fight is sometimes hilariously short.

Meanwhile WWE is moseying along, with it’s low price tag and half-hour contests. It guarantees to entertain and give you your money’s worth. It’s the best of everything UFC and Boxing have to offer.