UFC and WWE: On getting your money’s worth… 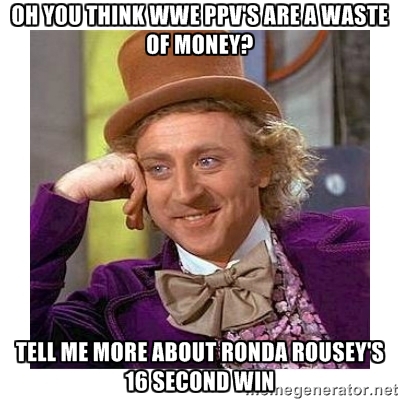 After a night of post-Independence Day fireworks, I gathered with a dozen friends at my house to watch UFC 175. I am what you would call a casual fan of MMA. I know a few of the big names, and if there is a fight that intrigues me I have nothing against sitting down and enjoying it. Of the dozen or so people with me that night, there was one fellow hardcore WWE fan and one casual fan. The casual fan felt about pro wrestling the way I feel about UFC. He knows John Cena and (of course) Brock Lesnar, and some of the big stars of the past (Austin, Rock, Undertaker) but mostly it’s just “guys in their underwear fake fighting.” I never understood the underwear remark, considering MMA guys wear even less clothing. Oh well.

We had our chips and drinks and formed a semi-circle around my screen. The last time a crowd of that size had gathered to watch a big show at my house was early April when we all gathered to watch WrestleMania 30. Keep in mind the common criticism of Pro Wrestling vs. MMA is “one is fake and the other is real.” Yes I know, I would rather the terminology change to “scripted vs. not scripted” but there you go. The other big criticism is the fact that someone would pay $60 to watch a fake sport where the finishes are predetermined. Granted, that argument is now moot with the advent of the WWE Network, but for years this was a huge knock against Pro Wrestling.

As UFC 175 (an event for which people all over the country paid $60) began I observed the mood and energy of the room from an outsider’s perspective. Not being a hardcore UFC guy the opening bouts didn’t offer much interest to me. Funnily enough, they also didn’t seem to offer much interest to the guys who watch UFC regularly. It wasn’t until Urijah Faber (a favorite of a few of my guests) fought that the room turned its full attention to the screen.

Faber won his match in barely a minute. Was it exciting? As exciting as something that lasts “barely a minute” can be. When it was over there was an obvious division in the group. It was unspoken but noticeable to someone playing the role of an observer. The hardcore fans were satisfied; the casual fans felt like they had just started to get revved up when it was over. My initial impression: Hardcore UFC fans are men during sex, casual fans are women during sex. Men are done and spent after a minute; they are satisfied while the other sex is just getting revved up.

This analogy will repeat itself.

With all the attention paid to the Urijah Faber match, my friends and I kept our focus on the next two matches. Both ended in a draw and thus the decision was handed to the judges. “It’s so subjective” a casual fan noted. I couldn’t help but find it ironic, that Pro Wrestling gets criticized for relying on writers to book the finishes of a fake fight, whereas UFC relies on judges to subjectively determine the finishes of a real fight. At least Pro Wrestling is consistent.

Finally came the fights I was actually excited for. The final two bouts of the night featured Ronda Rousey and Chris Weidman defending their respective titles. Rousey in particular was the contest I was excited to see as she was one of a handful of UFC fighters I knew (her being an avid pro wrestling fan probably helped).

Sixteen seconds later, however, Rousey had won the match.

Sixteen seconds. The entire contest was able to be condensed into .gif form. That’s how quick it was.

Was it exciting? It was sixteen seconds.

Was it surprising? It was sixteen seconds.

Was it worth sixty dollars? It was sixteen seconds.

I wasn’t even sure what I was so upset over. Was it the fact that I was all excited for a contest that ended up taking less time to finish than it does the average mammal to pee? Was it the fact this was the one UFC fighter I knew more than anyone else on the card and she was in and out in less time that it’s taken me to write this sentence. I have the gif playing along side my typing. I have now watched her win the match nine times…now ten.

I understand this is the price you pay when you watch a “shoot fight.” The “risk” (for lack of a better word) is always going to be there for a quick knockout or a sudden submission. But still.

At least there was the main event. Chris Weidman vs  Lyoto Machida had a very pro wrestling pre-fight feel. Weidman fought for the honor of the USA and Machida draped himself in Brazilian pride. It was the kind of overly simplified, jingo-infused pageantry that makes the Swagger vs Rusev feud so fun and mildly embarrassing at the same time.

Unlike Rousey vs Davis, this fight lasted longer than the time it takes for Ultimate Warrior to enter the ring. The problem, alas, was that it took too much time. It went all five rounds and ended with a decision by the judges. How…unfulfilling. To get me all worked up and into it and then stop cold turkey right as I’m about to explode. Sorry…analogies…

Again, I understand that such is part of the UFC experience, but I couldn’t help but view the show through the eyes of a Pro Wrestling fan (much the same way UFC fans watch the occasional WWE PPV through the eyes of an MMA fan). I tried to think of some other big PPV matches that ended in such a cheap way, and a few came to mind in no particular order.

I recall Kurt Angle and Steve Austin having a white hot feud that culminated in a WWF Championship match at Summerslam 2001. The match ended in a DQ when a crooked ref rang the bell in order to help the heel champ retain the belt. I paid 40 bucks for that show. I felt cheated and it was only the number TWO match on the card. I celebrated hard when Rock took home the WCW title at the end of the night, though.

I remember when Triple H retained the WWF Championship in the main event of WrestleMania 2000. But at least Rock gave Steph a Rock Bottom/People’s Elbow. I was angry but at least I had a happy moment to go home to, and of course I knew eventually Rock would get the win.

I remember when Daniel Bryan got screwed by Triple H out of the WWE title at SummerSlam 2013. I was angry and felt cheated and in subsequent months I continued to feel angry and cheated. So did a lot of fans who stopped buying PPVs in late 2013 because of the rash of bad finishes. It had a happy ending at WrestleMania 30, however.

Which brings me full-circle.  I had a big crowd on hand to watch WrestleMania 30 and though there was some chuckling from non-fans at the silliness of it all, the one thing everyone got was their money’s worth. Nevermind the fact that I only had to pay 10 dollars; that show was well worth the old $60 bill. The only big matches that didn’t deliver as expected were Cena vs Wyatt (which delivered a killer match with a bad finish) and Undertaker vs Lesnar (which had the memorable finish but a sloppy match). Still, I felt like I was rewarded for investing money to watch the event.

I didn’t feel that way about UFC 175, with its two big matches both disappointing in different ways. The women’s match that ended in a blink, and the top fight that had all the drama and competition you want in a main event but lacked any proper resolution that you need in a “television” event.

So please go ahead and mock my love of a “fake sport.” Mock how it is scripted and how the finishes are predetermined.  I’ll just be here, paying a sixth of the price to watch three times as much action, mayhem and drama unfold in a scripted setting where I am guaranteed to be taken for a thrill ride with a finish that, I may not always agree with, but at least I know there was a creative reason for its happening.

You can have your sixteen seconds and your judges decisions. I’ll take my 20 minutes of back and forth athleticism, near falls and exhilarating finishes any day of the week (and way more than twice on Sundays).

(only two seconds longer, but it generated an emotional response that lasted for YEARS, and is still being felt today)