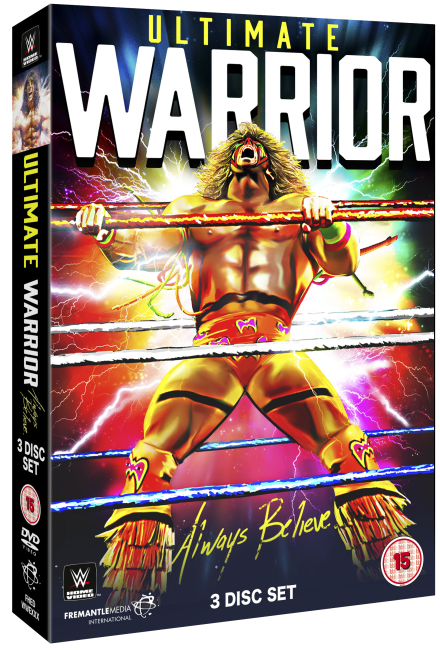 If you bought last year’s Ultimate Warrior – The Ultimate Collection, this is a fantastic companion piece to that release, although a lot of the Warrior talking-head footage comes from that set. Of course, it was impossible to get new footage, but even the repeated comments are welcome and the other talking-heads compliment it with their own input.

The first disc is a documentary and something that WWE’s excellent production crew excel at. Opening with a very poignant speech from Dana Warrior, it runs through the man’s career with comments from Warrior himself along with Hogan, Sting, Vince, Triple H, Stephanie, Linda and a host of the current roster.

As with the previous DVD, it’s obvious on the candid behind-the-scenes segments how much it meant to Warrior to return home and bury the hatchet with virtually everyone he had previous issue(s) with. It’s also obvious to see how much it meant to everyone else to have him there for what turned out to be the last few days of his life.

The pride in his family and the pride they had in him in return leaps from the screen and footage of current day stars being in genuine awe at meeting him backstage (“I was a huge Warrior fan” was repeated over and over again… and not once did it seem false flattery). The part where Sheamus meets Warrior for the first time and is taken aback when Warrior immediately compliments the Irishman on his look and his style was great and another example of how genuine Warrior was in his comments.

There are two main differences between this collection and the previous release; The Ultimate Collection almost seemed like an apology for The Self-Destruction and, of course, Warrior was alive when it was put together.

Because of this, there are a lot of sentimental comments from the likes of Triple H, Vince, Stephanie, Linda, Dana and their two daughters. At times it can be too easy to point and say the tears are for show, but in this case, they are genuine tears of emotion at having lost a long-time friend.

Warrior’s wife (much like Vicki Guerrero after Eddie’s passing) has been accepted as part of the larger WWE family (as twee as that sounds) and his two daughters come across as bright, articulate little ladies, with Mattie laying the groundwork for being the most unlikely of second-generation wrestlers.

All of the footage from his return during the WrestleMania / HoF build to the backstage footage from his final appearance on RAW is both uplifting and sad. Uplifting because it gave him a fitting send-off and all of the emotional baggage had been shed. Sad, of course, because we were watching a man live out his final days live on TV.

Load the spaceship with the rocket fuel, load it with the Warriors and strap in for a fascinating documentary covering the life and career of a fascinating man.

When I reviewed The Ultimate Collection, I had written what would have been the final draft before he died, but hadn’t sent it to go on the site. Warrior then passed away and I felt that my review should be rewritten after watching the DVD again to give proper (and current) context.

With this set being released a year later, the same footage can be viewed from a perspective of distance from the rawness of his death.

There are loads of little things that make this a companion to Warrior’s last outing rather than just a repeat. Candid pictures of Warrior as a young bodybuilder meeting Arnold Schwarzenegger, Sting talking about watching WrestleMania VI and being a little jealous, the relationship between the Divas and Dana and the girls, Hogan taking the blame for Halloween Havoc 1998’s match sucking majorly and just the genuine heartfelt emotion from everyone.

There are a lot of matches here that few people will have seen and the third disc is pretty much just promos, which are worth watching just for reliving the giddiness you had as a kid when this massive face-painted man ranted about things you didn’t understand (Warrior was very big on metaphors), but you knew he meant every word.

As a last word, anything that gets “Iron” Mike Sharpe on WWE DVD in 2015 can only be a positive.