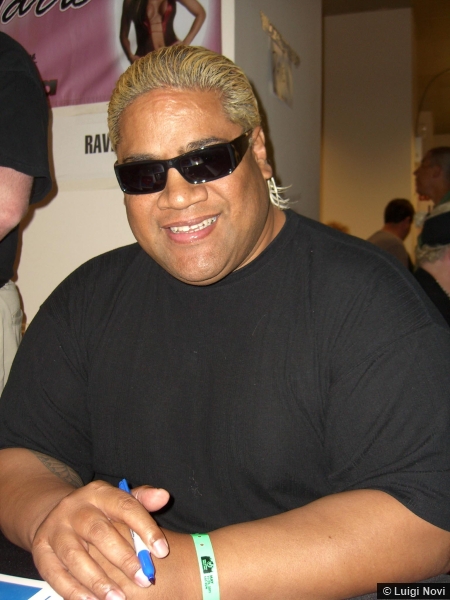 As first revealed by his twin sons, The Usos, on Twitter this past Monday and officially announced by WWE the same day, the dancing, fun-loving big man Rikishi (Solofa Fatu, Jr.) will join “Macho Man” Randy Savage and Arnold Schwarzenegger as an inductee in the 2015 WWE Hall of Fame. Though he performed under many different names, Solofa Fatu, Jr. was a regular performer for WWE for 12 years from 1992 to 2004.

A member of the famous Anoa’i family (which includes the likes his brothers The Tonga Kid and Umaga, his uncles The Wild Samoans, and his cousins The Rock, Rosey, Headshrinker Samu, Roman Reigns, & Yokozuna), Solofa made his professional wrestling debut for the Montreal-based International Wrestling in 1985 under the ring name, “Prince Alofa”, where he formed a tag team with his cousin, Samula, who took the ring name “The Great Samu”. Following the closure of International Wrestling, the two cousins made their way to Puerto Rico-based promotion World Wrestling Council (WWC), where they were renamed Samu (Samula) & Fatu (Solofa) and given the name, The Samoan Swat Team, inheriting the “Samoan savage” characters that The Wild Samoans famously portrayed for several years.

Samu & Fatu then made their way to Jim Crockett Promotions (the promotion that ultimately became WCW), where the team was managed by Paul E. Dangerously (Paul Heyman) after The Original Midnight Express left the company. Oliver Humperdink would take over as The Samoan Swat Team’s manager and, shortly after this, Samu & Fatu were joined by Fatu’s brother, The Samoan Savage (also known as The Tonga Kid). Samu would ultimately become a singles competitor and the team of Fatu & The Samoan Savage would become known as “The New Wild Samoans”. In the Summer of 1990, The New Wild Samoans left WCW, working for several independent promotions around the world with their cousin, Kokina Maximus (who would later become known as Yokozuna in the WWF) before Samu & Fatu would join WWF in 1992, reuniting as a tag team.

The Headshrinkers’ appearance at SummerSlam would prove to be their last as, soon after, Samu left the WWF to recover from various injuries, being replaced by Sione (formerly known as The Barbarian) as Fatu & Sione became known as The New Headshrinkers. As a team, The New Headshrinkers only made one pay-per-view appearance, competing in a 10-Man Elimination Tag Match at the 1994 Survivor Series. They would also appear separately in the 1995 Royal Rumble Match and, after failing to win a tournament to crown new WWF World Tag Team Champions, The New Headshrinkers would feud with Jacob & Eli Blu and their last match as a team was in London on June 22, where they lost to Men on a Mission, before Sione left the WWF for WCW, disbanding the team.

With his tag team partner gone from WWF, Solofa would get his first shot at finding success as a singles competitor, retaining the name Fatu but getting a gimmick makeover. No longer a “Samoan savage”, Fatu used his real life struggles growing up in the ghetto, including his involvement in a drive-by shooting where he was clinically dead for three minutes and was left with a scar on his stomach. Fatu would use the catchphrase, “Make A Difference”, occasionally being referred to as “Make A Difference Fatu”. However, the gimmick would not last long and, in 1996, Fatu was repackaged as “The Sultan”, a masked sultan who never spoke to his tongue apparently being cut out. The Sultan was managed by two future Hall of Famers in Bob Backlund and The Iron Sheik. During his two-year stint as The Sultan, The Sultan’s most notable match was at WrestleMania 13, when he unsuccessfully challenged Rocky Maivia (Solofa’s real life cousin) for the Intercontinental Championship. In 1998, The Sultan would disappear from WWF television as Solofa would left to train at Dory Funk’s Funking Conservatory wrestling school.

Solofa would return to WWF in November 1999 on an episode of WWF Metal as “Rikishi Fatu” (with “rikishi” being the Japanese term for a sumo wrestler), defeating Julio Fantastico. Rikishi’s last name was changed from “Fatu” to “Phatu” before ultimately dropping the last name altogether. With no mention of his previous gimmicks in WWE, Rikishi joined Too Cool (Scotty 2 Hotty & Grandmaster Sexay), donning blonde hair and his signature mawashi. After joining Too Cool for a post-match dance celebration one night, Rikishi became extremely popular with the fans and the post-match celebration became a trademark for the trio. Rikishi would also begin using his infamous Stink Face maneuver, which speaks for itself. Rikishi would have an impressive outing in the 2000 Royal Rumble Match, where he eliminated seven competitors before it took six competitors to eliminate Rikishi from the match.

Following a feud between Too Cool & Rikishi and Edge, Christian, & Kurt Angle that culminated at Judgment Day in May 2000, Rikishi would have the biggest night of his WWF career on the June 22, 2000 episode of SmackDown where he defeated Chris Benoit to win the Intercontinental Championship. Rikishi would then go on to an impressive performance in the 2000 King of the Ring tournament, making it past Chris Benoit in the Quarterfinals and Val Venis in the Semi-Finals, but after both men assaulted Rikishi with a steel chair after the match, it would pave the way for Rikishi to lose to Kurt Angle in the Finals. Shortly after this, Rikishi would lose the Intercontinental Title to Val Venis after Tazz attacked Rikishi with a television camera. At the Fully Loaded event, Rikishi would challenge Val Venis for the title in a rematch inside a Steel Cage where Rikishi hit an awe-inspiring splash from the top of the cage on Val Venis, but another attack from Tazz would prevent Rikishi from regaining the title.

In October 2000, Rikishi would admit to being the man behind the wheel of the car that ran over Stone Cold Steve Austin at the 1999 Survivor Series, which took Austin out of action for nearly a year (in reality, Austin required neck surgery and WWF used the hit and run angle to explain Austin’s absence). Rikishi claimed that he “did it for The Rock”, citing that his cousin wanted him to run over Austin to pave the way for The Rock to become the top guy in WWF, which The Rock denied. This led to a No Holds Barred Match between Rikishi and Stone Cold Steve Austin at No Mercy, but the match ended in a No Contest after Austin dragged Rikishi to the parking lot with the intent of running Rikishi over. Police interference prevented Austin from getting his revenge and, later that night, Rikishi would cost The Rock the WWF Championship. After Austin was repeatedly attacked by a masked assailant, it became apparent that Rikishi had an accomplice. The accomplice would later be revealed as Triple H, who revealed that he was the mastermind behind Rikishi’s hit and run on Austin.

While Triple H feuded with Stone Cold Steve Austin, Rikishi feuded with The Rock, culminating in a match between the two cousins at the 2000 Survivor Series. At Armageddon the following month, the first and only six-man Hell in a Cell Match took place where Kurt Angle successfully defended the WWF Championship against Rikishi, The Rock, Triple H, The Undertaker, & Stone Cold Steve Austin. Rikishi would be a part of the most memorable spot of that match where The Undertaker chokeslammed Rikishi off the top of the Cell into the back of a flatbed truck.

After a brief tag team with Haku in early 2001, Rikishi would have brief feuds with The Undertaker and William Regal, but a shoulder injury would sideline Rikishi for most of 2001. Rikishi would return to WWF on December 6, 2001, turning face by delivering a Stink Face to Vince McMahon. The WWE Brand Extension would then put Rikishi on SmackDown as a member of the SmackDown roster. At Judgment Day in 2002, Rikishi would take part in a “Secret Partner” Match, where he was teamed up with Rico, who was the stylist for the defending World Tag Team Champions Billy & Chuck. Despite Rico’s best attempts to help Billy & Chuck, Rikishi would still win the match, becoming one-half of the World Tag Team Champions with Rico. However, a rematch a few weeks later would see Rico cost himself and Rikishi the tag team titles, which went back to Billy & Chuck.

Rikishi was not featured much in WWE in late 2002 and early 2003 before getting involved in a feud with the returning “Rowdy” Roddy Piper over Piper’s treatment of Jimmy Snuka on Piper’s Pit. Rikishi would face Piper’s protege, Sean O’Haire, in a losing effort at Backlash 2003 due to Piper’s interference. Rikishi would then reunite with Scotty 2 Hotty, this time forming a tag team with the former Too Cool member and, as a team, Rikishi & Scotty 2 Hotty defeated The Basham Brothers for the WWE Tag Team Titles on February 5, 2004. Rikishi & Scotty 2 Hotty would hold the tag titles for over two months before losing the titles to Charlie Haas & Rico. Rikishi was then released by WWE on July 16, 2004 after being repeatedly asked by WWE to lose weight.

After eight years (which Solofa spent on the independent circuit under the ring name, “Kishi”, due to WWE owning the rights to the name “Rikishi”), Rikishi would return to WWE on RAW on July 16, 2012 (marking exactly eight years since his WWE release on July 16, 2004), being one of the many legends to defeat Heath Slater in the buildup to the RAW 1000 special, appearing with his twin sons The Usos in the ring for the first time ever as the father and sons danced in the ring. Rikishi would make another appearance on the aforementioned RAW 1000 special and would reunite with Too Cool on the January 6, 2014 episode of RAW where he and Too Cool defeated 3MB in a 6-Man Tag Match.

The 2015 WWE Hall of Fame Induction Ceremony will take place the night before WrestleMania on March 28 in San Jose, CA. While not officially announced, it is expected that Rikishi will be inducted by his twin sons, The Usos. Rikishi will be joining elite Samoan company in the Hall of Fame, including the likes of Yokozuna, The Wild Samoans (Afa & Sika), Peter Maivia, Rocky Johnson, & Jimmy “Superfly” Snuka.

What is your favorite Rikishi moment? Post your comments in the box below.