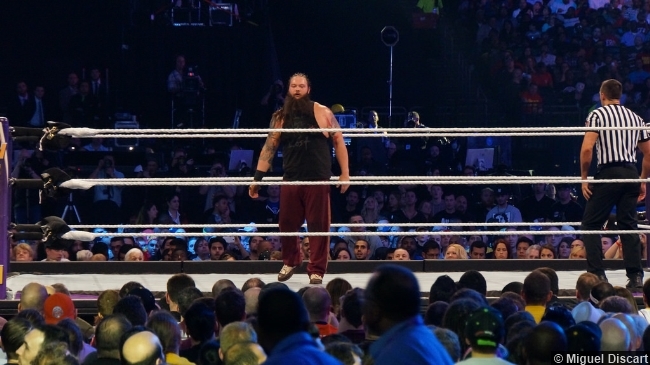 When The Smoke Cleared…

For the sixth year in a row, WWE would present its own version of a destruction derby as WWE TLC: Tables, Ladders, & Chairs…and Stairs came to you, live on the WWE Network, from the Quicken Loans Arena in Cleveland, OH. As the name of the event implies, WWE TLC will feature tables, ladders, chairs, and stairs and, in the “tables” portion, John Cena would put all of his hard work over the last couple of months on the line as the fifteen-time former World Champion would be forced to put his status as the #1 Contender for the WWE World Heavyweight Championship on the line when he faces “Mr. Money-in-the-Bank” Seth Rollins in a Tables Match, where the only way to win is by putting your opponent through a table!

Since Bray Wyatt’s surprising re-emergence at WWE Hell in a Cell to cost Dean Ambrose his match against Seth Rollins, “The Eater of Worlds” has been unrelenting in his quest to destroy Dean Ambrose from within with psychological warfare. However, “The Lunatic Fringe” has proven to be more than capable of waging his own psychological warfare, breaking Bray Wyatt down by destroying Bray’s symbolic rocking chair, but Bray’s attempt to end Ambrose’s career by driving a steel chair into Ambrose’s throat shows just how personal this rivalry has become. This personal rivalry between WWE’s two most unpredictable Superstars will certainly be taken to the extreme at WWE TLC as Dean Ambrose will face Bray Wyatt in a TLC Match, where tables, ladders, and chairs will not only be legal to use, but encouraged! Who will survive what is sure to be a knock-down, drag-out war with no holds barred and all the weapons two unstable Superstars like Dean Ambrose and Bray Wyatt could dream of?

One Superstar who has quickly become synonymous with the word, “survivor”, in recent months is Dolph Ziggler, who was the sole survivor for Team Cena at Survivor Series and Dolph’s survival on that night is what led to The Authority being removed from power. However, for all of his recent successes, “The Show-Off” has been unable to reclaim the Intercontinental Championship that was unceremoniously taken away from him by The Authority prior to Survivor Series. Since losing the title, Dolph has had two opportunities to reclaim the title from new champion Luke Harper, but on both occasions, Harper has taken the easy way out, either by getting counted out or disqualified. That would not be a factor at WWE TLC, however, as Dolph Ziggler challenges Luke Harper for the Intercontinental Championship in a Ladder Match, where the only way to win is by climbing a ladder and retrieving the Intercontinental Title belt hanging high above the ring.

After being on opposite sides at Survivor Series, Ryback and Kane have been battling each other for the last few weeks with Kane introducing steel chairs into the mix and, at WWE TLC, these two big men will be even more dangerous than usual when “The Big Guy” and the former Director of Operations square off with chairs in hand in a Chairs Match, where steel chairs will be legal. WWE TLC will be home to a first in WWE as, as a result of their battles with steel stairs in recent weeks, “Big Red” Erick Rowan will collide with “The World’s Largest Athlete” Big Show in the first ever Stairs Match, where steel stairs will be legal for both of the hard-hitters to use.

At Survivor Series, Brie Bella inexplicably helped her sister, Nikki, take the Divas Title away from AJ Lee in record time. Since then, AJ Lee has verbally ripped into The Bella Twins, taking offense to Nikki Bella treating the Divas Title as a valuable “accessory” rather than a championship and, at WWE TLC, the 2014 Diva of the Year would get the opportunity to right that wrong when AJ Lee challenges Nikki Bella for the Divas Title.

In what began as a straight-forward match for the WWE Tag Team Titles has now become extremely personal all thanks to The Miz. As soon as The Usos won Tag Team Turmoil a couple of weeks ago to become the new #1 Contenders for the WWE Tag Team Titles, The Miz would begin getting inside the head of Jimmy Uso by trying to court his wife, Naomi, with the promise of a bright future in Hollywood. Naturally, this has angered Jimmy Uso, who has warned The Miz to stay away from his wife, but the bickering between Jimmy and Naomi has proven that The Miz may have succeeded in getting inside the head of The Usos. Whether or not The Miz’s mind games have worked will be determined at WWE TLC when The Usos challenge The Miz & Damien Mizdow for the WWE Tag Team Titles.