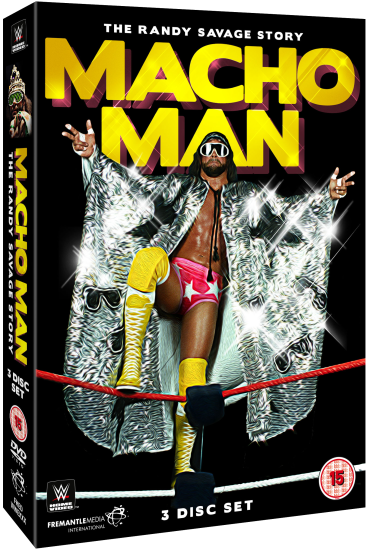 Prior to this release, Randy Savage was the ultimate pariah in WWE’s executive hallways and after watching this set, I believe that is still the case as it comes across as an attempt to say “Hey, look; we don’t have a problem with him”, possibly in the hope to deflect the constant speculation as to why there has been this whitewash of the man.

There is also the hope that, mostly down to Triple H’s influence and efforts, with burnt bridges have been mended with people like Bruno Sammartino and the Ultimate Warrior, this is an attempt to do the same.

The first disc is a 90min documentary featuring a bunch of talking-heads regailing us with stories of Randy Savage from his high school days until his untimely death in a car accident in 2011.

To open the documentary, various pieces of news footage reporting his death allow you to grasp the magnitude of his passing across the world, while a poignant introduction by Lanny Poffo (his brother and more famously known as “Leaping” Lanny Poffo and eventually The Genius) kicks us off proper.

The choice of talking-heads are relevant from different periods of his life and career, covering all bases as they include his mum, his brother, high school friends and coaches, Jimmy Hart, Dusty Rhodes, Ted DiBiase, Hulk Hogan, Kevin Nash, Jerry Lawler, Ricky Steamboat, Bret Hart, Lex Luger and, to showcase his influence, Sheamus and CM Punk (who famously adopted Savage’s top-rope elbow in homage to one of his idols – it’s also worth noting that Punk is listed as “Former WWE Superstar”).

On a side note, there is a talking-head interview with Savage from 1993 that pops up from time to time and is done out of character. I guess it’s a precursor to the shoot interviews of today.

90mins is not enough time to cover the 58yrs he spent on this Earth or indeed the 30-odd years of his wrestling career, so a lot of things get glossed over in the documentary. There is brief snippets of footage, but no actual mention of his time as “The Macho King” as well as no mention of his epic confrontation with Warrior at WrestleMania VII (long time readers of these reviews will know that this is my favourite wrestling match of all time).

What we get is a flash look at his start with his father, his trips to Memphis and then he’s in WWE. The rivalry with Steamboat obviously features heavily, but the tournament at WMIV gets only a passing commentary before we move on to the aftermath of him winning the title and the lead up to the creation / subsequent implosion of the Mega Powers.

Interspersed among this is a lot of comments from various old-timers about his real-life relationship with Elizabeth, including the infamous stories about Savage locking her in his room backstage due to his paranoia. It must be noted that Lanny refutes these allegations, but as he is the lone voice here against overwhelming evidence to the contrary, I can only assume he is merely defending his late brother because he can’t defend himself.

As stated, from WrestleMania V until his debut in WCW, this release wants to make you believe there was nothing of note from his in-ring career. It completely glosses over the fact he had a blistering rivalry with Jake Roberts following the aftermath of the wedding reception, including a still-mesmerising-to-this-day angle where Jake’s cobra genuinely bit into Randy’s arm on TV.

It also omits entirely his feud with Crush that culminated in the first ever Falls Count Anywhere Match on WWE television. That such an accolade is overlooked along with the omissions of his WrestleMania VII and VIII epics against Warrior and Flair, it lends credence to my theory that this is simply a pacification release and nothing more.

Interestingly, however, it does touch upon the widespread rumours of why he has been effectively exiled from the promotion, even going to far as to possibly hint that it has to do with Stephanie McMahon if you read enough into it.

That was a genuine surprise.

Liz’s death is touched upon in a respectful manner as the talking-heads discuss how hard it hit Randy as well as how hard it hit pretty much everyone she knew and everyone who was a fan during her time on top. The sadness is lifted though when it gets to the moment in time Savage is reintroduced to his high-school sweetheart he broke up with to pursue a career in wrestling.

To see that he was truly happy in his final years was a genuinely touching moment on the DVD and would have been a fitting end to his tale were it not for his untimely passing. The documentary, like his love life, comes full circle to close us out on the events leading up to his death and the fallout from it.

It’s a downbeat ending, but they couldn’t really close it out any other way.

The documentary is great, if not far too short, and the matches on the other discs are, for the most part, fantastic. They also include a lot of house show bouts that very few people will have seen, which is always a nice bonus.