WrestleMania is only a few days away! Yesterday Tony gave his favourite WrestleMania match, today is my turn… 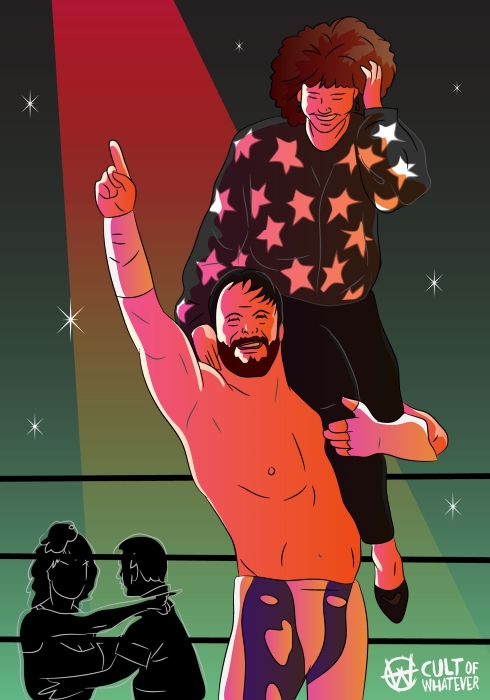 The story leading up to the bout was a simple one; Warrior had lost the WWF Championship to Sgt. Slaughter courtesy of inteference by Randy Savage. They continued to antagonise each other until a “Retirement Match” was signed between the two and would be the semi-main event just below the Hogan/Slaughter match at WrestleMania 7. The fact that The Ultimate Warrior walked to the ring tells you all you need to know about how important this match was being pushed as and that the retirement stipulation was being treated deadly seriously. Randy Savage, now known as The Macho King and with Sensational Queen Sherri by his side (the two had been together for a while, having also teamed up against Dusty Rhodes and Sapphire in a comedy-esque mixed-tag match) and the “King” looked ready for business in a dazzling blue and silver wrestling outfit. Not unlike the Warrior’s match from the previous year, this was a psychological master-class from the moment the wrestlers appeared through the curtain. Bobby Heenan and Gorilla Monsoon were on fire during their commentary and really added to the spectacle.

The battle went one way and then the other, with Warrior surviving a sequence of top-rope elbows (beautifully sold by Heenan) and Savage returning the favour by kicking out of Warrior’s Gorilla Press & Splash combo. This should be used as a lesson as to how to get across kicking out of a finish and making it mean the world (which, by rights, it should). The actual end sequence is perfectly played out and having the match end with Warrior standing triumphant, one foot of Macho King’s chest, as the referee counts to three is a stunning visual… only to be topped by what happens after the bell.

Miss Elizabeth, who has been in the crowd for the event (the camera pans to her every now and again), watches on as Sherri, livid that her meal-ticket has been stamped out, attacks a brutalised and beaten Savage until the first lady of the WWF can take no more. With the fans screaming their support, Elizabeth charges the ring, tosses Sherri over the top to the floor and, after the obligatory confusion as Savage thinks Liz was the one attacking him, they embrace in the middle of the ring to a huge ovation. On a final note to signify Randy’s startling face turn, he holds the ropes open for Elizabeth so she can exit the ring. This was huge because he had never done this and always demanded she do it for him. He may have lost in the best match Warrior has ever been in and, perhaps, the most emotional he had ever competed, but he won back the woman he loved and the adoration of the fans. Even in defeat, Randy Savage came out a winner.