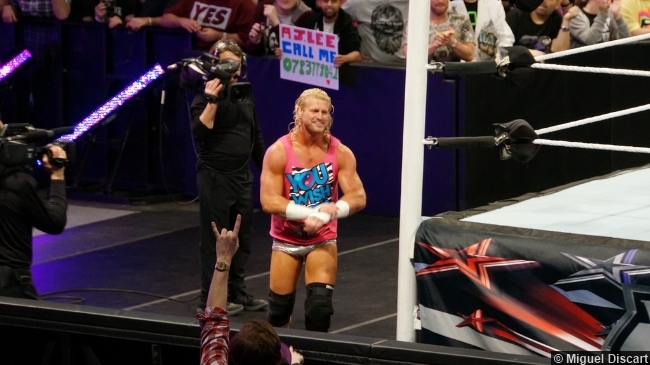 SmackDown kicks off in a big way as a steel cage surrounds the ring for the opening match of the night as Gold & Stardust would defend the WWE Tag Team Titles against their longtime rivals, The Usos, in a Steel Cage Match, where the only ways to win are by pinfall, submission, or escaping the cage, either over the top of the cage or through the cage door, with both feet touching the floor! At the end of a hard-fought match, The Usos would appear to have the tag titles within their grasp as Jey Uso hits the Superfly Splash on Goldust, but Stardust would show his resourcefulness, quickly hooking Jey Uso with a roll-up, surprising Uso and picking up the three-count to successfully retain the WWE Tag Team Titles.

After assisting in the annihilation of Randy Orton on RAW, The Authority’s Director of Operations Kane made an appearance on SmackDown. Kane said that, with Survivor Series looming, they had to make a decision regarding Randy Orton, saying that Orton made them question his “loyalty”. Kane then proclaims that you are either “with” The Authority or you are “against” The Authority, saying that the “battle lines” have been drawn and Superstars should “choose wisely”. Kane continues, saying that Dolph Ziggler could have had it all, but he opted for the “admiration” of the fans and Dolph thinks that he can “survive” if he aligns himself with John Cena. Kane then puts himself in a match later tonight against Dolph Ziggler and, not only that, but it will take place inside a steel cage!

Kane then says that Team Authority now has an open spot that needs to be filled, saying that he has a “potential recruit” that has everything that it takes to be on Team Authority. However, Kane is interrupted by Cesaro, who makes his way to the ring, telling Kane that if The Authority is looking for someone who can “swing John Cena like a ragdoll”, then Cesaro is their guy. The Director of Operations admits that he was not talking about Cesaro, but if “The Swiss Superman” is serious about a spot on Team Authority, then he can prove it in a match against the potential recruit he was talking about.

With that, the “potential recruit” makes his way to the ring as “The Big Guy” Ryback would go one-on-one with Cesaro in an impromptu match with Kane seated at ringside. While Cesaro would give “The Big Guy” a run for his money, Ryback would persevere, hitting Cesaro with Shell Shocked and picking up the win. After the match, Kane would applaud Ryback’s win, making a move towards Ryback to extend an invite to Team Authority, but Ryback would exit the ring, either not noticing the Director of Operations or showing no interest in joining Team Authority.

Then it was time for the return of The Peep Show and the return of Christian as “Captain Charisma” appears on SmackDown. Christian says that he wants the opinions of the fans, asking who is on Team Cena’s side and who is on Team Authority’s side. However, Christian’s guest would not wait for a proper introduction as “The Lunatic Fringe” Dean Ambrose makes his way to the ring, joining Christian on The Peep Show. Christian asks why Bray Wyatt attacked Dean Ambrose at WWE Hell in a Cell and Ambrose says that he doesn’t have a championship, so he’s not sure what Bray wants. Ambrose says that nobody truly knows him, saying that he likes “danger” and he is “not afraid” to go down any dark alley with Bray Wyatt.

With smoking lantern in hand, Bray Wyatt then makes his eerie arrival as “The Eater of Worlds” takes a seat in his rocking chair on the stage. Bray tells Ambrose that Ambrose has “nothing to fear” because Ambrose has “nothing to lose”, saying that there was a time when Dean Ambrose had safety and security as a part of The Shield. Bray says that the security was taken away from Ambrose and it has left Ambrose “gasping for air” before saying that he “healed” Luke Harper and Erick Rowan and he can “heal” Dean Ambrose too! Bray Wyatt says that he understands that “salvation is not for everyone”, saying that he tried to save Daniel Bryan, but Bryan “defied” him and, now, Bryan is nowhere to be seen. Bray then gets personal, saying that Ambrose’s father turned his back on his own son, asking if Ambrose’s father still sends him postcards from prison! Having heard enough from Bray Wyatt, Dean Ambrose exits the ring, but when “The Lunatic Fringe” gets close to Bray Wyatt, the lights go out and Bray disappears. However, the lights would come back on and Bray would be standing right behind Ambrose, shouting “run” in Ambrose’s ear before the lights flicker again and Bray disappears again.

Backstage, Divas Champion AJ Lee is being interviewed, saying that Brie Bella slapped her on RAW because Brie’s “evil twin sister” is the #1 Contender for the Divas Title and she wanted to prove a point. Brie Bella then confronts the Divas Champion, apologizing for her actions on RAW. AJ says that Brie does not need to apologize, saying that she understands that Brie has no choice but to obey her sister’s orders, saying that Nikki Bella is willing to do “anything” to get the Divas Title. The interview then comes to a halt when Nikki Bella attacks AJ Lee from behind, knocking the Divas Champion to the floor and telling Brie “good job”. Nikki then tells Brie to be “more sincere” next time, ordering her sister to follow her.

After Natalya caught her husband, Tyson Kidd, talking to Layla & Summer Rae backstage, Natalya would go one-on-one with Summer Rae, with Layla in her corner, on SmackDown with Tyson Kidd a guest on commentary. During the match, Tyson Kidd would shout instructions at his wife, distracting Natalya long enough for Summer Rae to take advantage as Summer rolls Natalya up for the win.

Backstage, an interview with Intercontinental Champion Dolph Ziggler is interrupted by WWE COO Triple H, who tells the Team Cena member that Randy Orton is not there to save him like he did on RAW and John Cena is not there either. Triple H then asks Dolph who is going to save them before telling the Intercontinental Champion that it’s not too late for Ziggler to join Team Authority, telling Ziggler that, if The Authority could destroy Randy Orton like they did on RAW, then imagine what they could do to Dolph Ziggler.

Then it was time for the main event between opposing Survivor Series team members as Team Cena member and Intercontinental Champion Dolph Ziggler would face Team Authority co-captain and The Authority’s Director of Operations Kane in a Steel Cage Match! After the Zig Zag failed to put Kane away, Dolph Ziggler would try to exit out of the cage door, even planting Kane face-first into the exposed steel turnbuckle, but with Kane blocking the door, Dolph would use the Director of Operations as a stepping stone to climb to the top of the cage. However, when Dolph is climbing down the outside of the cage, Kane kicks the door open, catching Dolph in the mid-section! With Dolph lying prone on top of the swinging cage door, Kane lays in a big boot to Dolph, but when Kane tries to walk out of the cage, Ziggler comes back to life, grabbing the top of the cage and using his feet to kick the door right into Kane’s head! Even with Kane desperately grasping at the door, trying to stop Dolph Ziggler, the Intercontinental Champion lands with both feet on the floor, winning the match and escaping Kane’s sinister plans to cripple Dolph Ziggler and Team Cena.