Matt Hardy along with his brother Jeff is one-half of one of the greatest tag teams to ever step foot inside the squared circle for both WWE and TNA.

The Hardy Boyz are well known for their extreme high-flying style taking part in ladder and TLC matches. Matt and Jeff are seven-time tag team champions, having won the World Tag Team titles six times and the WCW Tag Team titles once.

We caught up with Matt to talk about his influences growing up, the TLC matches and up and coming tag teams to be on the lookout for plus much more. 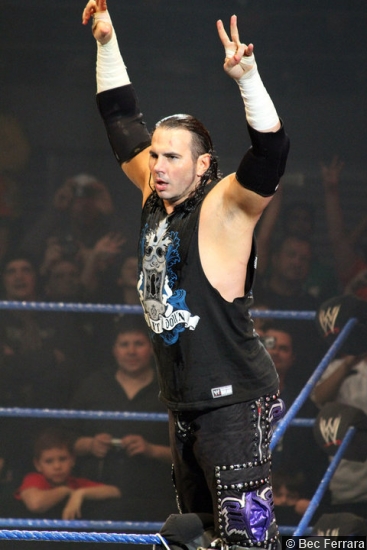 What was it like growing up with your brother Jeff and how did you both get into the sport of professional wrestling?

Growing up with Jeff in Cameron, North Carolina was really special and I think that is where we forged personalities as well as our ability to work hard, it also allowed us to dream and be very creative. We grew up with 100 acres with no neighbours or anything close to us and if we were going to be entertained we were going to have to do it ourselves, we had to be creative, we would build hideouts and create different characters. That was the first time I ever dreamed of being a professional wrestler and having a persona.

When we would watch TV we fell in love with wrestling whether it was NWA or WWF. We begged our dad for a year to buy us a trampoline and when he got us a trampoline for Christmas we started putting together some moves – I was always the Macho Man Randy Savage and Jeff would be Sting, we would emulate our favourites.

We then decided to turn the trampoline into a ring by cutting down some trees to use as ring posts and we tied some rope around them for the ring ropes. We then saved up for a video camera to film what we were doing. We just loved everything about the wrestling business and we worked hard to follow our dream and here we are in 2014 still wrestling for TNA on global TV.

Who were the wrestlers that you enjoyed watching whilst growing up and did you and Jeff enjoy the tag teams?

Randy Savage was definitely my favourite wrestler, he was the guy that really got me hooked and was the reason why I loved professional wrestling, Sting was always a favourite for both Jeff and I and we both really enjoyed watching Shawn Michaels and Bret Hart.

As far as tag teams go we were, of course, fans of The Rockers and The Rock ‘N’ Roll Express, the Midnight Express was another team we really enjoyed watching. The Road Warriors were just awesome and they had such a distinctive look, they were like living breathing superheroes. I like to think The Hardy Boyz are a mix of all of those great tag teams. 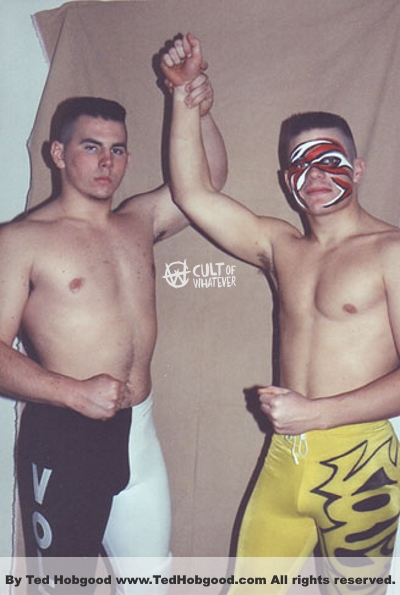 What was it like being trained by Dory Funk and coming through in the same class as Christian and Kurt Angle?

That was a truly honourable experience training with Dory Funk, we had done quite a bit of training before that but getting the opportunity to go to the Funk Dojo was pretty special. It was a great experience to tighten up on the fundamentals.

It was really interesting when Jeff and I first met Christian because he was so much like us, a young kid who had a dream and it was really cool to work with people that you could relate to and who were at the same point in their careers as us.

I remember the first time I met Kurt Angle at the Funk Dojo and professional wrestling was quite foreign to Kurt but once he got the hang of it, it was totally obvious he was going to be one of the greatest of all time.

What was it like when you made your WWE TV debut as The Hardy Boyz?

Once we signed the contract and got on television as members of the actual roster it was a dream come true – it is what we wanted as kids and in our minds, if we won the tag team championships one time we would have achieved our dream.

Fortunately, we were able to win the tag titles multiple times, but every time I team up with Jeff it is special to me, we grew up together less than three years apart and every time we team together it’s magical.

That period in WWE was a great era of Tag Team wrestling with yourselves, Edge & Christian and The Dudley Boyz – what was it like working with those guys and the TLC matches?

The timing was on our side no doubt, we actually had a feud with Edge & Christian first and competed in the first-ever tag team ladder match. Then the Dudleys came in from ECW not long after and we all just kind of fitted well together. Both of those teams were very special for Jeff and me to work with, those TLC matches were incredible and fifteen years later people still come up to us and talk to us about those matches.

Over the past month or so on TNA IMPACT! Jeff and I have been involved in a great series of matches for the TNA Tag Team titles against Team 3D and The Wolves. We’ve had a Tables match, a Ladder match and a TLC match and all of those were incredible matches to be involved in and they are of the highest level fifteen years after Bully Ray, Devon, Jeff and I started doing these types of matches. It is really amazing that The Dudley Boyz and the Hardy Boyz have stood the test of time.

Who are some of the up and coming tag teams that you like the look of?

There are a lot of really good tag teams out there at the moment, The Wolves are awesome, they’re the current TNA Tag Team champions and Jeff and I have just had some incredible matches with them along with Team 3D.

At the moment the TNA roster has quite a few really good tag teams and there is something for everyone and they all have their own personas. The BroMans are very entertaining whereas the Brits Bram and Magnus are a little bit more of a hardcore team. It is great to see Tag Team wrestling being taken seriously by TNA.

The Young Bucks are another great team that we’ve had matches with and are currently doing some great work in Japan for NJPW. Every time we’ve shared a ring with the Young Bucks we have had great matches.

Another tag team that I have to mention and are just awesome is The Briscoe Brothers, Jeff and I have had some excellent matches against them on our OMEGA shows.

You are currently working for both ROH and TNA, how would you compare the two companies?

I would say TNA still promotes itself more towards the casual wrestling fan as opposed to ROH who have more of a niche audience. ROH has a great product but I think they would be assisted by having more storylines and allowing their characters to evolve as time goes on.

TNA, on the other hand, is a more commercially viable product and I think they have a good balance where they don’t go as crazy as WWE do on the storyline side of things but have great wrestling matches and the storylines are still good, so IMPACT Wrestling, in my opinion, are heading in the right direction.

What is your current contract situation with TNA?

I’m just working freelance, I’m still not under contract with TNA, I’m kind of on a pay per television appearance deal with TNA at the moment and that seems to be working well for all the parties involved.

I think social media has become extremely important for anyone that is in the entertainment world and especially wrestling. If you go on television and you have eight minutes to tell your story and explain your persona, YouTube and Twitter allows you to add to that – it gives guys who may not have had the opportunity on television the opportunity to still excel. As with everything it is trial and error, there will be some things that work and there will be some things that don’t work.

With Twitter and YouTube, it is important for people to embrace it and to build your own brand and I think it is a crucial part of the business these days.

How would you compare your WWE boss Vince McMahon and your TNA boss Dixie Carter?

It is really hard to compare them, Vince and Dixie use different systems to run their companies, they come from different backgrounds. I don’t think it is fair to compare anyone to Vince McMahon, I think everyone should look at Dixie Carter no matter if they love or hate her and they should appreciate that she has kept TNA alive for this long.

The fact is if it wasn’t for IMPACT Wrestling there would be a lot of great guys and girls who wouldn’t be getting a paycheque. I can’t say anything bad about Dixie Carter, has she made mistakes along the way, sure, I’m positive she has but she has been really good for the wrestling business putting her money and time into IMPACT Wrestling making it what it is today.

What are some of your personal highlights from your career?

One of my personal favourite highlights was the rivalry I had with MVP when we were doing all the different competitions against one another because that is something we created ourselves.

You’ve achieved so much throughout your career, are there any goals you still have that you want to achieve?

One thing that I’ve kind of promised myself after I had wrestled for so long and been with WWE was that I was going to take a year and a half off because I was just so hurt and beat up. I promised myself that I would pace myself, I don’t like setting myself up for failure by putting too much stress and pressure on myself.

The thing that I want to do now more than anything else is for every match I compete in to be the best it can possibly be and I want to have fun in the process and I want the audience to be blown away by it.